Get the app Get the app
Get the latest news on coronavirus impacts on general aviation, including what AOPA is doing to protect GA, event cancellations, advice for pilots to protect themselves, and more. Read More
Already a member? Please login below for an enhanced experience. Not a member? Join today
News & Media Proficiency: Needle work

By Steven Mark Sachs
Sure, we fixed-wing pilots know how to land in visual conditions. Three degrees or so, look at the whole runway, pick your spot, and go for it; maybe use less flaps in squirrely winds, appreciate VASIs and PAPIs, maybe use a little crab, and pay attention to ground effect. Sloppy landings infuriate CFIs, but “any landing you can walk away from is a good landing,” right? Maybe. 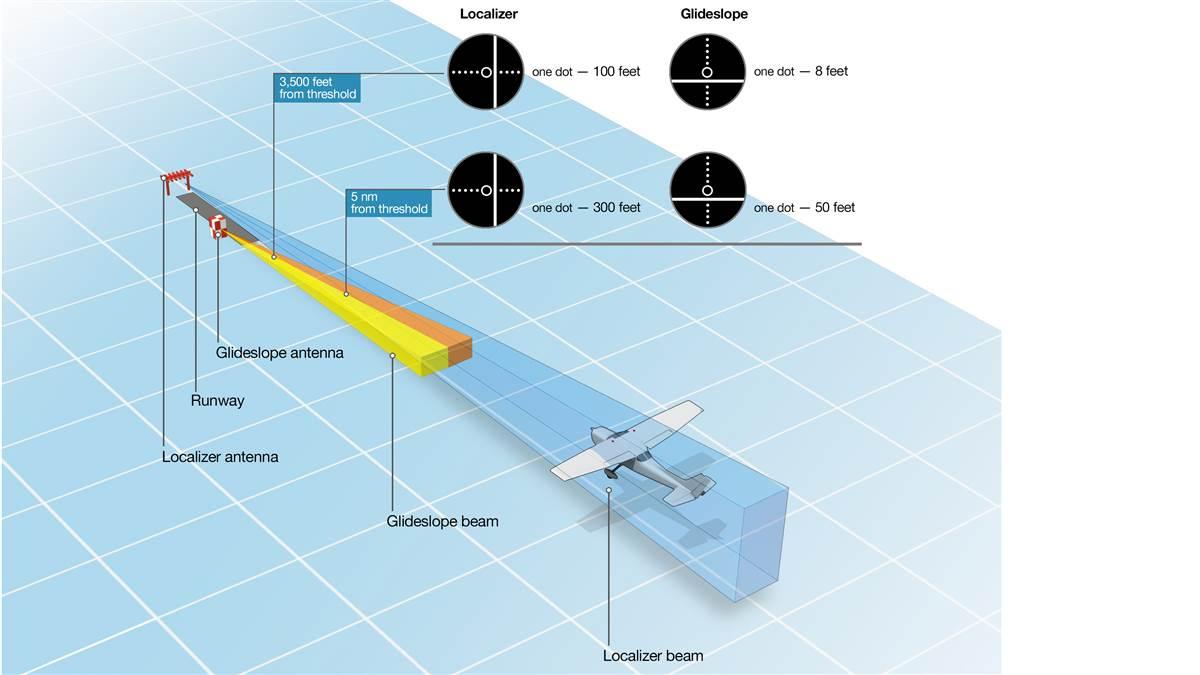 VFR pilots can practice following ILS guidance—provided they follow the rules for visual flying. The localizer and glideslope pointers become more sensitive closer to the runway.

VFR pilots can learn to fly more precise approaches and relate to their instrument cluster more effectively using an approach I call the VFR ILS. Besides that, this taste of instrument flying may motivate you to check further into instrument training and the rating itself.

An instrument landing system is a set of radio signals that provides guidance for the pilot beginning several miles away from the airport. In instrument conditions, pilots flying IFR can use the ILS to descend through clouds to a designated decision altitude, at which point they must see the runway environment to continue the approach. VFR pilots can practice using ILS guidance in visual conditions, but visual flight rules for cloud clearance, visibility, and traffic separation still apply.

The pointers the pilot watches during an ILS approach act somewhat like a standard VOR’s course deviation indicator (CDI), and the CDI itself is part of the ILS depiction. However, the pointers are far more sensitive.

The localizer is the guidance radio signal that usually begins at the far end of the runway and extends up to 18 miles out along the extended runway centerline. Its purpose is to provide left-right (horizontal, or lateral) guidance to the runway. The CDI is used during the ILS to track the localizer.

The glideslope provides up-down (vertical) guidance for the ILS approach. The glideslope is depicted on instrument-capable VORs as a more-or-less horizontal bar with its fulcrum usually pinned to the left edge of the VOR display. In some instruments, such as horizontal situation indicators, the bar moves up and down while remaining horizontal.

Instrument approach procedures such as ILS approaches are designed to keep pilots on an obstacle-free descent path to the runway in instrument conditions. On a perfect ILS, both the localizer needle and the glideslope needle are centered all the way down to just before landing.

VFR pilots may be permitted to fly the ILS as a special straight-in approach to the runway in VFR conditions only. At a towered field, you must first get your clearance from ATC to land straight in. Because instrument traffic may be on the same approach, make initial contact with ATC earlier than usual.

A VFR pilot flying a VFR ILS cannot receive an IFR clearance to do so. Also, do not request a “practice instrument approach” or “practice ILS”—this terminology refers to procedures for pilots training with an instrument instructor. Still, it’s vital to let the tower know your intention is to follow the ILS in toward the airport.

Before flying a VFR ILS into a nontowered field, consider whether a straight-in approach there is advisable. Other pilots will be scanning the pattern, and you won’t be in that pattern.

If you decide to try this at a nontowered field, report any VFR reporting points. Include that you’re landing “straight in.” Don’t refer to the ILS intersections you’ll see on the approach plate because VFR pilots won’t know what you’re talking about or where you are.

To fly an ILS, you must tune in its frequency and identify it as you would a VOR. You’ll find its frequency on the ILS approach plate, a chart with the full description of the approach for the place you want to land. AOPA provides free government versions of approach plates online (www.aopa.org/destinations). Check notams to ensure the ILS is not inactive for your planned flight.

Although an approach plate has lots of information that you can ignore for a VFR ILS, there is some stuff you must know:

Be careful: Some ILS approaches are called “back-course,” and you’ll need your instrument rating to even consider handling one. An ILS where the shaded part of the long arrow (looking down the arrow in the direction the approach is flown) on the chart is on the left half is a back-course ILS.

Let’s say that you’re a few miles out, the tower has cleared you for a straight-in approach, and has acknowledged that you are planning to follow the ILS. You have already tuned the ILS in and confirmed it with the four-letter Morse code identifier. Now what?

Join the localizer by aligning yourself with the extended runway centerline. As you do so, the CDI will center. Keep it centered by making small corrections.

You will also need to center the glideslope needle. Your job now is to keep both the vertical and horizontal needles centered all the way to over the runway—all the while scanning outside the airplane.

Your finesse at keeping both needles centered is what gets you down the ILS properly. Tiny corrections are all that are needed. As you get closer to the runway, the corrections get even smaller. A couple of feet off can cause the needles to swing wildly.

It’s not a bad idea to do the first several of these while paying attention to the localizer only, then adding in the glideslope as you get better. You absolutely must keep watching outside. Flying the VFR ILS does not remove any of your VFR pilot responsibilities, and it does not make you an instrument pilot.

Doing this without outside visual reference is significantly more demanding, but that’s what formal instrument training with a CFII is for. Go for it!

Steven Mark Sachs is an instrument-rated private pilot, and a ground instructor.