Get the app Get the app
News & Media Singular sensation

Bermudian Valley Airpark outside Harrisburg, Pennsylvania, is like a lot of small airfields across the country: part airport, part living museum, part community center for local pilots and aviation enthusiasts. Among the antique and replica aircraft on the 2,200-foot grass strip is a yellow 1936 Taylor J–2 Cub flying with what appears to be half a propeller. The Cub belonged to Eugene Breiner, a retired FAA inspector and expert in classic aircraft who had been a longtime mentor and friend to the vintage aircraft community in central Pennsylvania. The 1938 Everel single-blade propeller is an artifact of aeronautical innovation with a legacy somewhere between those of the Spruce Goose and Molt Taylor’s Aerocar. 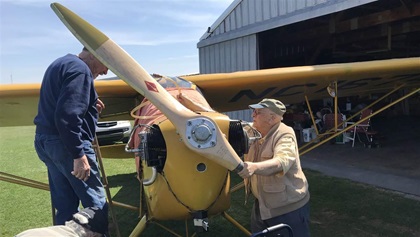 Gene Breiner started building model airplanes at age 7. He didn’t think he could become a pilot because of poor eyesight, but that didn’t keep him away from airplanes. He became an aviation mechanic and, with glasses, earned his pilot certificate. Breiner made his 1936 Taylor J–2 Cub with the single-blade Everel a kind of airfield mascot, inviting other pilots to drop by and fly his airplane, offer their thoughts, or just hang out.

The story of the Everel propeller begins in nearby Lancaster, Pennsylvania, where it was produced in the mid-1930s. While most engineers of the time were debating the performance advantages of three-blade props over two-blade props, or four-blade over three-blade, Baltimore-based inventor Walter Everts must have been a contrarian, arguing that a one-blade propeller was the most efficient. He calculated that the single-blade propeller not only had less drag than its two-blade cousin, but that it moved more cleanly through the slipstream (although, as Breiner explained last spring, the propeller blades on a moving airplane are always cutting through “clean” air as they auger forward).

Everts took his eccentric innovation one step further, creating not just a counterweighted single-blade propeller, but one with a blade that freely pivots on an ingenious hub, allowing it to automatically change pitch in flight. As the center of pressure on the blade changes, the propeller’s pitch changes with it. At full power on takeoff, the blade pivots to fine pitch. At reduced power in cruise, it pivots to coarse pitch.

Everts and partner Frank Ellington combined their names to create the Everel Propeller Corporation. They hired the Sensenich brothers in nearby Lititz, Pennsylvania, to carve the blade, and got Jesse Jones—a well-known local aviator, former barnstormer, and founder of the nearby airport—to flight test and market the propeller.

As Jones later recalled, things didn’t go well at first: “As soon as the engine was started, the plane began to vibrate; and by the time the throttle was halfway open, some of the cowling had been completely vibrated off the plane, and the front of the engine had a definite drooping appearance.”

Everts made some design changes, and on January 25, 1937, Jones gently lifted his Cub into the air to complete the first flight with a single-blade propeller. Soon after, he took off on a coast-to-coast publicity tour in a 145-horsepower Cessna Airmaster outfitted with a one-blade Everel. En route, he’d pull stunts such as calling the control tower on approach, saying he was coming in with only one blade on his propeller.

With an enthusiasm bordering on obsession, Breiner set out to learn the secrets of the Everel.“Oh, my God!” the startled controller would exclaim. With emergency vehicles and a crowd gathered to witness the unfolding disaster, Jones would execute a perfect three-point landing, taxi up, shut down, and climb out with a shrug.

Jones’ daughter, Jessie Jones Eckhart, was 12 years old at the time, but she remembers the period as an exciting time in her life. “There was always something exciting going on and new people around,” she said. Now 93, Eckhart went on to become a fixture in the Lancaster aviation community, teaching generations of aviators, both military and civilian. Among her mementos is an Everel propeller on display in her living room.

The Everel propeller got a lot of publicity, but that publicity did not translate into a lot of sales. Only a hundred or so were sold. One of the issues with the propeller was that it was heavier than a two-blade propeller—a major drawback for an airplane with a 40-horsepower engine. A bigger problem was its cost. Where a two-blade Sensenich at the time cost around $27, the Everel cost around $270—a hefty price given that the cost of a Cub in 1938 was only around $1,000. The 145-horsepower version of the propeller was certified by Everel but never went into production.

Everts likely didn’t make a dime off his invention, Eckhart said. The patent for the hub was licensed to the Koppers Corporation of Baltimore, which made the two-blade Aeromatic propeller with automatic pitch control. The Aeromatic design later was built by Univair, and it is manufactured by Tarver Propellers today for homebuilt aircraft only. By the mid-1940s, the Everel name was pretty much forgotten, and today the one-blade propeller has been relegated to a topic shared among RC modelers.

Gene Breiner first soloed in 1945. After a stint in the U.S. Air Force working as a mechanic, he ran a shop in Danville, Pennsylvania. In 1963, he began working as an inspector for the FAA, retiring in 1989. The aviation community in central Pennsylvania is tight-knit, so Breiner and Eckhart were well-acquainted. Although Breiner had long known about the Aeromatic propeller, he never knew about its roots in the one-blade Everel—that is, until the day he stopped by to visit Eckhart and saw the propeller in her living room.

Breiner, with an insatiable curiosity for all things aviation-related, learned everything he could about the Everel—reviewing patent drawings, certification papers, magazine articles, and promotional literature. Then, working with friend and machinist Larry Kropp, he cleaned and mounted Eckhart’s prop onto Breiner’s J–2 Cub for a test. After some initial adjustments, the propeller ran surprisingly smoothly.

Encouraged, Breiner decided to show off the propeller, and began taking it to local fly-ins and airshows. Then, at the Sentimental Journey Fly-In at Piper’s former factory in Lock Haven, Pennsylvania, in 2014, with the prop mounted onto friend Mark Stewart’s J–2, disaster struck.

Steve Krog, a well-known Cub aficionado who also runs a flight school specializing in Cubs, was invited to take the airplane up for a quick circuit around the field. Without performing his usual preflight check, Krog hastily climbed in. As he later reflected, “I broke my cardinal rule number one—familiarize thyself with the airplane!”

Kropp remembered sitting with Breiner beside the runway watching Krog’s takeoff run, which was taking far too long. “We stood up and were frantically waving to make him stop,” Kropp said. To no avail. The airplane lifted off anemically. A stuck valve crippled the number 3 cylinder. By the time Krog realized the predicament he was in, it was too late. The airplane stalled and crashed into a neighbor’s backyard. Luckily, Krog emerged unscathed, but Eckhart’s propeller blade was shattered.

With an enthusiasm bordering on obsession, Breiner set out to learn the secrets of the Everel. He did a variety of tests on the new prop to evaluate the performance of the propeller, comparing climb rates, cruise speeds, and takeoff runs between the single-blade and two-blade propellers. Kropp set up a boom extending from below the Cub’s nose on which they mounted a camera that looked through the propeller disk, to see if they could capture the propeller’s pitch change in flight.

At Bermudian Valley, Breiner’s J–2 with the one-blade Everel became a kind of airfield mascot. Eager to share this odd bit of aviation history, Breiner invited other pilots to drop by and fly his airplane, offer their thoughts, or just hang out. And despite failing health, Breiner continued tinkering and making plans.

During a visit to Bermudian Valley, Kropp attached a 100-pound scale between his truck’s trailer hitch and the Cub’s tailwheel to compare thrust levels between the Everel and the standard Sensenich two-blade prop. (Breiner, 92, was in failing health and got updates at home. He died shortly thereafter, in August 2018.) As pilot John Machamer manipulated the controls, Kropp noted the numbers through various power settings. At every power setting, the two-blade prop pulled more weight than the single-blade.

“It only kills half as many bugs, so if your objective is to kill bugs, it’s a failure.”—Larry KroppWatching from the ground, there’s no noticeable difference between the Cub with the two-blade prop and single-blade prop other than a slightly different sound, probably owing to the difference in the size and shape of the blades. From the cockpit, there doesn’t seem to be any difference in the way the airplane feels or handles between the two propellers, but given the minimal instrumentation in the J–2, it’s difficult to make hard comparisons. According to Machamer, the aircraft needs a longer takeoff roll with the Everel and has a more sluggish climbout than with the two-blade prop.

Breiner learned the Everel propeller is also finicky. Whenever it’s humid or cold, it goes out of balance, requiring the counterweights to be adjusted. And from the videos taken, the automatic pitch change doesn’t really seem to work as advertised. Once the power comes off idle, the propeller seems to pivot to fine pitch and stays there until shutdown (the Aeromatic propeller modified the design, adding a set of spring-loaded counterweights to assist in pitch changes).

“As compared to the two-bladed propeller, it only kills half as many bugs,” Kropp said. “So, if your objective is to kill bugs, it’s a failure.”

The propeller “works as an idea,” Breiner had said, but it’s not really practical. Was it a failure? Perhaps, but failure has always been part of aviation’s progress—a way of finding the limits of innovation. The Everel succeeded where a lot of oddball innovations never got off the ground. And thanks to people like Breiner, it still has the power to turn heads and amaze.

Tom LeCompte is a freelance writer and instrument-rated private pilot.