Backlit by the golden light of a California sunrise, the jagged Sierra Nevada are inviting and imposing.

Flying the ICON A5

My route from the Icon Aircraft factory in Vacaville, California, to the East Coast requires vaulting the Sierras on the first leg, then the Rockies on the next. That’s a lot to ask of any light sport aircraft, especially a seaplane that had so recently rolled off the production line.

“VFR altitude, your discretion,” a helpful air traffic controller for low-lying Sacramento told me as soon as I checked in and asked for VFR flight following. “Climb on course.”

I had gone through Icon’s A5 checkout course two years ago, but all of that flying had taken place at low altitudes on and off the water at Lake Berryessa near Vacaville. This multi-day, transcontinental journey (which happened to closely follow the original transcontinental railroad) would be my real-world introduction to the aircraft that has drawn so much anticipation, expectation, and controversy during the company’s decade of existence.

Alone in the airplane with full fuel (20 gallons) and about 50 pounds of gear and baggage on a 70-degree Fahreneheit morning, I climbed at full power to 11,500 feet and monitored the temperatures and pressures on the fuel-injected Rotax 912 iS engine (which remained normal during the 20-minute stress test). Level at 5,000 engine rpm, the airplane indicated 70 KIAS while burning just 3.5 gallons of unleaded gas an hour. 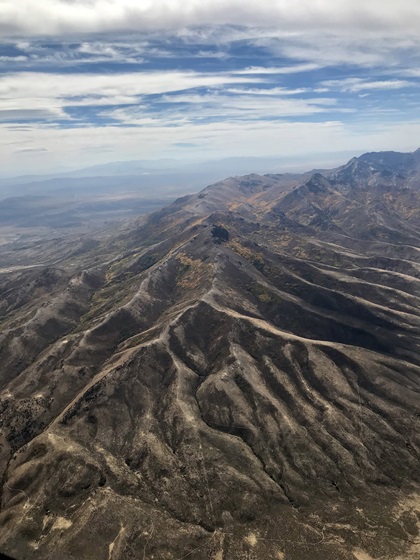 The airplane claims a service ceiling of 15,000 feet at max gross weight, and I believe it. The relatively light A5 I was flying still had enough excess power to climb 400 fpm at 11,500 feet (with a density altitude of more than 12,500 feet).

The airplane’s control feel was light and well balanced, although naturally, not as crisp as it is near sea level.

Visibility in the A5 is outstanding, and passing just north of Lake Tahoe provided some sublime views.

Also, the A5 has a very effective heater, which kept the cabin comfortable in shirtsleeves despite an outside temperature of 35 degrees Fahrenheit.

The A5 doesn’t have a digital engine monitor, just analog instruments and a fuel gauge, the accuracy of which I began to seriously question after three hours aloft when it indicated the airplane still had a shade under a half tank of fuel. It seemed impossible that a flight that started with just 20 gallons could still have 10 of those gallons after being airborne so long at cruise.

I landed after 3.5 hours aloft and took on just 11 gallons. The gauge was accurate.

The next leg was a bumpy, 3.5-hour, high-altitude, mountain-wave affair that had the A5 riding thermals as high as 13,500 feet over Salt Lake City and beyond to Rock Springs, Wyoming, for fuel. Final approach had typically gusty afternoon winds for the region (12 knots out of the northwest gusting to 22 knots). The wind was mercifully aligned with Runway 27, but gusts are problematic in an airplane where the stall speed and normal approach speed are only 10 knots apart.

The landing was uneventful, but taxiing in a strong crosswind with the A5’s free castering nosewheel requires riding the downwind brake. Fortunately, the ramp distance was relatively short, and the brake didn’t get too hot. 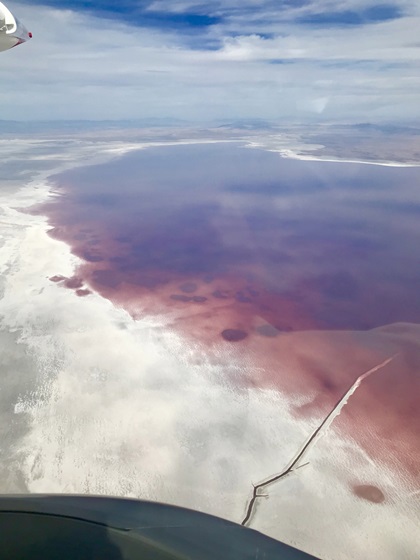 Density altitude on departure was more than 8,000 feet, but the A5 was comfortably airborne after a wind-assisted 600-foot ground roll, and climbing at a respectable 500 fpm.

The rough ride finally smoothed out over desolate eastern Wyoming (although the massive propellers at the wind farms below were spinning like pinwheels).

The day ended with a golden sunset over the plains of western Nebraska reminiscent of the similar-colored rays I’d seen that morning over California—but this time they were behind me.

I thought the hard part of the trip was over when I reached the Great Plains, but the weather had other ideas. Low ceilings and rain persisted across much of the Midwest, but the Rotax engine’s fuel consumption at relatively low altitudes remained in the neighborhood of 4 gallons an hour (at economy cruise: 4,800 engine rpm and 75 KIAS).

My impressions of the A5 after one marathon cross-country:

It’s a brilliant design with a visceral appeal that fascinates pilots and nonpilots alike. If you’re planning a trip in one, build in an extra 30 minutes at each fuel stop to answer questions from the curious (and how could anyone avoid being curious the first time they see an A5?).

The fit and finish is superb. Icon takes attention to detail to new levels, and everything worked properly on a complicated airplane with a large number of close-tolerance parts.

The angle-of-attack indicator that’s front and center in the panel is so smart and so useful, it ought to be in every airplane. It allows pilots to optimize climbs and descents regardless of aircraft weight or density altitude. Oh yeah, and you can avoid stalls, too. Icon ought to sell its AOA indicators to anyone who wants one. By the end of the trip, AOA had proven itself far more relevant than airspeed could ever be, and the ASI was an afterthought. 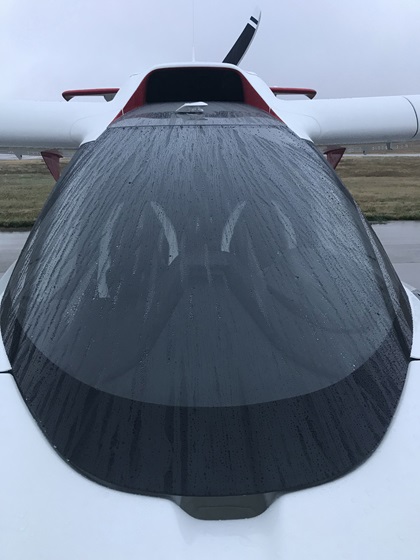 Fuel efficiency and endurance are superlative, and whoever designed Icon seats deserves a Nobel prize. They’re that comfortable.

That said, the A5 is slow, even by light sport aircraft standards. That’s the aerodynamic penalty the A5 pays for its built-in spin resistance—and Icon officials insist they’ve made a smart trade.

Full-fuel payload is extremely limited. It would have been nice to share this incredible journey with another pilot—but the A5’s limitations don’t allow for two FAA-sized adults, full fuel, and baggage. You can have two of those three things, but you’ve got to leave something (or someone) behind. On my first long-distance, high-altitude journey over some remote regions, I decided to bring as much fuel as the airplane could carry, and that meant flying solo.

The A5 cabin is noisy since the top-mounted, rear-facing engine and prop are so close to the occupants’ ears. But if you fly with the side windows out, you may be better off with passive headsets than the ANR variety. My ANR headset did well with the windows on, but it couldn’t keep up with rapid pressure changes that take place when the side windows are off.

A few final thoughts: Icon’s training program is top notch, and it emphasizes the hazards of the low-altitude environment in which A5s are built to operate. The company has taken some hard hits from two high-profile fatal accidents. But the factory training program, and the trainers themselves, are among the best in aviation. 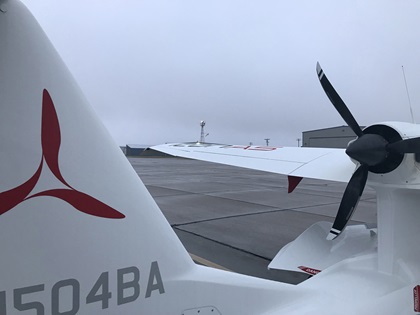 Icon gets harsh criticism in the aviation community for its testosterone-heavy, action-packed marketing videos. Some observers say the low-altitude formation flying and aggressive maneuvering promote risky flying. Personally, I don’t buy it. I watch the X-Games, but there’s zero chance that I’ll attempt a backflip on a snowmobile or a Superman jump on a motorcycle because of it.

Icon’s California factory is buzzing with activity. There were nine airplanes being assembled on the factory floor when I was there, and employees are working overtime to deliver them. When I showed up at Vacaville at 6:30 a.m. on a Saturday morning, the place was a beehive. Company officials say the Icon parts facility in Tijuana, Mexico, is running three shifts to produce the airplane’s carbon-fiber components.

There are many legitimate questions about whether a company that has spent so much over such a long period of time bringing its product to market can survive given what I assume is a heavy debt burden. We’ll see, too, whether there are enough customers out there to justify high-rate production of a totally discretionary fun machine such as the A5 at its current price of $380,000. That’s more than twice the company’s original estimate.

But there’s no doubt whatsoever that the A5 is a fabulous airplane with unique appeal. And finally, after many false starts, Icon is starting to deliver them in significant numbers. The airplane I flew was number 43.

Icon doesn’t talk about future airplanes, or potential modifications to the A5. There are lots of muscle cars and performance motorcycles in the Icon parking lot, however, and I’m sure their owners are acutely aware of the turbocharged Rotax 915 engine that puts out 135 horsepower. The A5 would benefit from it. And if they did away with the landing gear and produced a pure seaplane with a 915, it would be a phenomenon. I can dream, anyway.

The aviation world is a better, more vibrant place with the A5 in it. These exciting, fascinating aircraft belong everywhere there are pilots, runways, and waterways—and that’s a lot of places. 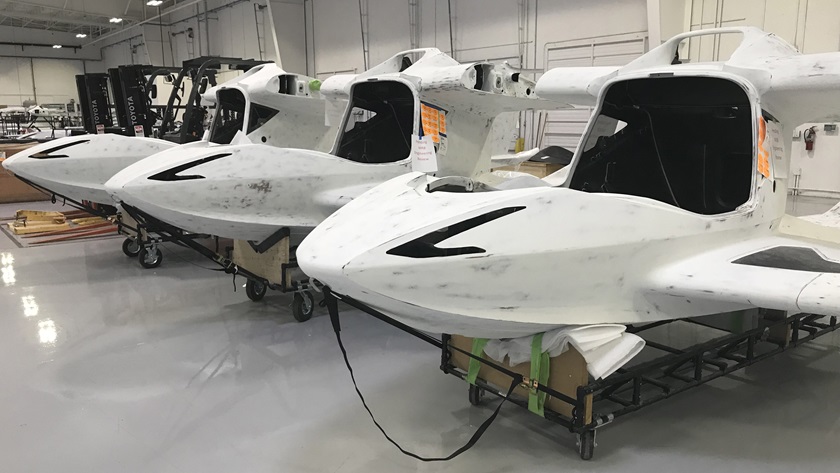