Get the app Get the app
AOPA Members DO more LEARN more SAVE more - Get MORE out of being a pilot - CLICK HERE
News & Media Top schools, instructors earn 2018 Flight Experience awards

A New York flight training business that is known for innovation and a suburban Chicago flight instructor who has gone out of his way to welcome newcomers have been voted the top winners of AOPA’s 2018 Flight Training Experience Awards. 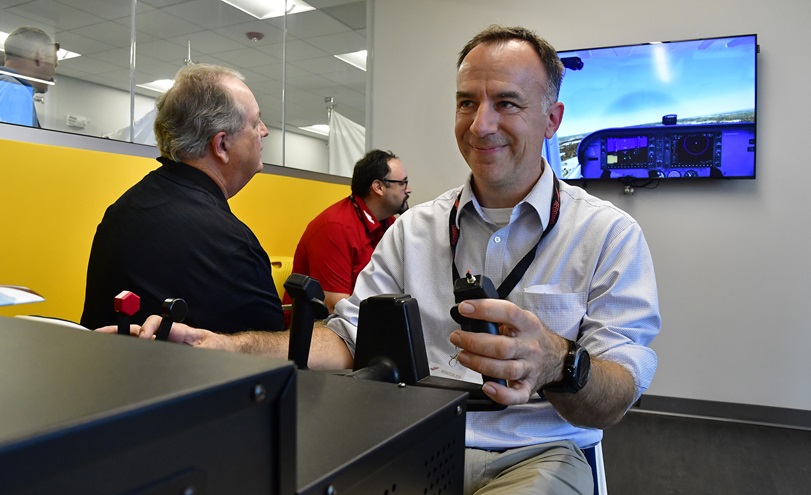 AOPA 2018 Flight Training Experience Award-winning best CFI Mike Biewenga of Blue Skies Flying Service near Chicago, tries his hand at 'blind flying' a Redbird Jay flight simulator with coaching from his team during Redbird Migration at the AOPA You Can Fly Learning Center campus in Frederick, Maryland, Oct. 10, 2018. Photo by David Tulis.
Take Flight Aviation of Orange County Airport, and Blue Skies Flying Services flight instructor Mike Biewenga from The Lake in the Hills Airport, were honored Oct. 10 at the Redbird Migration Flight Training Conference held at the AOPA You Can Fly Academy in Frederick, Maryland.

Take Flight’s trophy shelf is getting crowded. The Montgomery, New York-based training center was honored twice previously—in 2017 as AOPA Best Flight School in the Northeast, and in 2016 as a President’s Choice winner. Co-founders Ryan Mayo and Chris Graessle teach New York City students to fly from the nontowered general aviation airfield a short drive from the big city. They use newer Diamond aircraft and counted “culture, organization, and updating the fleet” as keys to their success. Mayo previously told AOPA that Diamond’s pilot-friendly lineup made it easier for pilots to “see themselves picking a travel destination and embracing GA to get there.” 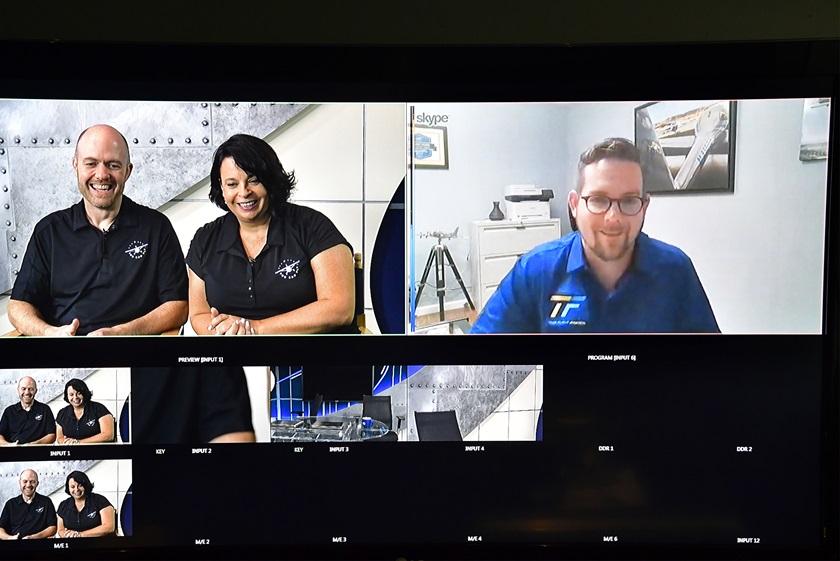 A temporarily flustered Mayo said he was “very excited” and thanked them for the award. “That’s wonderful, that’s really great news.” He explained Take Flight’s philosophy to Tennyson and Moser. “We try to make it comfortable for the students. We want them to be relaxed and enjoy the learning process. We make sure the clients are enjoying themselves and we’re always trying to push forward.”

Gold Seal Flight Instructor Biewenga learned to fly in 1993. The former airport engineer said he realized “flying was a lot more fun” than engineering and made the switch to a cockpit.

He only began teaching about five years ago and said aviation essentially “sells itself” to new students. He added that sharing his passion of flight was challenging but rewarding and noted that “each student is different.” Some might take more—or less—coaching during training from the nontowered Lake in the Hills Airport, west of Chicago O’Hare.

Blue Skies prides itself on keeping aviation fun while teaching students in some of the busiest airspace in the United States. Biewenga’s flight school is also a repeat winner, having garnered the honor in 2017 as AOPA Best Flight School in the Midwest.

Students complimented Biewenga's dedication, professionalism, knowledge, preparation, and "uncompromising high standards." They added that he was a "consummate professional pilot" with an "unbelievable work ethic."

Biewenga said one of his secrets was to consider students as people that he “genuinely cares about.” He doesn’t view them as a logbook entry or a paycheck. “My students end up being my friends because we all have a connection in one way or another.”

The 2018 Flight Training Experience Survey received 6,310 complete responses. From that feedback, 954 flight schools and 1,849 flight instructors were reviewed by their customers. Awards were chosen for standout schools and for instructors with at least five independent reviews and consistently superior ratings. Customers highlighted educational quality, customer service, information sharing, and community among the 78 distinguished flight schools and 123 distinguished instructors. A "blind committee" of industry experts awarded the top-scoring flight school and instructor in each of five regions—West, Southwest, Midwest, Southeast, and Northeast. A sixth award was presented to the overall national award winner.

AOPA Senior Vice President of Media, Communications, and Outreach Tom Haines gave a keynote presentation prior to the award session during the annual Redbird Migration, a two-day learning seminar with breakout sessions, special challenges, and other events that enlightened, invigorated, and recharged flight training industry professionals. Attendees were also treated to a spirited talk by Red Bull Air Race pilot Michael Goulian, who encouraged them to keep a positive attitude, instill confidence in students, and provide a teamwork approach to flight training that would be “the hook” for an aviation lifestyle. 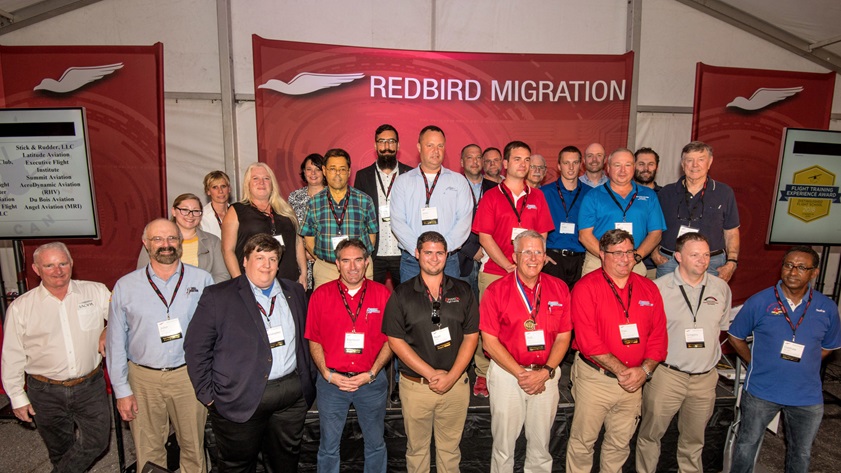 Senior Photographer
Senior Photographer David Tulis joined AOPA in 2015 and is a private pilot with single-engine land and sea ratings and a tailwheel endorsement. He is also a certificated remote pilot and co-host of the award-wining AOPA Hangar Talk podcast. David enjoys vintage aircraft ad photography.
Go to David Tulis's Profile
Topics: You Can Fly, Training and Safety, Flight Instructor