Get the app Get the app
AOPA Members DO more LEARN more SAVE more - Get MORE out of being a pilot - CLICK HERE
News & Media Slow, steady growth in business jet market

While there are economic and political instabilities and questions around the globe, none of the uncertainties so far have negatively impacted companies’ decisions to buy business jets, according to the latest Global Business Aviation Outlook from Honeywell Business Aviation. After 27 years, the forecast has become a tradition for the kickoff of the National Business Aviation Association's annual convention, this year being held in Orlando Oct. 16 through 18. 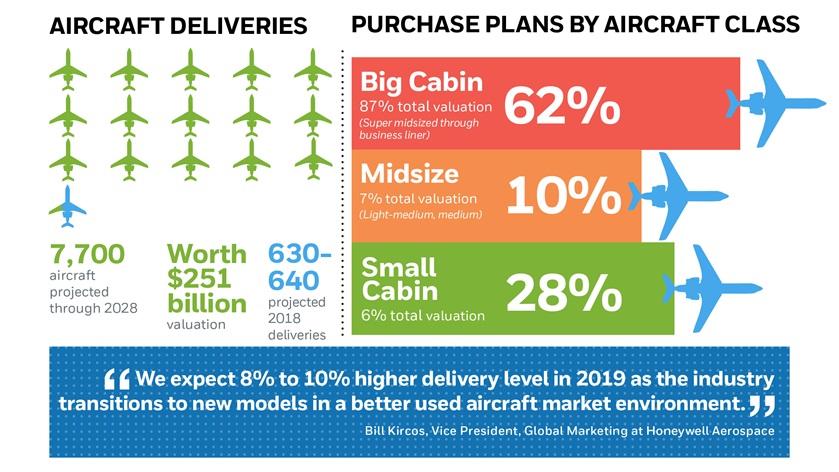 Stability is the word, according to Honeywell officials. The 2019 10-year forecast suggests one percent higher growth than last year’s forecast, thanks mostly to strength in Europe.

All in all, the forecast suggests a need for some 7,700 business jets during the period, up about 50 units from the previous forecast. North America, traditionally the largest market, maintains that position with 61 percent of projected sales. Next highest is Europe at 16 percent. Latin America is third at 12 percent, but only after a forecast drop of some 7 points compared to last year. Forecasts for Mexico are down significantly. Higher than expected growth in Brazil made up for some of the decline in Mexico.

A one- to two-percent increase in billing to $251 billion may in part be because a larger percentage of companies than ever are considering super-midsize and large cabin airplanes, according to Gaetan Handfield, Honeywell’s senior manager of marketing analysis. Some 62 percent of survey respondents said they were considering aircraft in those categories, while 10 percent are planning on midsize aircraft and 28 percent small cabin business jets.

While the growth over the forecast period is strong, 2019 in particular will be a good year compared to 2018. “A better used-aircraft market environment coupled with the entry into service of many new business jet platforms will lead to higher deliveries in 2019 after a virtually flat year in 2018,” said Bill Kircos, vice president of global marketing at Honeywell Aerospace. “We are excited about the used market and about new and innovative aircraft models that will not only drive solid growth in 2019 and 2020, but also have a significant impact on new business jet purchases in the midterm and long term.”

Handfield concurred, noting that values of light business jets in particular have firmed up over the past year as inventories of recent model aircraft have declined. The total number of recent model jets (less than 10 years old) listed for resale is down 30 percent year over year and is now just slightly higher than 5 percent of the installed base—well below the historical average of about 8 percent. And while that’s a good indicator for future sales, it is still higher than traditional norms. In proportion to the level of overall listings, the share of recent model jets for sale is still more than 20 percent of total listings in comparison with pre-recession levels of 15 to 20 percent.

In addition to economic data analysis, Honeywell draws its conclusions from interviews with more than 1,500 nonfractional business jet operators around the world.