Opinion: Hip to be (over)square

The myriad benefits of high manifold pressure and low rpm

I bought my first airplane at age 24 shortly after I relocated from New York to California. It was a brand-new 1968 Cessna 182 Skylane that I picked up at the Cessna delivery center in Wichita. In preparation for that momentous event—and to make my insurance underwriter happy—I got a thorough checkout in a flight school Skylane with a very senior CFI. 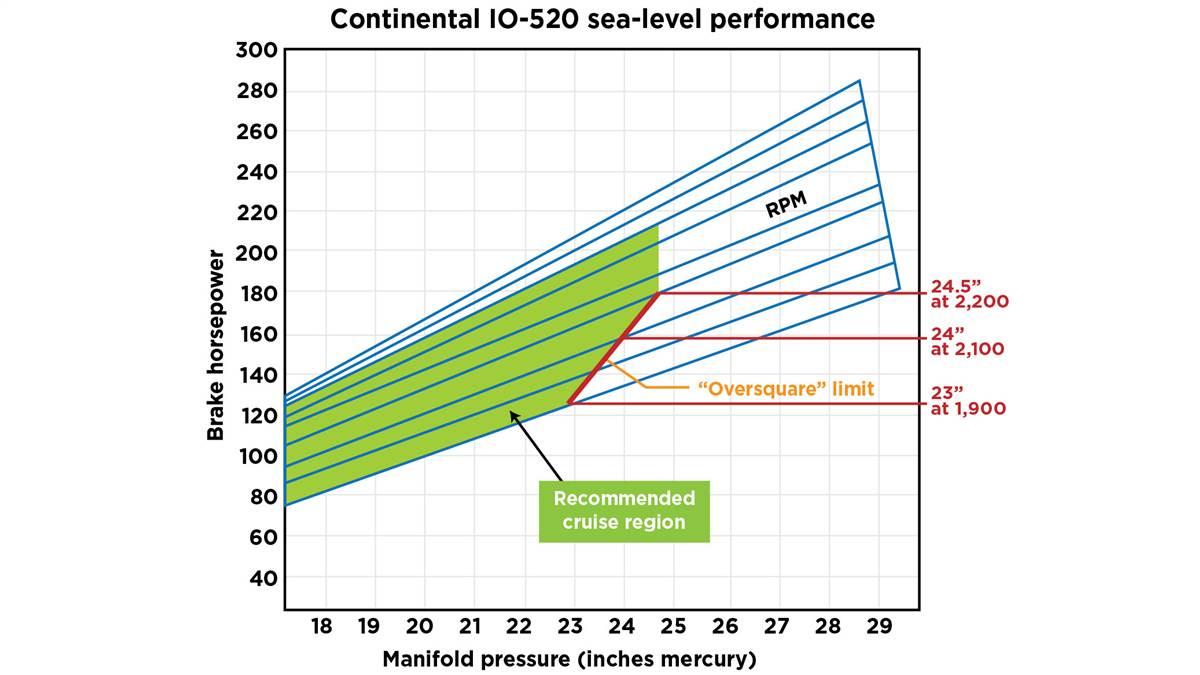 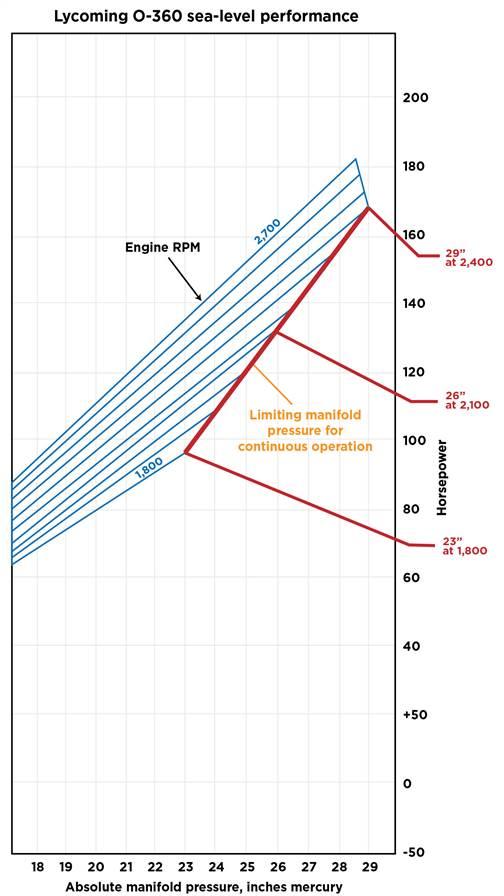 All my time up to that point had been in Cessna 150s and 172s and Piper Cherokee 140s—all airplanes with fixed-pitch props and primitive engine instrumentation. Knowing this, my instructor placed a lot of emphasis on teaching me how to use the Skylane’s constant-speed propeller, and how to manage the powerplant using manifold pressure (MAP) and rpm and exhaust gas temperature.

One thing the instructor stressed repeatedly was the importance of never operating the engine oversquare—that is, with manifold pressure greater than rpm divided by 100. Under his persuasive tutelage, I was taught that a “square” power setting of 25 inches and 2,500 rpm was acceptable, an undersquare one of 23 inches and 2,500 rpm was even kinder to the engine, and an oversquare setting of 25 inches and 2,300 rpm would most likely blow the heads right off the cylinders and had to be avoided at all costs.

To avoid going oversquare for even a moment, the instructor taught me that a power reduction—such as going from takeoff power to climb power, or from climb to cruise—must always be done by first pulling back the throttle to the desired lower manifold pressure, and only then pulling back the propeller control to the desired lower rpm (but never less than manifold pressure times 100). Conversely, a power increase must be made by first increasing rpm and then increasing manifold pressure (but never more than rpm divided by 100).

To lean, the CFI taught me to slowly lean the engine to peak EGT, then enrich until the EGT dropped by 125 degrees Fahrenheit to establish best-power mixture. The Skylane’s Continental O-470 engine would start getting noticeably rough at peak EGT, so lean-of-peak operation was never even discussed.

Four years later, after putting nearly 1,000 hours on my Skylane, I traded my Skylane for a high-performance retractable—a brand-new 1973 model Bellanca Super Viking. My new airplane was powered by a 300-horsepower Continental IO-520.

Virtually all turbocharged engines operate very far over square, using precisely the same cylinders and metallurgy used by their normally aspirated brethren.At first, I flew the Viking the same way my CFI had taught me to fly the Skylane: never oversquare, never lean of peak. Then I got involved with a public-benefit flying organization called The Flying Samaritans, and began flying teams of doctors, dentists, and nurses to free medical clinics in remote areas of Mexico. The clinic locations were often at dirt airstrips with no fuel or services, so we had to carry enough fuel to get there and back without refueling.

I happened across an article describing how during World War II, Charles Lindbergh visited the South Pacific and taught fighter and bomber pilots how to achieve much greater range through optimal powerplant management—mostly oversquare operations and lean mixtures. For example, the P–38 was considered to have an operational range of just 400 miles, but Lindbergh taught the P–38 pilots how to stretch the range to 950 miles by operating them oversquare and leaning them brutally. Some pilots were reluctant to follow Lindy’s guidance at first, afraid that they’d damage the engines, but ultimately the guidance became standard operating procedure for the aircrews.

I tried to find out what Bellanca and Continental had to say about oversquare operation. The Viking pilot’s operating handbook proved unhelpful, but then I discovered that Continental published an IO-520 operator’s manual full of charts and tables. One of those charts, titled “IO-520 Sea Level Performance,” was especially enlightening. It depicted a shaded envelope labeled “recommended cruise region” that depicted all the recommended manifold pressure and rpm combinations. The lower-right boundary of that envelope showed how far oversquare the engine could be run without exceeding Continental’s recommendations for continuous operation.

This isn’t limited to Continentals. In fact, Lycoming is even more liberal in allowing oversquare operation. The Lycoming operator’s manual for the O-360, for example, shows an envelope for recommended continuous operation that includes settings such as 23 inches at 1,800 rpm, 26 inches at 2,100 rpm, and 29 inches at 2,400 rpm—all five inches oversquare, and all with Lycoming’s blessing.

In 1987, I bought my third airplane, a 1979 Cessna Turbo 310. This was my first turbocharged airplane (and my first twin), and it took awhile to get comfortable with the power settings recommended in the POH. I found myself cruising at 29 inches of manifold pressure and 2,100 rpm, a whopping eight inches oversquare. In fact, it quickly became clear that virtually all turbocharged engines operate very far oversquare, using precisely the same cylinders and metallurgy used by their normally aspirated brethren.

Operating oversquare—using higher manifold pressure and lower rpm—brings many benefits, some obvious and some not so much. Perhaps the benefit that’s most immediately obvious is that there’s less noise when operating at low rpm. Lower propeller tip speed generates less intense sonic shock waves. The lower frequency of the engine noise is more pleasant, less noticeable, and more easily suppressed by active noise reduction headsets.

Lower rpm also reduce frictional losses in the engine. These losses increase faster than linearly as rpm increases. Propeller efficiency is also better at lower rpm, which is why turboprops have reduction gearboxes that turn the propellers quite slowly.

An engine “breathes better” at low rpm and high manifold pressure—what engineers refer to as volumetric efficiency. A slow-turning engine has much-reduced pumping losses, and a wide-open throttle (or as close as possible) greatly reduces the work the engine must do to suck air into the cylinders.

Less obvious but very important is the fact that a slow-turning engine provides more time for the combustion events to play out and convert chemical energy from the fuel into mechanical energy that drives the propeller. Low rpm increases the time interval between the spark plug firing and when the exhaust valve starts to open. The result is that more energy reaches the propeller and less gets “thrown out the back door”—something you can see clearly in the form of reduced EGT during low-rpm operation.

This last point explains why operating oversquare is vital when operating an engine lean of peak. A lean mixture results in a slower combustion event that takes more time to complete; the leaner the mixture, the more time it takes. To accommodate this slower combustion, the engine needs more time from ignition to exhaust valve opening. Modern full authority digital engine control (FADEC) systems provide this additional time by advancing the ignition timing during lean-of-peak cruise. Unfortunately, most of us fly non-FADEC engines equipped with old-fashioned fixed-timed magnetos, so for us the only way to provide the additional time is by reducing rpm.

Many pilots who cruise lean of peak don’t understand this. I remember one client who bought a new Cirrus SR22 and was experiencing engine roughness and popping sounds that he described as “backfiring” that were so bad that his wife refused to fly in the airplane. He complained about this to his shop, which called Continental Motors for help (since the airplane was still under warranty). Over a period of months, Continental sent the shop a new fuel pump, a new fuel control unit, and a new manifold valve, but none of these had any effect on the issue. Finally, in sheer desperation, the owner contacted me for help.

When the owner uploaded his engine monitor data to the SavvyAnalysis.com platform, the problem was immediately obvious: The Cirrus was cruising lean of peak at 2,700 rpm. I suggested to the owner that he try reducing to 2,500 rpm or less (preferably less) before attempting to operate lean of peak. He did that, and all his rough running and popping miraculously disappeared.

I’m not sure that the Cirrus owner or his mechanic ever fully understood why reducing rpm resolved the problem. But Lindy would have.AOPA