Get the app Get the app
AOPA Members DO more LEARN more SAVE more - Get MORE out of being a pilot - CLICK HERE
News & Media System rundown: King Air fuel systems

Where pumps and gravity rule

The King Air serieS of turboprop twins has been a success since the first straight-90 models came out in 1964. In its 54-year history, there have been several variants of the design, but most of them share the same basic fuel system design philosophy. Let’s go through a quick overview of the King Air B200’s fuel system as an example. 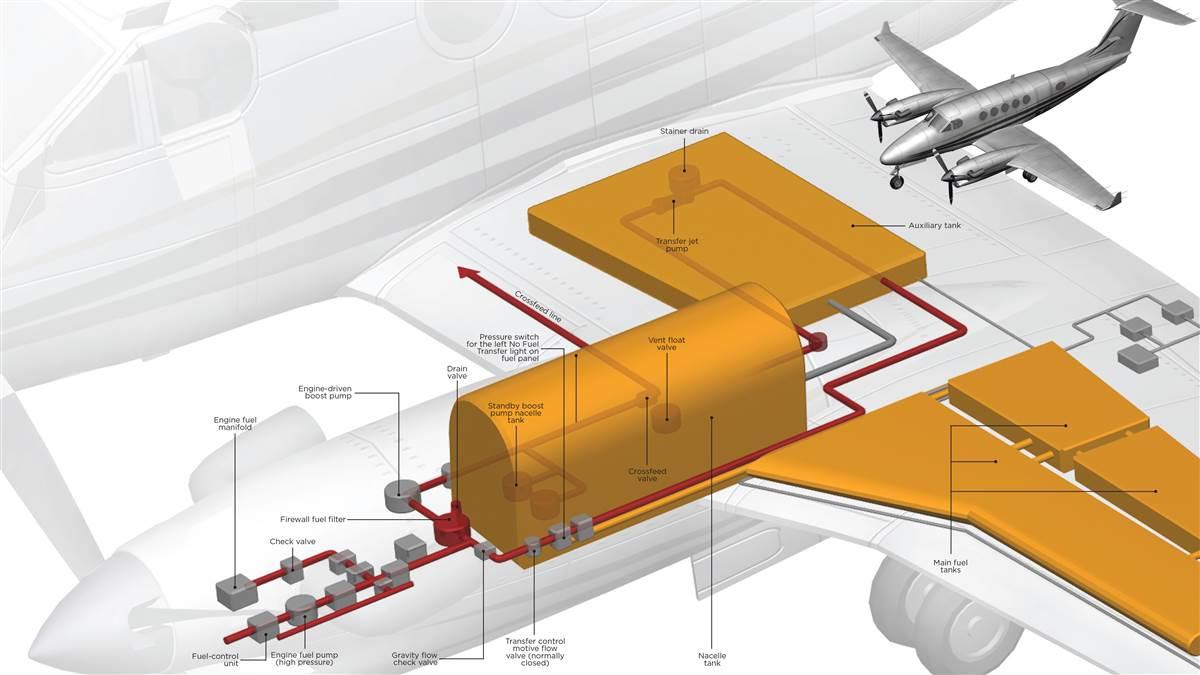 The fuel tank arrangement is nothing special. Each wing has a main tank setup, which is really a combination of five interconnected compartments that can hold 386 gallons. There’s also a single, 79-gallon, rubber-bladder auxiliary (aux) tank that’s located inboard of the engine nacelles. Another 57-gallon tank is located in the engine nacelle.

You can’t use crossfeed to even out any fuel imbalances between wings. The system is only fitted with fuel lines to feed the opposite engine’s nacelle tank—not its main or auxiliary tanks.A failure of this auxiliary fuel transfer system could cause fuel starvation. That’s why there are amber No Transfer warning lights on the fuel control panel. Now’s the time to move the fuel control panel’s Aux Transfer switch from the normal, Auto position to the Override position. This bypasses the automatic transfer feature, opens a motive flow pump in the nacelle plumbing, and resumes fuel flow to the nacelle tank.

Of course, the No Transfer light will also come on should an aux tank somehow run dry. But before that happens, sensors and float gauges in the aux tank would have signaled the main tank to take over by gravity-feeding directly to the nacelle tank.

What if an engine-driven fuel pump quits? You’ll know because a red Fuel Press glareshield annunciator will come on. Turn the Standby Pump toggle switch to the On position and a pump—this one located within the nacelle tank—will supply enough fuel flow to keep an engine running.

The nacelle’s standby pump is also used in crossfeed operations. But crossfeed is designed for engine-out operations only. To send fuel to the operating engine, turn its Auto Transfer switch to Auto, then select the engine to be cross-fed using the fuel panel’s Crossfeed Flow toggle switch. This turns on both the inoperative engine’s nacelle standby pump and the green Fuel Crossfeed light on the annunciator panel.

Here’s the puzzling thing. You can’t use crossfeed to even out any fuel imbalances between wings. The system is only fitted with fuel lines to feed the opposite engine’s nacelle tank—not its main or auxiliary tanks. An oversight? Perhaps; turning Crossfeed Flow to Off may help in balancing a heavy wing on the operating-engine side, but there’s no mention of this in Beech manuals. Or maybe that’s why there’s such a whopping, 1,000-pound (150-gallon) maximum allowable fuel imbalance limitation.

The King Air’s fuel system can seem archaic to the unfamiliar. Even so, it’s pilot-friendly. For one, it operates automatically, so pilot intervention is seldom necessary. You could fly along for hours, days, months, or even years without having to do anything but monitor the fuel gauges.