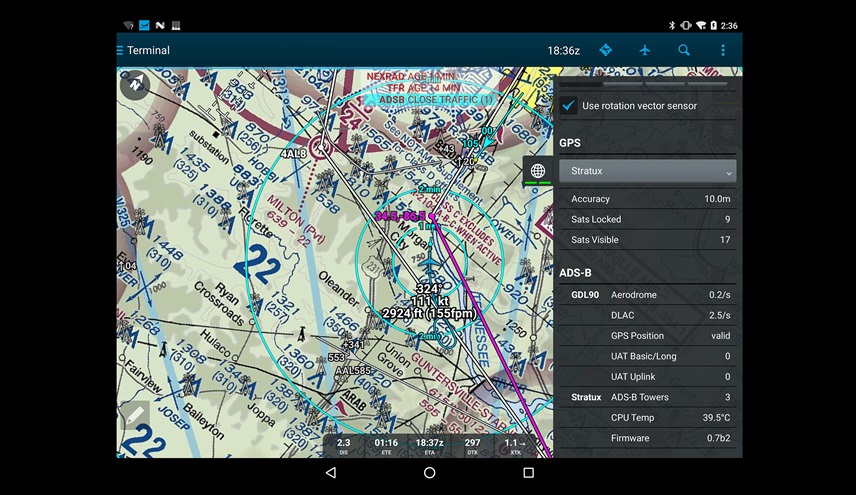 Android smartphone users Paul Coleman, Jacek Duda, and Mark Spencer are the brains behind the DroidEFB app. They felt stymied when other electronic flight bag apps focused efforts on Apple’s iOS devices but not on the Google-based system, so they battled back.

“The biggest thing the partners have in common is that we’re all pilots and we met because we’re Android users not Apple users,” Coleman said. “We initially made the app for ourselves and for the longest time it was a side project, but now we’re meeting the challenge to compete in the marketplace.”

The team wanted to create an interface that was “pilot focused and responsive” for the “thousands of pilots across the U.S. who are using the Android platform,” said Coleman.

Users can select a 30-day free trial, and subscription options begin at $6.99 per month and $74.99 per year for the standard plan.

“We also have premium subscription for $149.99 per year which includes georeferenced approach plates and airport taxi diagrams,” explained Coleman. He pointed out that standard-plan users can still access the approach plate and taxi diagram data, but the premium version allows them to track their progress across the plates in real time. The structure is similar to other data subscription plans in the EFB marketplace.

“We integrate our functions with the Flight Planner in the same manner as competitors,” explained Coleman. “Once you’ve created a flight plan you can send it to yourself and then click on the email to open it up. The link automatically opens in DroidEFB and loads the flight plan into the app. It allows the user to compile a flight plan on a computer and then send it to their mobile phone and really cuts down a lot of steps.”

DroidEFB runs on a phone or a tablet, said Coleman, who pointed out that some users leave their tablet in their aircraft or at home and compile flight plans at work. “It saves time, and it’s more convenient, plus it harnesses all the power of a desktop interface.”

Coleman said he sees the competition as the iOS system rather than other apps on the Android platform. “A lot of people use an Android phone and an iOS tablet, so we want to let folks know that there is a solution for us Android folks.”