Get the app Get the app
Already a member? Please login below for an enhanced experience. Not a member? Join today
News & Media How It Works: Marking time

How It Works: Marking time

What is a student pilot’s worst nightmare—engine failure in flight? An encounter with unseen wake turbulence? An unexpected thunderstorm? 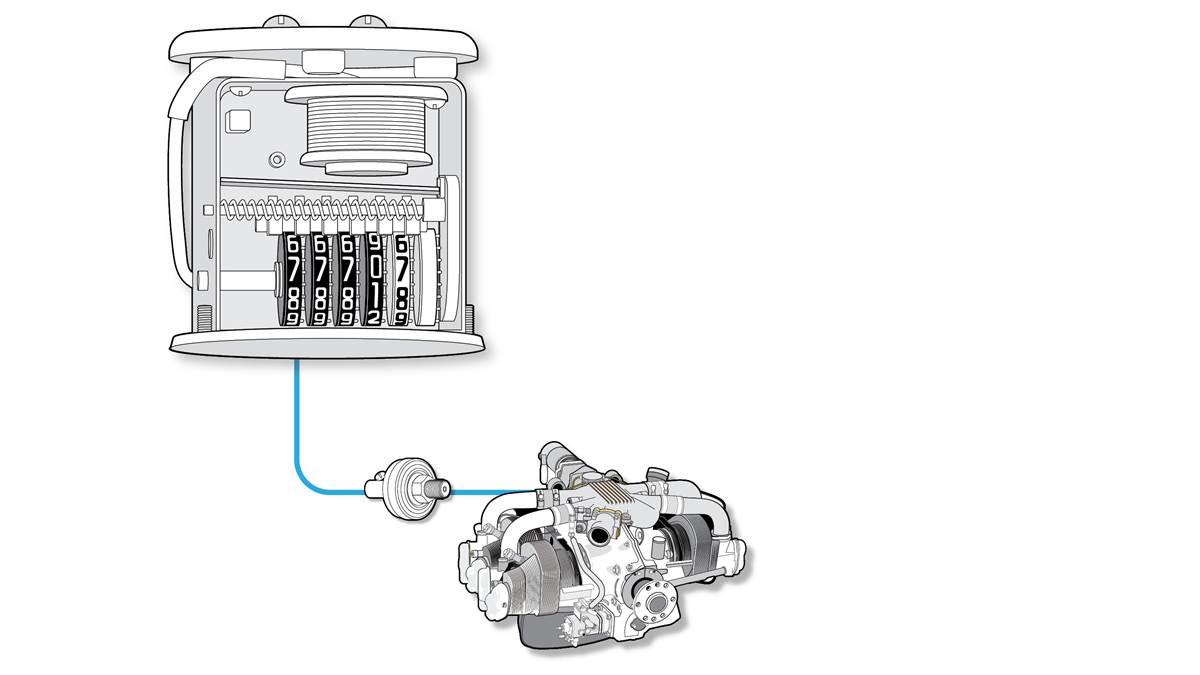 In this installation, an oil pressure switch (shown at center) senses when the engine is running, and sends an electrical impulse to the hour meter. Inside the meter, a solenoid (top) activates the mechanism that marks the time. The white dial on the right records each one-tenth of an hour; gearing automatically causes the hour, 10-hour, 100-hour, and 1,000-hour dials to advance at the proper intervals.
Illustration by Steve Karp

No, the joke goes, it’s a runaway Hobbs meter. That small hour meter measures the amount of time that an aircraft is in operation, and aircraft rental charges usually are billed on the Hobbs reading.

Think of the Hobbs meter as a clock. Honeywell, which now owns the Hobbs brand, offers this definition: “An hour meter is a gauge or instrument that tracks and records elapsed time, normally displayed in hours and tenths of hours.”

A Hobbs meter can measure different things. Most are activated by a pressure switch connected to the oil system, and the meter runs when the engine is operating. A meter can measure the time that the electrical system is on—think master switch. Hobbs meters also can be activated by an airspeed switch, or a squat switch attached to retractable landing gear—here, it would measure only the time the aircraft actually is airborne.

The aircraft’s tachometer behaves similarly to the Hobbs meter, but there’s a significant difference. Tachometer (tach) time counts engine rpm, and likely provides a better indication of wear and tear on the engine. On a typical training flight with a lot of slow flight or pattern work, the tach time will be lower because the engine hasn’t turned as many revolutions. Tach time typically is 10 percent to 20 percent lower than Hobbs time, depending on the length of the flight and the power setting(s) used.

Most flight schools use the Hobbs meter to bill aircraft rental fees and the tachometer for engine service intervals, so don’t be surprised if you’re asked to log both at the end of a flight.

Why not just use tach time for everything? FAR 1.1 defines flight time as “Pilot time that commences when an aircraft moves under its own power for the purpose of flight and ends when the aircraft comes to rest after landing.” An oil pressure switch-activated Hobbs meter most closely approximates this. (And if the rental cost was based on the tach instead of the Hobbs meter, you would find the hourly rate to be at least 10 percent higher.)

Hobbs meters are not just an aviation thing. Their use is common on off-road vehicles, as well as vehicles that experience high running or idling time, with comparatively lower actual mileage.