Get the app Get the app
Get the latest news on coronavirus impacts on general aviation, including what AOPA is doing to protect GA, event cancellations, advice for pilots to protect themselves, and more. Read More
Already a member? Please login below for an enhanced experience. Not a member? Join today
News & Videos Making graceful landings

When do you think a good landing begins? Roundout and flare? Nope. It begins while still in the traffic pattern. 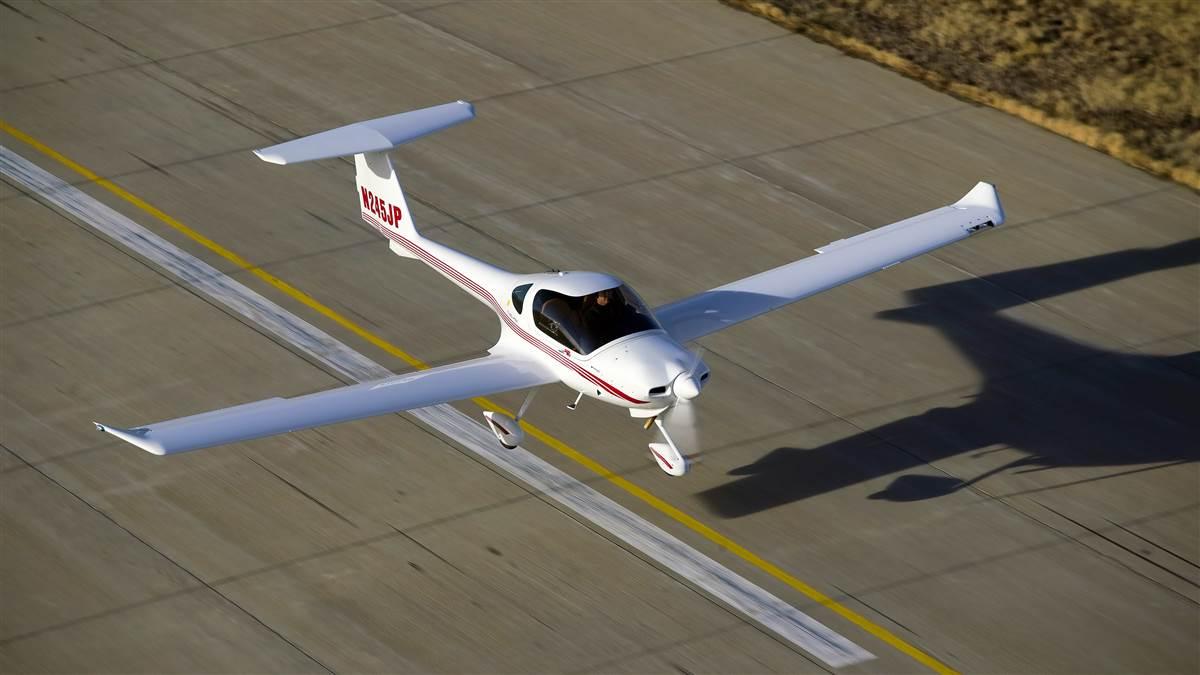 Holding the proper speed for each leg of the traffic pattern will set you up for success when it comes time to pitch up for the flare and gracefully set the airplane down on the runway. And you can build many of the skills you need for a perfect landing—from airspeed control to finessing the flare—in the practice area, far from the pressures of a busy pattern. Here are some tips to help you become the envy of the airport.

Downwind legs should have a speed limit sign like the ones you exceed when driving (c’mon, you know you do). If you don’t want to float just above the runway too long because of excessive speed, don’t scream down the downwind leg. Use the speeds suggested by your flight instructor or the aircraft manufacturer for downwind, base, and final legs and accurately hold them.

Being too fast on final approach could lead to “floating” just above the surface too far down the runway to make a safe landing on the remaining runway. Pilots have gotten into trouble in this situation when they try to push the nose down. That results in something called a porpoise, when the nosewheel strikes the runway followed by the main gear, followed by the nose gear and continuing. If you float too far down the runway, don’t try to force a landing. A go-around is a good solution.

“No one can hold an airspeed within one or two knots,” you say? Actually, “no one” is exactly who can hold an airspeed within one or two—maybe three—knots. See for yourself. Go to the practice area and set up the speed and configuration used on downwind. Now use elevator trim to remove all forces (no forward pull, no backward pull) from the control column and take your hands off the yoke or stick. (Memorize how much trim you used.) Briefly let go of the control yoke and assure the aircraft does not try to raise or lower its nose, and now “no one” is holding the perfect speed.

Practice the same way for the base and final speeds. For the base airspeed, did it take two more turns of the trim wheel, or maybe two more seconds if you have electric trim, to remove forces from the control column? What was the power setting? Memorize those. Next time you are in the pattern, use the same power setting and trim movement as you did in the practice area. It’s like setting cruise control in a car. With your hand loosely on the control yoke, you are adding very little forward or backward pressure.

It lightens the workload if you already know the power settings and amount of trim required for each airspeed. When you descend on final, is it a reduction in power of 200 rpm? Does it take a turn and a half of additional trim for the recommended lower speed? It’s easier to learn that in the practice area than trying to tinker with the settings for various flap configurations once every five minutes as you go around the traffic pattern.

Repetition is good. Approaches should be identical every time, as opposed to coming in too high one time and too low the next. That is why Ron Fowler suggested in his book, Making Perfect Landings, to start the final approach from 400 feet above the runway every time. That way you are monitoring your altitude as you descend from the downwind leg to end up at 400 feet agl after turning final. You are therefore planning not to be too high or too low, and making any corrections early in the approach to landing. 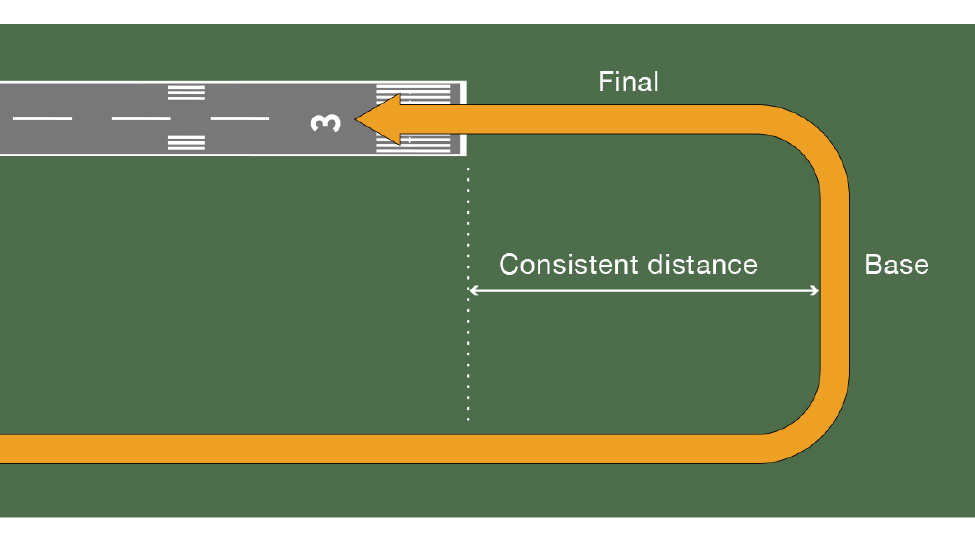 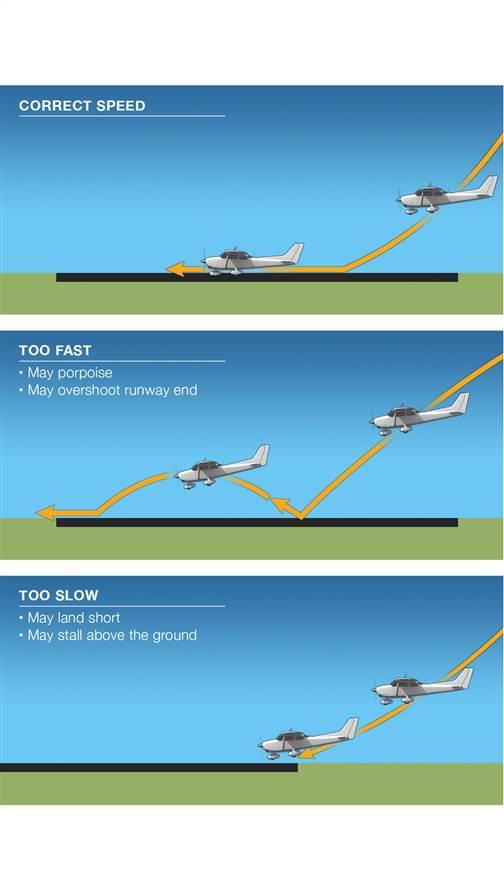 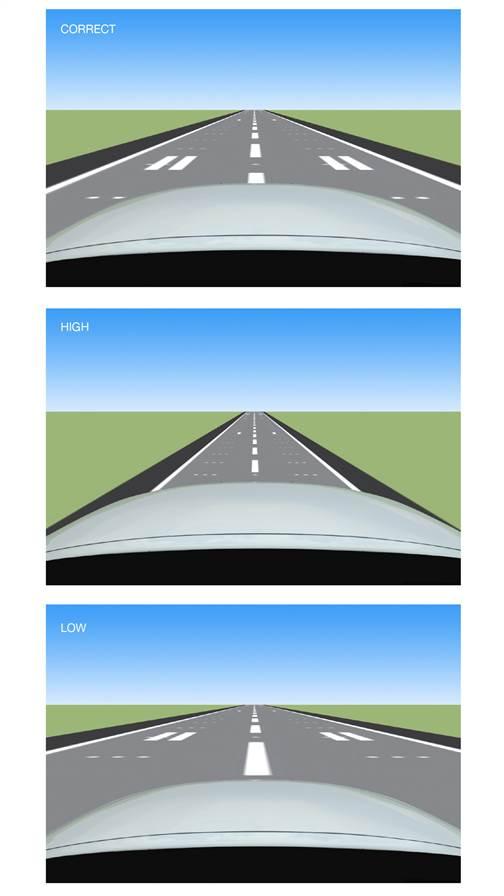 Airspeed control—Trim the aircraft in level flight to pattern speeds and power settings.

Roundout—Your instructor may have you descend to a safe target altitude and level off as you would when landing.

Level flight picture—Look at the amount of land between the cowling and the sky when on the ground to determine level attitude in flight.

Slow flight above the runway—Your instructor may have you conduct slow flight almost the entire length of the runway without landing to ensure you can level off at the proper altitude.

Just before the airplane touches down, a pilot pitches the airplane up to slow the rate of descent and airspeed for landing. The FAA uses the terms roundout and flare interchangeably to describe this fluid transition from approach attitude to landing attitude, but many instructors find it helpful to describe it in phases: The roundout is a level-off at about 10 feet above the runway to slow the rate of descent, and the flare is when the airplane’s nose rises above level to continue bleeding off airspeed and settle onto the runway.

Before touchdown, you’ll have to level off above the runway to slow your rate of descent and slow down further to land—in other words, round out or flare (see “Jargon,” p. 39). Probably the biggest challenge in learning to land is timing the roundout—that transition from final descent to holding it level above the runway to decrease airspeed. Too soon (high) and there you sit at low or no power—“hanging five” as the surfers say—15 feet above the runway with deteriorating airspeed and no way to call your mama. Without adding power—right now—or going around, you are about to “demonstrate” an aerodynamic stall followed by a heavily bounced landing. It’s back to the practice area for more tests.

In the practice area your instructor may have you descend from, say, 4,000 feet above the ground to 3,600 feet, rounding out slightly above the altitude desired, but reducing the throttle as though you were going to land. This will give you an understanding of how fast your aircraft can arrest its descent and fly level just above the runway during an actual landing.

That’s another big issue with learning to land. You see the aircraft descending to the fast-rising runway and may become a little nervous about how long it will take to transition to level flight just above the runway at idle power. When should you start? Your instructor may have you do it several times at a safe altitude until you can level off just above the target altitude. Once you know that timing, you won’t jerk back on the controls during an actual landing because you waited too long, or arrest the descent too early out of concern for hitting the runway with a high descent rate.

The roundout is much like catching a fish—keep pressure on the line or the fish will get off the hook. With an airplane, steadily increase back-pressure on the flight controls or the airplane will land on its nosewheel. The goal is to keep the aircraft in a climb attitude as the speed slows. It is like slow flight, which is one reason your instructor will have you practice slow flight. It gives you an idea of how the airplane controls react at landing speed.

Where should you look while keeping the fish on the hook? This is another area that gives students and even experienced pilots a problem. Some students are told to land on the “touchdown zone stripes,” or maybe “just where the taxiway joins the runway.” They arrive, looking down ever more steeply as the aiming point gets closer when they should have their eyes on the opposite end of the runway. Why? Looking down the runway instead of at a point close to the airplane better shows your descent rate. You’ll see the opposite end appear to rise and have a better idea of how much back-pressure to apply to the control yoke to control the rate of descent. Here’s another clue: As you enter the roundout zone, the runway will suddenly appear to become wider.

Here’s a tip for those learning to fly at towered airports. If a controller generously offers to let you land ahead of a second aircraft two miles out, the word you need is “unable.” Expediting a landing at this stage of your career is the enemy. You’ll end up trying to configure the aircraft and trim for final approach speed while flying a 180-degree turn from downwind to final approach—completing a thorough checklist—and perhaps needing to do a razzle-dazzle forward slip during final approach.

Channeling Clint Eastwood’s “Dirty Harry,” an expedited landing has you thinking, “Did I do the checklist three times or not at all? To tell you the truth, with all this excitement I kind of lost track myself. But being that I am in an airplane, which can be unforgiving, I’ve got to ask myself one question. ‘Do I feel lucky?’” 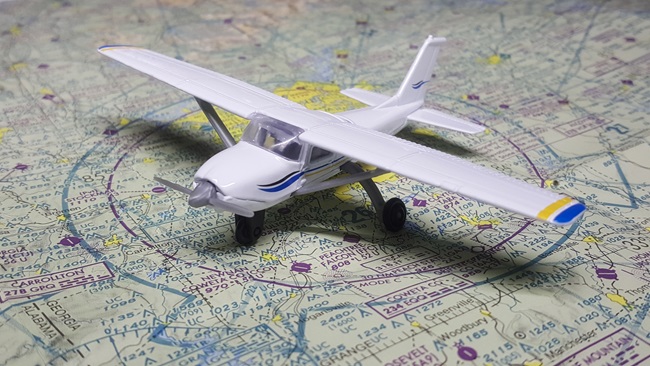 Training Tip: The seat of learning