Get the app Get the app
AOPA Members DO more LEARN more SAVE more - Get MORE out of being a pilot - CLICK HERE
News & Media Proficiency: Coming up short

During a recent mock checkride, I simulated an engine failure in the Piper Arrow by reducing the throttle to idle. Louis, a commercial pilot candidate, pulled his checklist from the side pouch and got to work. He used back-pressure on the yoke until the airspeed indicator read 75 knots while searching the Tennessee countryside for a field that would provide the safest site for an engine-out landing. 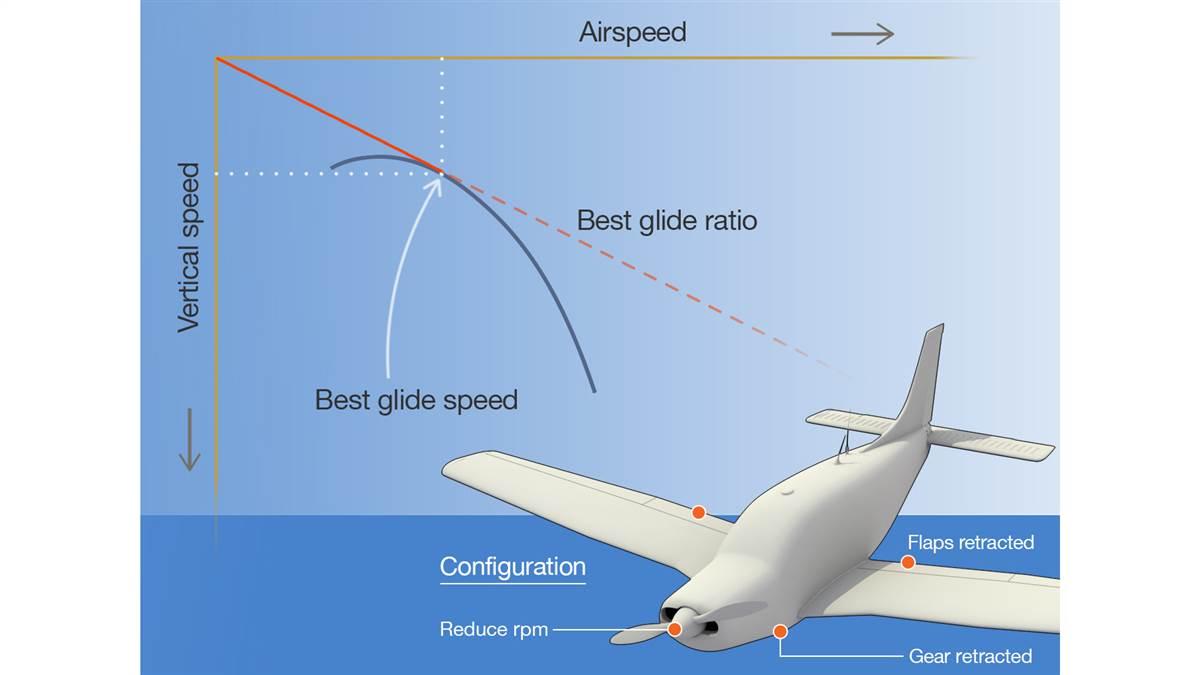 Best glide speed gives the farthest distance forward for a given altitude loss in zero wind. To achieve book numbers, however, it’s important to configure the aircraft with minimal drag, as specified in the pilot’s operating handbook.
Illustration by Charles Floyd 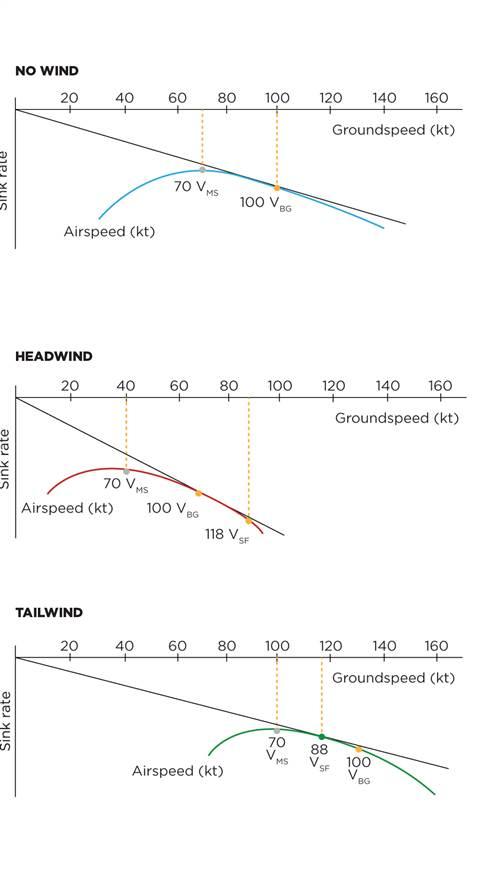 After pointing the airplane toward a relatively flat field, Louis used the elevator trim control to reduce his workload in maintaining a constant-airspeed glide. He announced and motioned through checklist procedures designed to effect a restart. Louis consulted the Piper Arrow pilot’s operating handbook (POH) and reported that at 6,000 feet above the ground, we could glide almost 10 nautical miles away. In reality, despite all checklist items properly completed, our aircraft was capable of gliding less than 6 nm. Why was his estimate so far off?

Louis wisely used the elevator trim control to minimize his workload in maintaining a constant airspeed. With his background flying gliders, he knew that a better airspeed to use in this situation is not actually best glide airspeed but one called “speed to fly.” Estimating the tailwind component to be 15 knots, he used the slower speed of 75 knots to increase glide distance. (See sidebar “Speed to Fly”.)

Minimizing aerodynamic drag is key to achieving the longest possible glide, so Louis verified that the gear and flaps were retracted and the engine cowl flaps were closed. He kept the inclinometer ball centered because uncoordinated flight increases drag.

The Piper Arrow POH claims that, at best glide airspeed and in a minimum drag configuration, the Piper Arrow can travel approximately 1.6 nm for each 1,000 feet of altitude loss in a no-wind situation. Because the simulated engine failure occurred 6,000 feet above the terrain, we should have been able to glide 8 nm away with 1,000 feet of altitude remaining to maneuver into the wind. Our airplane was incapable of gliding anywhere close to this distance, and the culprit was the propeller configuration.

Before simulating the engine failure, the propeller control was set to 2,300 rpm. When I pulled the throttle to idle, the propeller, with a relatively fine pitch, continued to rotate at a high rpm. Multiengine pilots know how devastating the drag from a windmilling propeller can be, so their airplanes are equipped with a mechanism to coarsen the pitch and stop the rotation. The decrease in drag and the attendant forward acceleration is noticeable.

During certification testing for general aviation aircraft, test pilots determine the glide polar of the aircraft—a graph that shows vertical velocity versus airspeed for a gliding aircraft. Because the airplane is descending, the vertical velocity is negative. The airspeed that gives rise to the lowest sink rate is VMS, or minimum sink airspeed. Using VMS airspeed will give the pilot the longest time aloft and is handy when planning an approach over a safe landing area. But this is not the correct airspeed to use if a favorable landing spot involves traveling to another area.

Connect a point on the graph and the origin with a line, and its slope represents the glide ratio when using that airspeed. The flatter the line, the better the glide performance, so consider the line that just barely touches the curve. This is how the best glide airspeed, VBG, published in the POH is determined and is a faster airspeed than VMS.

But glide performance really depends on groundspeed. A headwind will shift the graph to the left and a tailwind will shift it to the right. Each changes the way the line touches the glide polar. Glider pilots know best glide airspeed corrected for winds as speed to fly, or VSF. A tailwind improves glide ratio and a headwind hurts it. In either case, you can use this thumb rule for making the best of an engine-out scenario: For a headwind, increase your airspeed by about one-quarter of the headwind component and, for a tailwind, decrease your airspeed but never less than VMS. These thumb rules modify those proposed in the FAA’s Glider Flying Handbook.—CC

To make matters even more confusing, the Airplane Flying Handbook offers the following advice for practicing an engine failure scenario: “To enter a glide, the pilot should close the throttle and, if equipped, advance the propeller lever forward. With back-pressure on the elevator flight control, the pilot should maintain altitude until the airspeed decreases to the recommended best glide speed.” This is the worst advice possible regarding the propeller configuration! The moral of the story is that reading these manuals with a critical eye is important in extracting the best emergency procedure.

In a perfect world, a flat field devoid of obstacles would be in easy gliding distance so that we could direct the airplane into the wind and land with the lowest possible energy. What I love most about my home in beautiful southeastern Tennessee—the rugged and forested Cumberland Plateau—makes it a far-from-perfect venue for an engine failure. The decision on which direction to glide should be made with efficiency but not so hastily as to miss a good option. Ideally, the wind would be guiding us toward the perfect field but winds and favorable terrain may be at odds. Electronic charting tools like ForeFlight Mobile and Garmin Pilot can assist in choosing a safe area. (See “Electronic Flight Bag Tools,” at right.)

If possible, plan to have 1,000 feet of altitude to spare at the landing site in order to maneuver and land into the wind. Excess groundspeed at touchdown can have a profound effect on the outcome because the energy dissipated on landing, and potential damage from hitting an obstacle, involves the square of the groundspeed.

Consider an airplane with a touchdown speed of 60 knots landing in an area with surface winds of 10 knots. Touching down downwind with a groundspeed of 70 knots (a 17-percent increase) results in a 36-percent increase (1.172 = 1.36) in energy to be dissipated. On the other hand, using that 10-knot wind to your favor by landing into it reduces that energy by 31 percent compared to no wind. That means the energy at touchdown landing into the wind is half that of landing with a tailwind. Wind matters and should play an integral role in choosing a landing site.

Maximize your own safety budget

Louis deserved much credit for his emergency descent procedure. He calmly and efficiently used his checklist to set up a glide toward favorable terrain and even used a technique from his experience flying gliders to further increase his glide distance. When he noticed that he wasn’t getting the glide performance he expected, he chose a field in easy glide distance and maneuvered for a landing into the wind to decrease the energy to be dissipated on touchdown. But the fact that he wasn’t getting anywhere close to POH glide values nagged him. I suggested that Louis make his own checklist for the airplane. Louis took his practical exam with a deeper understanding of the airplane and passed with flying colors.

In an emergency, we fall back on our training and hopefully use the balance in our safety budget wisely. Carefully reading the operating handbook and training manuals ahead of time means that starting balance is as high as possible. The process of writing my own checklist elicits questions that encourage me read the POH critically and more completely. Amplified procedures, glide polars, and energy equations aren’t helpful when actions need to be quick—unless they have been incorporated into a checklist.

New features in electronic flight bags can assist in locating a safe landing area within the gliding distance. ForeFlight’s Glide Advisor and Garmin Pilot’s Glide Range Ring employ the aircraft glide ratio, altitude, terrain information, and, if available, wind information to display a glide region on the electronic sectional chart—but they should be used with care.

Catherine Cavagnaro owns and operates Ace Aerobatic School in Sewanee, Tennessee, and is professor of mathematics at The University of the South. She is a speaker at the 2018 AOPA Fly-Ins.