Get the app Get the app
Already a member? Please login below for an enhanced experience. Not a member? Join today
News & Media Fly fishing and flying in 'down east' Maine

Fly fishing and flying in 'down east' Maine

The bald eagle had been eyeing us for several minutes from atop a tall tree on the Canadian side of the St. Croix River separating Canada and the United States in southeastern Maine.

“We’ll give him some breakfast,” said guide Jeff McEvoy, as he let out a whistle. The eagle cocked his head at the sound as McEvoy tossed a chub into the river 30 feet from our canoe. The mammoth raptor looked on warily for a few beats as the fish floated a little farther from the boat. Just as we thought he was going to disappoint us, he launched off the snag, his massive wings creating a loud whoosh as he swooped down for the fish…and missed! He did a respectable go-around and landed in another snag downstream, still on the Canadian side. A couple of minutes later as the fish slowly drifted downstream, he launched again, this time with success, carrying the chub to another tree for breakfast.

The entertaining eagle encounter was just a pause in our catching for the day. We weren’t “fishing”—we were “catching.” Almost every time I flicked a line over the side, I would have a bite within a minute or less. Sometimes the small mouth bass or pickerel would hit just as the bait splashed in the water.

For hours we trolled along the quiet river, sometimes drifting, sometimes using the 10-horsepower engine to quickly sprint from place to place—the little engine scooting the handbuilt canoe along at a good clip. At times we’d team up with the other two boats in our group of pilots who have made the trip to Weatherby’s a regular vacation for decades. 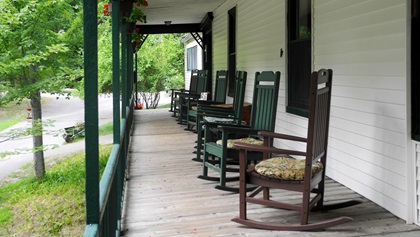 McEvoy, a Master Maine Guide, bought the fishing and hunting lodge in 2003. But as we know with antique airplanes and warbirds, one doesn’t really own a grand old sportsman’s lodge like Weatherby’s. A person is just the keeper of it for a while, protecting it for future generations to enjoy. The facility started out as a tannery in about 1880. Within a couple of decades the tannery was out of business, but the owner’s house—The White House, as it is called, survived on as first a boarding house for sportsmen anxious to fish the nearby Grand Lake Stream and hunt birds and deer. Later numerous rustic one-, two-, and four-bedroom cabins were added around the property, which is pretty much how it sits today. McEvoy has added modern bathrooms, electrical systems, and even Wi-Fi, but the cabins maintain their rustic charm with screened porches (yes, the stories about the Maine mosquitoes are true—but not much of a problem until after dark). With no insulation and not much in the way of heat, the lodge is a seasonal operation, open May through November.

Prices vary by season, but are typically between $199 and $229 per adult per night for the American plan, which includes lodging, meals, beer, wine, and access to fishing equipment; children are less. Guide services are additional. “Housekeeping” plans, meaning just accommodations and no food, cost less, but the food is well worth the price. Friday night is lobster night and not to be missed.

Of course, McEvoy and his guides are no slouches when it comes to food either. By noon on our Saturday outing we were beached on a remote crook in the St. Croix River, where seemingly out of nowhere the three guides produced pots, pans, firewood, utensils, and everything needed to create a gourmet lunch over an open fire. Fried potatoes, camp coffee, breaded and fried fish caught minutes earlier, thick steaks, and fresh cookies stuffed us all just as the rain started. The crew propped up a tarp and we all hung out telling fish stories (and a few hangar tales) until the cloud burst subsided. Then it was back to more catching. 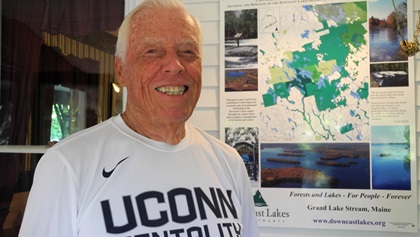 With us was Sid Ellner, a Korean War bomber pilot, who today flies a Cessna 172RG out of White Plains, New York. Ellner brought his daughter Sue and her husband Kevin Mercuri. The group came along with Peter Blake, a longtime family friend, in Blake’s Cessna 182RG. The families have routinely visited the lodge for decades, their kids growing up with many fond memories of Grand Lake Stream. I first met Sid when we had the chance to fly B–25 Panchito together in 2017 when he revisited the airplane some 60 years after his last flight in the Mitchell.

The group lands at Princeton, Maine, about 20 miles south and an easy pick up for McEvoy. The 4,000-foot runway was rebuilt in 2017 at Princeton Municipal Airport. Fuel is usually available, but notes on AOPA’s Airport Directory suggest calling the airport manager in advance to be sure.

We elected to land at Bangor, Maine, because we needed a rental car for other travel in the region. The two-hour drive to Grand Lake Stream gives you a sense of the deep woods and lumber business in “down east” Maine.

Whether you’re into fishing or hunting or not, Weatherby’s and the surrounding lakes, streams, and woods is worth a visit—it’s like a step back to simpler times, where friends and family return year after year, a place where the only thing new are the memories you make on each trip. 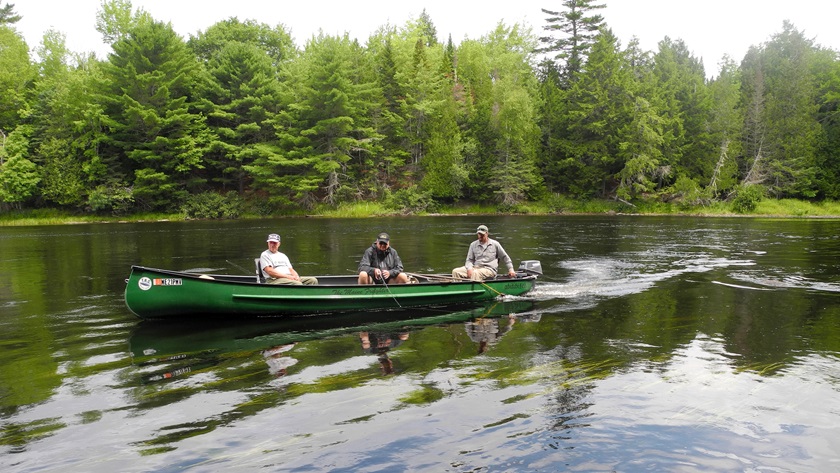 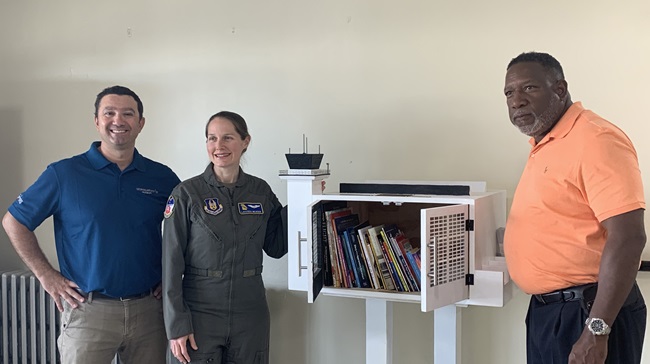