Get the app Get the app
Get the latest news on coronavirus impacts on general aviation, including what AOPA is doing to protect GA, event cancellations, advice for pilots to protect themselves, and more. Read More
Already a member? Please login below for an enhanced experience. Not a member? Join today
News & Media Stepping up

They were 20 to 40 years old. They were Americans intent on helping France, embroiled in a war that the United States had not yet entered. They represent a part of aviation history that is venerated in Europe but is not as well known in the United States. 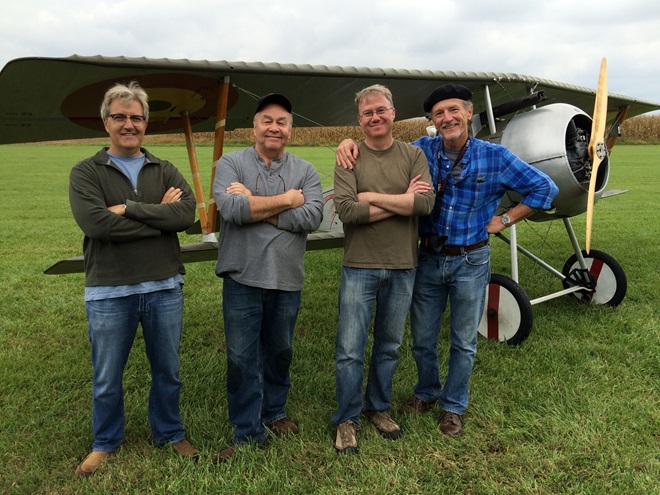 The Lafayette Escadrille team: (left to right) Mark Wilkins, Dan Patterson, Paul Glenshaw, Darroch Greer. Photo courtesy Paul Glenshaw.
The director of the documentary Barnstorming will showcase the volunteers, known as the Lafayette Escadrille, in a film he hopes to complete in 2019. Paul Glenshaw said the story intrigued him because “it’s about young Americans stepping up in a time of crisis. It’s a debt they felt they owed to France.”

The squadron formed in 1916 to fight alongside the French in World War I. The United States had not yet entered the war, but many American volunteers went overseas to fight for the Allies. France’s fledgling air service included numerous pilots, but the Lafayette Escadrille was composed mainly of Americans.

Two of the squadron members had direct ties to the founders of U.S. aviation. Norman Prince learned to fly at the Wright brothers’ flying school in Georgia, and he visited Huffman Prairie in Dayton, Ohio, where the brothers test-flew their aircraft. Aviation pioneer Glenn Curtiss taught William Thaw how to fly. 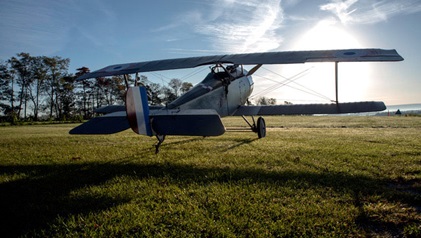 Squadron members flew Nieuport 17s and Spad VIIs on reconnaissance missions and during air-to-air combat with German pilots. “They went from one side of the western front to the other,” Glenshaw said.

Glenshaw said the documentary he is completing, along with Darroch Greer, Dan Patterson, and Mark C. Wilkins, will be the first feature-length film to tackle the subject. The crew shot footage at more than 40 locations in France, including the site where one of the squadron’s members was shot down and his aircraft crashed by the side of a road.

“When we went to film the marker, we had told nobody we were coming, and it was perfectly trimmed with flowers growing,” Glenshaw said. The squadron’s memory “is very much alive” in France, he said, noting that a memorial cemetery in Suresnes includes an arch, reflecting pool, and crypt with stained glass windows. The memorial was restored and rededicated in 2016 to commemorate the 100th anniversary of the formation of the squadron. 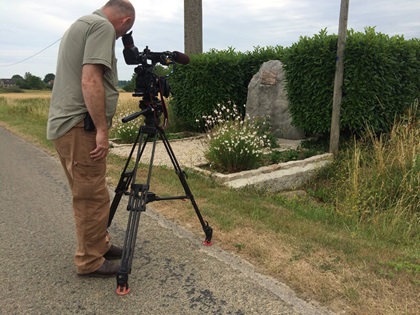 “Working with the families [of the volunteers], we’ve found material that hasn’t been seen,” Glenshaw said. “There’ll be photographs and words that have been buried away for a hundred years.”

While researching the documentary, Glenshaw discovered that several of the descendants of the squadron pilots are carrying on aviation traditions of their own. Brothers Guillaume and Regis de Ramel, the grandsons of Norman Prince, are pilots. Guillaume flies a Cirrus and an SNJ and built a Carbon Cub, and Regis owns aviation businesses in Delaware and Pennsylvania. Georges Thenault III, a pilot for American Airlines, is the grandson of the squadron’s commander. Lt. Col. Nick Rutgers is the commander of an F–15 squadron for the Oregon Air National Guard. He also flies a Beech Bonanza.

William Thaw Whitney, a distant cousin of squadron pilot William Thaw, “had no idea he was a relative,” Glenshaw said. “He had already become a pilot.”

Principal photography for the documentary has been completed—though a few more aerial shoots are needed before post-production work can begin. The film is being produced by Humanus Documentary Films Foundation.

“We would like to have it finished for the summer and show it at [EAA AirVenture],” Glenshaw said, “if all our dreams came true.”

In the meantime, you can view a 20-minute version commissioned by the U.S. World War I Centennial Commission here. More information about the film is available at the website or Facebook page, where you can make a tax-deductible donation.