Get the app Get the app
AOPA will be closed on Monday, February 17, 2020, in observance of Presidents' Day.
Already a member? Please login below for an enhanced experience. Not a member? Join today
News & Videos IFR Fix : Glass-cockpit greenhorn

Some years ago a private pilot preparing to start instrument training asked my opinion on whether to train with a steam-gauge or “glass” cockpit. 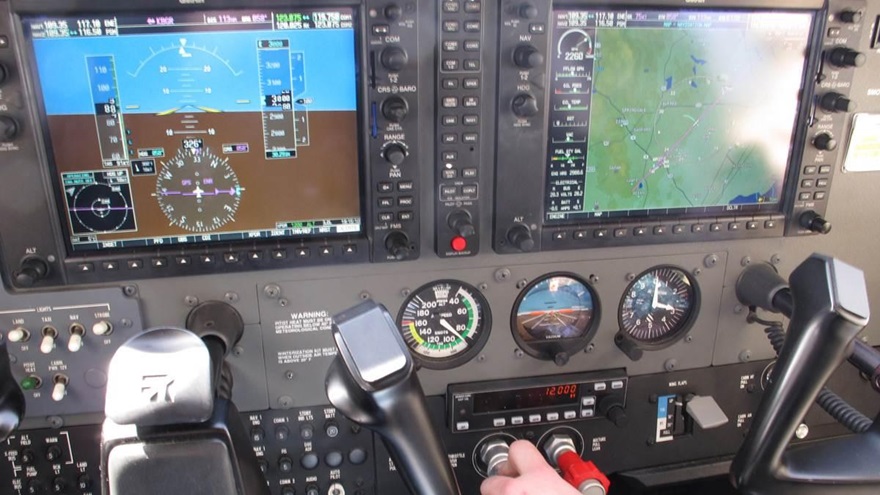 Learning the layout and developing a new scan are keys to a glass-cockpit transition. Photo by Dan Namowitz.

In case there’s someone out there still unfamiliar with the terms, “steam gauge” refers to instrument panels with traditional round-dial instruments. “Glass” alludes to modern panels with two electronic displays. There’s the inference that steam-gauge aircraft depend mostly on ground-based, or “legacy” navaids, which we all know are headed for dinosaurhood.

I wondered if I was, too.

I have taken the first steps to find out. In April, I headed to Maine’s Sanford Seacoast Regional Airport for a simulator introduction to flying a Garmin G1000-equipped Cessna 172.

For three learning-curved hours, I flew Southern Maine Aviation’s Redbird simulator through basic and approach-environment scenarios set up by my instructor, Michael Burns, who entered them in a laptop computer. I returned a few days later on a bright, gusty day for a combination rust-removal and glass-familiarization flight in their glass-cockpit Skyhawk SP with Automatic Dependent Surveillance-Broadcast traffic information.

Initial impressions: Cool stuff. There was quite a bit of head-down hunting for knobs to twist and buttons to push for entering flight plan information and setting up navigation modes, but that's why they call it familiarization. Clearly all that data can increase situational awareness once you know exactly where to find it. Until then, a pilot must avoid fixating on unresolved tasks or on locating elusive buttons.

Burns—a Floridian who’s my mirror image in that he is mostly a glass-grown pilot after his initial training—volunteered a confirming observation: Some pilots get carried away reacting to seeing airspeeds displayed to the knot or altitudes rendered in 20-foot increments on the vertical readouts on the primary flight display (PFD).

A glass suite depicts NextGen procedures or the old stuff with equal panache, so color-coded messages on the HSI remind you which type is active. I was pleased that an LPV approach (localizer performance with vertical guidance) felt just like an ILS once I acclimated to the system’s glideslope display.

Considered in conjunction with my recent rustiness, I will take my time with basic glass-cockpit orientation before tackling a true IFR checkout; I am in no hurry.

As for how I answered the beginning instrument pilot’s question: I recall saying it depended on whether she felt she would make quicker progress in the round-gauge world or its opposite, because the other would be waiting.

How would I answer now?

Let you know after a few more flights.