Get the app Get the app
Get the latest news on coronavirus impacts on general aviation, including what AOPA is doing to protect GA, event cancellations, advice for pilots to protect themselves, and more. Read More
Already a member? Please login below for an enhanced experience. Not a member? Join today
News & Videos Training Tip: What, no hammer?
Sponsored by Aircraft Spruce

I like a student pilot with a sense of humor. It makes it easier to critique a performance in real time and get a point across. 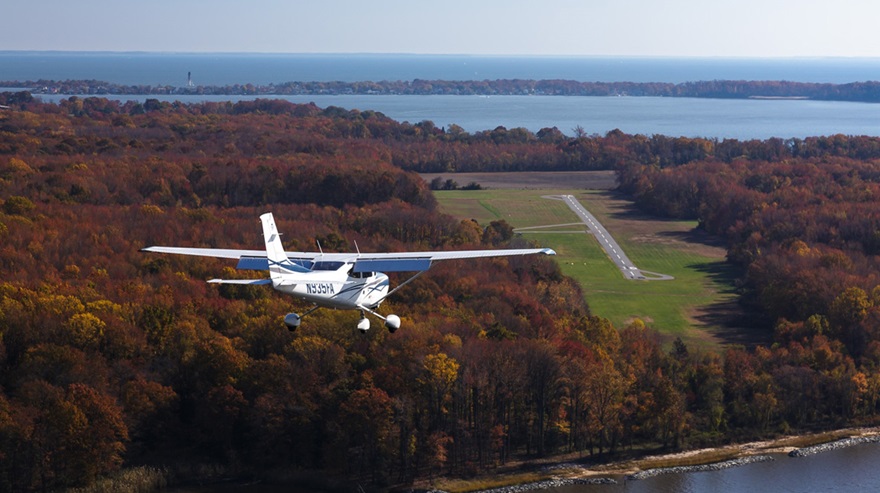 When a rusty pilot was taking some brush-up flights in a rental Skyhawk while an airplane he bought was undergoing an annual inspection, I observed several issues emerging. One was a tendency to turn downwind much too far from the runway.

This creates problems, a bunch of which presented themselves as we approached a 5,200-foot long, 100-foot-wide runway at a nontowered coastal airport.

Knowing he’d respond better to a ribbing than a scolding, I inquired if we’d decided to land. When he replied affirm, I pointed toward the runway, barely visible out his side window, and asked, “At an airport?”

Point taken—we were flying the correct altitude and heading, but twice as far from the runway as we should be. It was a combination of rustiness and lack of confidence—not ignorance. No need to throw the book at him.

Speaking of the book: According to the Airplane Flying Handbook, Chapter 7, a downwind “is flown approximately 1 ⁄2 to 1 mile out from the landing runway and at the specified traffic pattern altitude.”  It further advises maintaining pattern altitude “until at least abeam the approach end of the landing runway. At this point, the pilot should reduce power and begin a descent.” From our present position, it was apparent that reducing power abeam the approach end would have brought us perilously close to the thick tree cover below.

Whether you are a student pilot ,a rusty pilot on a flight review, or just out flying, be sure to demonstrate satisfactory knowledge, risk management, and skills associated with traffic patterns.

To his chagrin he now discovered that his positionally problematic pattern was proving peevish to pilots below. An aircraft was taxiing out for takeoff. We couldn’t see it, and I envisioned its befuddled pilot struggling to spot us, and good luck with that.

By now some readers are wondering, “Why didn’t you yank back the throttle and yell, 'Engine failure!' to hammer home the error?"

Granted, that would have made a dent. But this fellow had skills, and confidence, that needed reawakening. I’d resolved to save the hammer for next time, if necessary.

It wasn’t. When we landed back at our home airport, his traffic pattern was tight; if the engine had quit or been fake-failed by me, we were both confident—there’s that word again—that we would have glided to a safe landing with plenty to room to roll.