Get the app Get the app
Get the latest news on coronavirus impacts on general aviation, including what AOPA is doing to protect GA, event cancellations, advice for pilots to protect themselves, and more. Read More
Already a member? Please login below for an enhanced experience. Not a member? Join today
News & Videos Discover history, outdoor adventure at the nation’s second-largest canyon

A ride on a horse had never made me cry until a sunrise spent at Los Cedros Ranch, a private working cattle ranch on the north rim of Palo Duro Canyon south of Amarillo, Texas.

My eyes had teared up on our ride when we arrived at the breathtaking canyon overlook—posse style, rather than nose to tail. It’s quite a way to take in views of the nation’s second-largest canyon, but the real emotion came from our guide, ranch owner Phyllis Nickum, sharing the story of the slaughter of 1,400 ponies by the U.S. Cavalry when they led a surprise attack on the southern Plains Indians during the decisive Battle of Palo Duro in 1874. Legend has it, Nickum tells us as we take in the views, that if you listen closely you can hear the thundering horse hooves of the Comanche ghost herd riding the rim of Palo Duro Canyon.

Tears down the cheeks returned at the barn, when cowboy singer Erick Degler delivered La Primera, an Ian Tyson song written in the haunting voice of Spanish mustangs describing their centuries in the American West. What made this an emotional experience for me was the combination of riding on a beautiful piece of Texas land and riding on a piece of history. Nickum’s Cowgirls and Cowboys in the West offers one-, two-, and three-hour guided horseback experiences year-round with American quarter horses from championship bloodlines, all descendants from those great horse herds.

Horseback is just one of many ways to explore this canyon, which isn’t on many people’s radar. Zip a quarter-mile across the canyon and walk across a ravine on a 300-foot swing bridge at Palo Duro Zip Line Adventure Park, or head into the canyon where you can hike, bicycle, and ride horses on more than 50 miles of multi-use trails at Palo Duro Canyon State Park.

Fly into Rick Husband Amarillo International Airport, where you’ll want to explore the Texas Air and Space Museum. The museum is small (it is currently raising money for a larger display building) but has an interesting collection, highlighted by a 1945 Douglas DC–3 (N34) and a Gulfstream II used as a NASA astronaut training aircraft. This particular airplane was flown by Amarillo’s Rick Husband, shuttle commander who died during re-entry of space shuttle Columbia. Space memorabilia highlights the fact that Amarillo and the Texas Panhandle have been home to five astronauts, two of whom have walked on the moon. 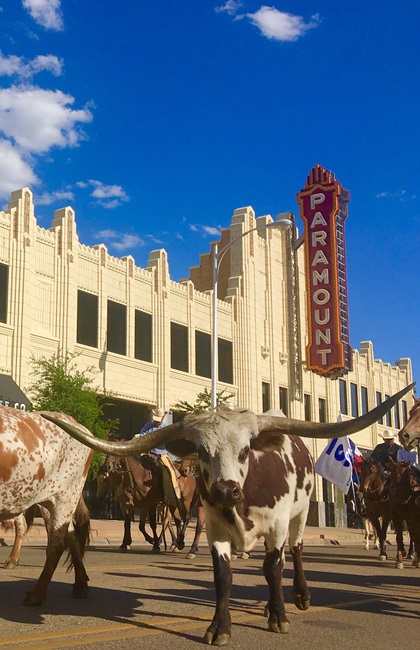 Palo Duro Canyon State Park is 30 miles south of the airport and encompasses just 5 percent of the canyon, which is 120 miles long, ranges from six to 20 miles wide, and is about 800 feet deep. In comparison, the Grand Canyon is 277 miles long, eight to 18 miles wide, and as deep as 6,093 feet. Unlike at Grand Canyon National Park, though, you can drive your vehicle on a 16-mile paved road that takes you into and along the canyon floor.

A visitor center with exhibits, a gift shop, and an overlook is on the rim, and in the canyon there’s a store serving breakfast and lunch as well as selling groceries and souvenirs. We explored about 20 miles of the park’s trails on foot and bicycle, including the park’s popular Lighthouse Trail. If you visit in the summer, heed the warnings about when to hike and water consumption; the panhandle heat is no joke.

The park also has Old West Stables, six campgrounds, three Civilian Conservation Corps-era rim cabins, and four primitive cabins on the canyon floor. We stayed just three miles outside the park entrance at Dove's Rest Resorts, a collection of nine newly built cabins and homes ranging from one to three bedrooms and all with full kitchens. Our one-bedroom cabin offered an unobstructed panorama of the canyon from the western rim. The views from the private patio as well as the picture windows in the bedroom and living room were breathtaking, as were the western-themed furnishings in the cabin.

Consider spending your mornings in the park and your afternoons and evenings exploring nearby communities. In the city of Canyon, 15 miles west and the nearest town to the park, don’t miss the Panhandle-Plains Historical Museum on the campus of West Texas A&M University. It’s the state’s oldest and largest history museum. Two million artifacts range from Georgia O’Keeffe art (she taught here and was inspired to paint at Palo Duro) to Comanche warrior Quanah Parker’s headdress and lance.

On the western edge of Amarillo is the popular roadside attraction: Cadillac Ranch. You’ll find 10 Cadillacs from 1949 to 1964 buried nose first in a wheat field alongside Interstate 40. Another fun and free attraction is the small RV Museum at the Jack Sisemore RV dealership. You’ll see the world’s oldest known Airstream and nearly 30 motorcycles on display, too.

The Big Texan Steak Ranch advertises itself like a roadside attraction, but the family-owned eatery does serve a great steak. The restaurant is famous for offering a free 72-ounce steak to anyone who can finish it along with a plate full of extras in 60 minutes. More people attempt it—and succeed—than you’d expect.

The American Quarter Horse Hall of Fame and Museum is worth a stop for horse lovers. It’s filled with art and exhibits that celebrate and preserve the history of the American quarter horse, beginning with the re-introduction of the horse to North America by Spanish explorers. It is a fitting place to end your Palo Duro exploration after spending time on one of the quarter horses at Cowgirls and Cowboys in the West.