PIA offers a secure endgame for its students 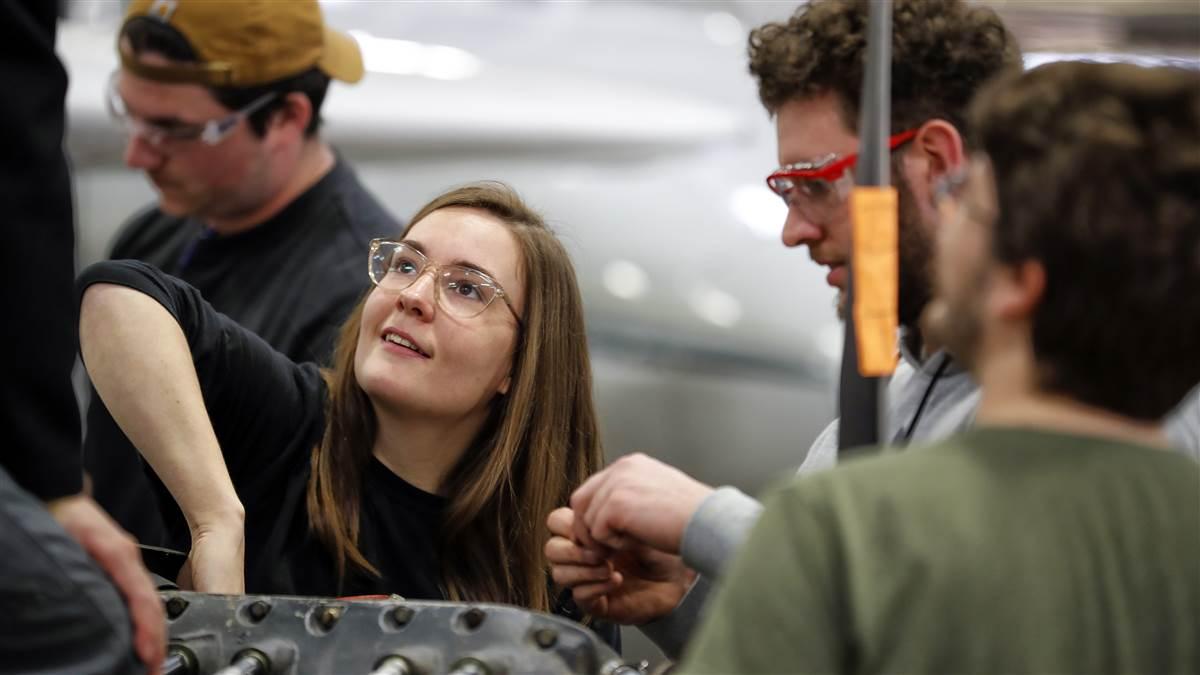 Kelly Martin is one of the 7 percent of female students at PIA. She’s graduating this summer and hoping to land a job with Pratt &amp; Whitney.
(Photography by Mike Fizer) 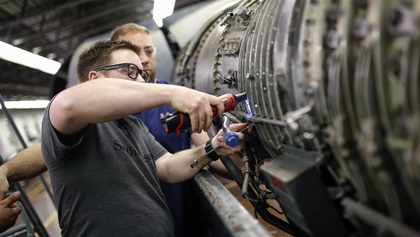 But it’s a tough question at 18 when the surety of high school is over, and even tougher when you’re 21 and spent a ridiculous amount of money to get a degree in sociology. It’s an even harder question to answer when you’re 30 and are in a dead-end job just to pay the bills, or worse, student loans.

“Somewhere along the way we convinced people that everyone had to have a college degree and that a trade was bad,” said Steven Sabold, director of marketing and information technology for the Pittsburgh Institute of Aeronautics. I am intrigued by his comment. What’s wrong with everyone earning a college degree? Isn’t this the American dream? But then I am even more intrigued by his next comment: “When you graduate from PIA, you can fix anything.” Anything? Many of us spend most of our disposable income hiring people to fix stuff. Mom might have said marry a doctor, but I wish I’d looked closer at the handyman.

There is no grass-covered quad or gracious columnated, ivy-covered brick buildings. No food hall with multiple selections for your every whim nor a football field, basketball court, or swimming pool. There are, however, classrooms and desks, and bells that ring to signal the end of a class session. The hallways are crowded with people carrying books and tools, and lockers slam as students rush to their next class. Teachers stand in hallways encouraging students to adhere to the mandatory 8 a.m. start time. In that, the Pittsburgh Institute of Aeronautics resembles most schools. But it’s the hands-on classrooms that impress—more than 50 engines of every size, make, and model are available to touch, tinker with, and learn from. Aircraft ranging from small Cessnas to midsize jets and helicopters are accessible to every student; the NTSB even conducts accident research here. 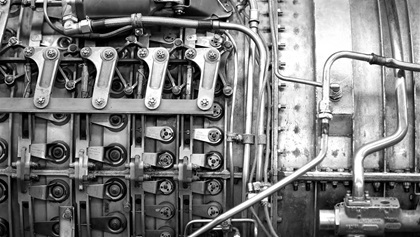 The Pittsburgh Institute of Aeronautics traces its roots to the very beginnings of aviation in this country. It grew from the Curtiss-Wright Flying Services established by Orville Wright and Glenn Curtiss in 1929. It was one of the first schools approved by the Civil Aeronautics Authority, predecessor to the Federal Aviation Administration (FAA). The school’s main campus is located about 10 miles from downtown Pittsburgh at Allegheny County Airport. There are satellite campuses in Youngstown, Ohio; Hagerstown, Maryland; and Myrtle Beach, South Carolina. Two degrees are offered: aviation maintenance technology (AMT) and aviation electronics technology (AET). The AMT program integrates earning an FAA airframe and powerplant certification. At the Pittsburgh campus, students earn an associate degree in 21 months, which includes aviation-related core courses in history, English, and mathematics. Non-degree-seeking students can earn a certificate in 16 months at Youngstown, Hagerstown, or Myrtle Beach. 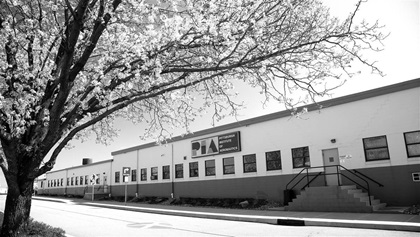 The Pittsburgh campus is more than 100,000 square feet of classrooms, shops, labs, and hangar space. It has 11 aircraft for study, including a Learjet 35 and a Beechcraft King Air 90. Currently, students are rebuilding a Cessna Skyhawk from the bones out. The avionics section includes electronics, state-of-the-art communications and navigation systems, and radar equipment. Students can earn an FCC general radiotelephone operator license. Many students enter the AET program but end up adding in the AMT requirements too.

Private pilot Zac Dorman enrolled in both the AMT and AET programs. Even though he’s held his pilot certificate since 2016, he admits the prior aviation knowledge only got him so far. “Starting here, you realize how much you don’t know—like you can drive a car but don’t know how it works,” he said. He’s hoping to stay in general aviation when he graduates this summer. “I love reciprocating engines; with my private pilot background, that’s what I love.”

PIA offers a best-in-class program and consistently provides high-quality students. —Kevin Dallaire, PiedmontKelly Martin was also a private pilot when she enrolled at PIA. She likes jet engines. “I’m hoping to get a call from Pratt & Whitney. I like bigger, better, faster. It’s a fantastic time to be an aviation mechanic.” 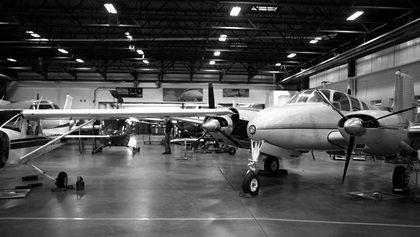 Forbes magazine named PIA the number one two-year trade school in the nation in 2018. It is the second time the school has been on the publication’s top list. “PIA is a 370-student gem,” Forbes said in recognizing the school. “It is virtually unknown outside the aviation industry, but its alumni out-earn students from two-thirds of Forbes’ highest-ranked four-year colleges at a fraction of the price.”

According to Boeing’s aviation outlook for 2018-2037, which has warned of a growing pilot shortage, the need for aviation maintenance technicians has never been greater. Boeing’s forecast said that 189,000 new AMTs will be needed globally in the next 20 years. Add to that a 30-percent retirement attrition, according to a survey by the Aviation Technician Education Council, and the job opportunities are great.

“We have a career-oriented-outcome mindset,” Sabold said. “PIA is a great return on your investment. There is nowhere near the number of people to fill positions. I ask parents: Where else does the employer come to you to interview you? There’s a tremendous need in the aviation industry, and employers are getting that message out there.”

Richard Myers graduated from PIA and now works for Endeavor Air. He is in charge of hiring AMTs for the company. “I try hard to recruit from PIA as the product I receive is normally a step above other candidates,” he said. “I did not realize how good the training I received was while attending the school. Endeavor started a program recruiting A&Ps within a few months of students entering the school. It gives the students a connection with an airline to answer questions and hopefully help them when they finish.”

Kevin Dallaire, recruiting manager for Piedmont, agrees: “PIA offers a best-in-class program and consistently provides high-quality students to join the Piedmont Airlines family. We are definitely seeing and experiencing the effects of the nationwide aircraft mechanic shortage. Piedmont is doing a number of things to help offset the effects and to position ourselves well for the future.”

There are more than 50 different types of aircraft engines available for study and 11 different aircraft to dissect at the Pittsburgh Institute of Aeronautics.The average age of a student at PIA is between 18 and 30; however, Sabold says students come from high schools, military service, and other careers. “We have a 59-year-old retiree who wants to stay active. He wants to get his certification to stay viable, maybe work on his own aircraft. Who knows? But he does know this is a great return on his investment.”

And what’s that investment? It costs $40,000 for the 21-month program. Students must find their own housing and support themselves, but the payoff is good: At least 87 percent of PIA students have jobs within six months of graduation. The median pay for aircraft maintenance technicians is $63,060, according to the Department of Labor (median U.S. household income is $60,336).

Admissions representative Rick Sparvero is a U.S. Air Force veteran with an aviation maintenance background. “I love helping students find their right path. The quality of life you can have in this industry is amazing—PIA can lead to a really good future.” So why isn’t he using his skills in aviation maintenance? “You never know,” he laughs. “It’s really good right now.”