The magic of Plane Savers

The airplane is supposed to make its first flight in little more than 24 hours. But the vacuum system is still erratic, the right propeller needs a new seal, and two com radios hang by their wiring harnesses from the cockpit’s overhead panel—among countless other tasks screaming for attention.

And there’s a crisis. The arrow on a new decal with emergency opening instructions for the airstair door points the wrong way, contrary to the Canadian Aviation Regulations, rendering the aircraft unairworthy. A heated discussion ensues. How could this happen? It’s too late to make a new decal. Can the arrow be reversed with Sharpie markers? Stella Heidorn, who applied the decal, steps forward and rips it off the door. Beneath it, the faded but legible original placard points in the correct direction. Problem solved.

Last December, and sight unseen, Mikey McBryan bought this DC–3 two time zones and more than 1,700 nautical miles from his base in Yellowknife, in Canada’s Northwest Territories. He decided to revive the neglected warbird on an aggressive schedule, planning its first flight in nearly 30 years for the seventy-fifth anniversary of D-Day on June 6.

Why? To preserve an important part of Canadian aviation history, he said, and because he believed he could pull it off. McBryan is general manager of Buffalo Airways—yes, the Buffalo Airways that operates DC–3s and other vintage transport aircraft in the Northwest Territories and was featured in the popular Ice Pilots NWT reality television series—perhaps the only organization in the world with the talent—and DC–3 parts inventory—to pull it off.

“Just showing up with a sea crate in the middle of a place we’ve never been…do you know how naive that is?”—Mikey McBryanBuilt as a C–47 by Douglas Aircraft Company at its Midwest City, Oklahoma, plant during January 1944, this airplane was one of 108 Royal Canadian Air Force transports launched late on June 5, 1944, to drop paratroopers—and a dozen 20-pound bombs, apparently—over Normandy in the opening hours of the D-Day invasion. After World War II it was converted to a DC–3C by Canadair; operated by Trans-Canada Air Lines; and from the 1970s until the late ’80s flew for Transport Canada as C-FDTD. A couple of efforts to preserve the historic aircraft faltered, and since the early 1990s it has languished at Montréal Saint-Hubert Airport in Longueuil, Quebec.

“Just showing up with a sea crate [a 40-foot shipping container filled with DC–3 parts] in the middle of a place we’ve never been, on an abandoned taxiway—do you know how naive that is?” asked McBryan, who named the project Plane Savers. “It was organic. This wasn’t something that we planned, so every little thing was a bonus.”

And he documented every step of the process, in 156 video episodes on his YouTube channel. His YouTube following grew from 750 to more than 35,000; by the second month, videos logged more than 75,000 views in their first 24 hours.

It started with just McBryan; his girlfriend, Stella Heidorn; and his uncle, Ronny McBryan, an experienced Buffalo mechanic. They had come out in January to assess the project, then returned in early April. “I took a really good inventory of what was missing. I only missed two little things,” Ronny McBryan said. “It’s amazing for an aircraft that almost went to the scrapyard.” The project ended with about 60 volunteers, including a core of 20—some working almost every day on the project.

In early January the airplane had no engines; the roof hatch was missing, the hamburger door was gone. A wing tip was badly scraped; fabric on the ailerons and rudder was shredded; there was no elevator. The cockpit was stripped, and birds had nested where the overhead panels should be. The flaps and fuel tanks, however, looked good.

Fast forward to June 5. First flight is less than 36 hours away. Beneath the fuselage, Normand Denis of Repentigny, Quebec, applies touch-up paint. He flew as a bush pilot until August 1989. “Since I’m retired, it’s a perfect opportunity,” he said, “even though I really should be home right now, painting my house.”

McBryan didn’t plan to repaint the DC–3, but Heidorn felt strongly that it needed to be done—and did a lot of it herself, with rollers and brushes. “It was simply necessary,” she said; the striping, including the nose, was freehand. DTD wears its Transport Canada scheme, with RCAF roundels to honor its military service and invasion stripes commemorating its D-Day role.

“It’s unbelievable, honestly,” said Fred Morin, an avionics instructor at École Nationale d’Aérotechnique (ENA), located on the field. “It was a wreck just a couple of months ago. Nobody believed that it had any useful life—now it’s come alive. It has a personality.” Students would see him in a YouTube episode and stop him in the hallways. “They would ask, ‘Can we get involved?”

“This is a truly magical thing that happened, something you couldn’t write,” McBryan said. “The biggest surprise to me out of this whole project is the school. ENA is the biggest aviation school in the world and just by luck, you can literally hit it with a football from where the airplane is sitting.” Without the school’s support, he said, the flight would not have happened on schedule. “I can’t sing the praises of the school enough, but it was out of pure luck that the school was next to us” (see “Perfectly Located,” on p. 65).

That evening McBryan is sitting in an ENA classroom, editing Episode 155, and there’s a knock on the door. Patti Hamilton and her husband, Andre, have driven six hours from St. Stephen, New Brunswick, to see tomorrow’s flight. “Every night we watch it in New Brunswick and we just arrived,” she said. “I can’t believe this. This is amazing.”

“That’s the power of this,” McBryan says later. “It’s not a million-dollar show, it’s not a team of producers.” The story’s soul is in the YouTube viewers’ comments, he adds.

June 6 dawns gorgeous and stays that way, in stark contrast to this project’s many cold, cloudy days. “This is one of the nicest days we’ve had,” McBryan observes. “It really makes me believe in a higher power.”

“The tailcone has issues,” says Benjamin Tessier, who has one year left in the ENA program. A replacement tailcone—the original had disappeared—had been on and off the airframe many times. Missing doublers weren’t discovered until the final inspection; they’re promptly added.

Tessier received a speeding ticket bringing a pizza lunch to the crew. Someone asks Ronny McBryan how many slices of pizza he’s had since the project started. “One hundred and forty-eight,” he replies. Tessier’s been offered a summer apprenticeship with Buffalo Airways.

Volunteers are cutting plywood to replace a couple of missing cabin floor panels, and 400 gallons of avgas is on the way. By 2:30 p.m. spectators are lining up along the airport fence. Things are getting real.

McBryan calls Bobby Douzepis his “number one volunteer.” He missed only four days over two months—and he’ll miss the first flight. The single parent’s daughter has a concert, and he’s never missed any milestones in the teenager’s life. “If he doesn’t get Father of the Year, this is insane,” says McBryan.

“When you guys are watching this grand old lady spread her wings and fly, I’ll be in Montreal watching my little lady spread her little wings, because she has a guitar concert tonight,” Douzepis says.

ENA student Laurie Breton of Brossard, Quebec, helps replace the seal on the Number 2 propeller. “The day before we got the props installed for the first time, we had just learned about that kind of propeller,” she says. Because she’s learned about modern and older technologies, she was not apprehensive about helping with DTD. “I love what I do.”

There’s an engine start at 3:20 p.m. to test the vacuum system. Rod McBryan—McBryan’s brother and Buffalo Airways director of maintenance—has arrived to make a final inspection of the airplane. He sees fluid in the left engine and asks the crew to make sure the primer isn’t leaking. Cowls come off. First flight is targeted for 6:30.

At 5:20, DTD is slowly towed toward the waiting crowd, which has swelled to around 1,000, many wearing Plane Savers and Buffalo Airways apparel. Also on hand are two retired Transport Canada pilots who flew DTD for the government.

“This aircraft defies all odds,” McBryan says, concluding some remarks. “Let’s get this started.” At 6:45 p.m. local time, C-FDTD gracefully lifts off Runway 24 Right. The crowd cheers over the roar of two radial engines.

To honor his grandfather, co-pilot Jones carries his certificates and logbooks on the flight, taking them “around the patch with us for one last ride.”

“He would have loved this, Joe,” Jones says to Joe McBryan during the flight.

Even the Saint-Hubert Tower joins in, transmitting in French and then English, “All aircraft waiting to take off, there will be some delays due to the presence of the DC–3. We’ll advise you as soon as we can take you up. Don’t call back.”

After the flight Joe McBryan tells his son, “I’ll give you a hug for doing such a good job. She flew very, very well.” McBryan wears his sunglasses, even though the sun is not in his eyes. It’s a strategy to hide his tears of joy.

Benoit de Mulder, who worked on the project whenever he could, owned DTD before McBryan and tried to raise money for a museum. “Today it’s good that [the funding] fell down, because it allowed this to happen,” he said. “It’s like a dream.”

The crowd lines up to tour the airplane, finishing at sunset, and DTD is towed back to its taxiway in the dark.

What’s next? C-FDTD will be displayed at EAA Airventure 2019 in Oshkosh. Beyond that, McBryan isn’t sure. He is certain that it will not enter the Buffalo fleet; even though it’s now a flying airplane, bringing it to current airline standards would cost half a million dollars.

Entertainment seems to run in McBryan’s veins, and he believes YouTube is more powerful today than network television. “The addiction of entertaining people is very, very strong,” he said. “So I want to be back to entertain people and save another piece of history.” Stay tuned for Season 2 of Plane Savers. 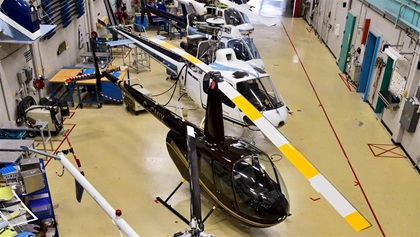 Jean Potvin, ENA’s quality assurance manager, initially helped the Plane Savers team with access to the DC–3, as well as the internet and restrooms. “I was working as a mechanic in the old days on these kinds of aircraft,” he said. “I understood exactly what they were going through.”

When the school closed over Easter, Potvin offered some open hangar space. That became more challenging when the wings were put on; the DC–3’s wingspan is wider than the hangar door. Adept maneuvering made it work.

Many ENA students and some staff volunteered on the project. Working with Ronny McBryan and the Buffalo team was a great opportunity for the students, Potvin said. “I think that’s the energy that makes the airplane fly. It’s more than a win/win situation; it’s a dream that we could make true.”—MC

C-FDTD wasn’t the only DC–3 commemorating the seventy-fifth anniversary of D-Day. Look for coverage of the Daks Over Normandy flyover in the September issue of AOPA Pilot.