Get the app Get the app
Get the latest news on coronavirus impacts on general aviation, including what AOPA is doing to protect GA, event cancellations, advice for pilots to protect themselves, and more. Read More
Already a member? Please login below for an enhanced experience. Not a member? Join today
News & Videos The tinkerer's 195 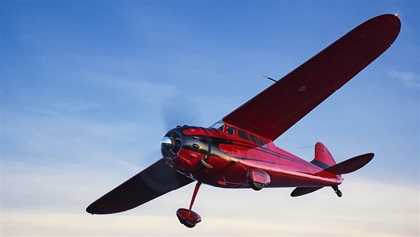 So stylish is the 195 that, when you compare it to its tricycle-gear cousins, you wonder how they managed to come from the same factory. The 195 sits tall and stately on the ramp and is a head-turner wherever it goes. Its sleek, curved fuselage says art deco more so than any other airplane except perhaps the Cessna Airmaster, a 1930s design that was the genesis of the 190/195 series. And the 195 has the chops to back up its good looks. The five-seat aircraft’s pilot’s operating handbook claims a cruise speed of 140 knots on 13 gph, and it has a maximum useful load of 1,320 pounds. And did we mention it looks good?

During its production run from 1947 to 1954, the 195 Businessliner was promoted as a traveling aircraft or a family van. Today’s owners treat their machines much the same. In the case of a Virginia airline pilot, his beloved 195 is both a commuter and a family hauler.

“If you don’t like to tinker, you don’t need to become a 195 guy because it’s something you need to get in and play with,” he said. Parker earned his airframe and powerplant certificate in 2014 and performs his own maintenance on the 195—and that can be an ongoing process.

Parker is a retired U.S. Army helicopter pilot who is a first officer for a major airline. He keeps N4469C in Virginia Beach, Virginia, and uses it to commute to his airline job. He flies to Tipton Airport in Odenton, Maryland, and then grabs an Uber to nearby Baltimore/Washington International Thurgood Marshall Airport, thus saving himself some steep parking fees at BWI.

The 1953 195B is named Red Dawg in honor of its red-and-black paint scheme. A previous owner who flew the airplane in Alaska painted it red so that if he crashed it, the wreckage would be easier to spot from the air. Luckily, that never happened.

N4469C isn’t Parker’s first airplane. He has owned a Cessna 210, which he sold in 2006 to join a partnership in a Cessna 340 “because I wanted a bigger, faster, badder airplane. It turns out it was only bigger—it wasn’t faster than a 210,” he said. He sold his share of the 340 and did not own an airplane for five years. When his wife, Anna, suggested they purchase another airplane, he started looking.

Initially Parker considered Cessna 180s, 182s, and 185s. He favored taildraggers, although he knew the Decathlon he’d flown wouldn’t work. “All the searching kept leading back to a 195—the good looks, the art deco [design],” he said. He liked the community of 195 owners. On top of that, the 195 was the hauler Parker needed. With three teenage daughters from a previous marriage, Parker wanted an airplane that could carry everyone.

Parker found N4469C in Oklahoma, where it had been languishing 10 years in a hangar after the death of its owner. The purchase price was $37,000. The airplane would need lots of time and aviation monetary units to get it airworthy, but as an A&P Parker could do much of the work himself.

The 40-year-old Jacobs engine needed an overhaul, so Parker arranged for Caleb Curry from Radial Engines Ltd. to ferry it to the shop in Guthrie, Oklahoma. “We did an overhaul on everything firewall forward in 2015,” Parker said.

Getting to know Red Dawg

Initially the 195 cruised at 120 knots, which Parker knew couldn’t be correct for a 275-horsepower airplane. “We dug into it and started checking the rigging and making sure everything was right,” Parker said. Rigged correctly, the airplane will cruise at 135 knots, he said.

A previous owner had installed a turbocharger on the Jacobs 755-B2 sometime in the 1960s. Parker removed the turbocharger and is glad he did. “Turbo leaks,” he said. “The turbo was getting cracks. The engine was running hot.”

In addition to the overhaul, Parker replaced all the avionics. Advantage Interiors of Marietta, Pennsylvania, removed the original interior, replacing it with caramel leather, and added a custom Cessna logo on the door.

‘All of my projects are little things’

Even though the list of repairs and improvements is long, Parker doesn’t like Red Dawg to sit. “I try never to put it down for more than two weeks, because it’s a flying project,” he said. “I want it in the air. I don’t want to miss Sun ’n Fun and AirVenture; I don’t want to miss flying it to work. All of my projects are little things.”

For example: a piano hinge for the glove box; rheostat cabin lights; and a retractable landing light for the right wing to match the one on the left wing. A push-to-talk switch, and a 406-MHz emergency locator transmitter. A left aft baggage door.

He’d like to get the 195 repainted, and there’s a slight dent in the left wing that needs attention. But those are projects for the future because they require more extensive down time, and because right now Parker wants to fly. In addition to commuting to his airline job, there are airshows, and trips with other 195 owners, and—the list goes on. He plans to be at AirVenture this year, so you might spy Red Dawg parked among 35 to 55 other 195s, near signs that say “Interstate 195.”

Parker has brought Red Dawg to Frederick Municipal Airport in Frederick, Maryland, so that we can fly it. Parked on the ramp outside AOPA headquarters as Parker does a quick preflight, people wander over. That is the appeal of the 195. If you see one, you’re compelled to get a closer look.

“All the searching kept leading back to a 195—the good looks, the art deco.” —Jeff ParkerParker and I enter Red Dawg by opening the single right-side door and climbing up onto the step, then squeezing between the front seats. AOPA’s social media expert Kevin Cortes gets the roomy backseat all to himself and is perfectly content.

The front window and the view are surprisingly narrow for such a large aircraft. The pilot’s side window cranks down like a car’s, although the right-side window does not.

The panel’s instruments are not original, and it sports a Garmin GNS 430. The avionics don’t look at all out of place in the 195. The airplane is certified for instrument flight, and Parker has no qualms about flying it in IMC—although his minimums are higher for this airplane than if he were flying a 310.

I’ve asked Parker about the 195’s handling reputation on the ground. “If you would like to ground loop a 195 it’s possible,” he says. “You just have to pay attention. When you land, you can’t daydream.” Well, that’s true of any taildragger. But the 195 probably earns that reputation.

Some 195s have what’s known as a crosswind landing gear, in which the main wheels caster about 15 degrees when exposed to a side load to mitigate the risk of a ground loop. N4469C doesn’t have the crosswind landing gear. While he’s landed in 12-knot crosswinds without any trouble, Parker says he thinks the modified gear would be a nice addition.

“The gear alignment is very important,” he says. “If the gear alignment is not correct, it’s a handful on pavement. It’s a heavy airplane, and once the tail starts going around if you don’t get on the rudder, it’s going around.” He has logged 400 hours in the airplane. “You need a lot of time in a 195,” he said. “I am just at the point where I could check someone out” in one, he said.

We taxi to Runway 23 at FDK, and after we are cleared to take off Parker lines up on the runway and adds power slowly. “If you want a great demonstration of P-factor, add full power quickly,” he says.

Between 52 to 61 knots, the 195 is off the ground. We climb out at 96 knots, which produces a climb rate of 800 to 1,000 feet per minute. This 195 holds 80 gallons, which gives it about a four-hour range with a reserve. Shortly after we depart the pattern, Parker hands me the controls. The 195 is trucklike in feel compared to the lighter single-engine aircraft I’ve flown. But it is a stately airplane, up to and including the power-on stall that concludes with a clean drop of the nose so long as the rudder and ailerons are coordinated.

“If the airplane is rigged right it flies beautifully hands-off,” Parker says.

Returning to the airport, we slow to 80 knots and add flaps. On base and final it’s still 80 knots, slowing to 70 over the numbers. Parker prefers to do a three-point landing if there’s no wind.

The 195’s round cowling makes the sight picture different than that of a flat-engine airplane, during both the flying and landing phases. At touchdown, Parker leans his head slightly to the left and uses one of the engine rocker cover bumps as an alignment guide. “This gives me a better view of the runway during touchdown and keeps me going straight,” he says. The technique works equally well for wheel and three-point landings.

While a glorious example of aircraft design, Red Dawg isn’t the most fabulous 195 flying today. But it is a working airplane and most definitely loved. He estimates he’s put $100,000 beyond the purchase price into the restoration, and says that if he did not have the A&P, he would’ve bought “the nicest 195 out there.”

Even with a tinkerer’s airplane, Parker must be feeling the need to flex his A&P muscles. He recently purchased an RV–8 project from a hangar neighbor. Parker says he and Anna want to get the RV–8 finished and flying so that the previous owner can be the first passenger to go for a ride.

I know what you’re thinking: Does that mean Parker is going to sell Red Dawg? Not likely—at least, not when I last asked.