Get the app Get the app
Get the latest news on coronavirus impacts on general aviation, including what AOPA is doing to protect GA, event cancellations, advice for pilots to protect themselves, and more. Read More
Already a member? Please login below for an enhanced experience. Not a member? Join today
News & Videos 'Classrooms' offered as new aviation learning environment

How's this for innovation: Instead of studying all alone for FAA knowledge tests by reading a book, watching a video, or answering test bank questions on an app, there’s a place where people gather to study aviation together and ask questions of a living, breathing instructor. 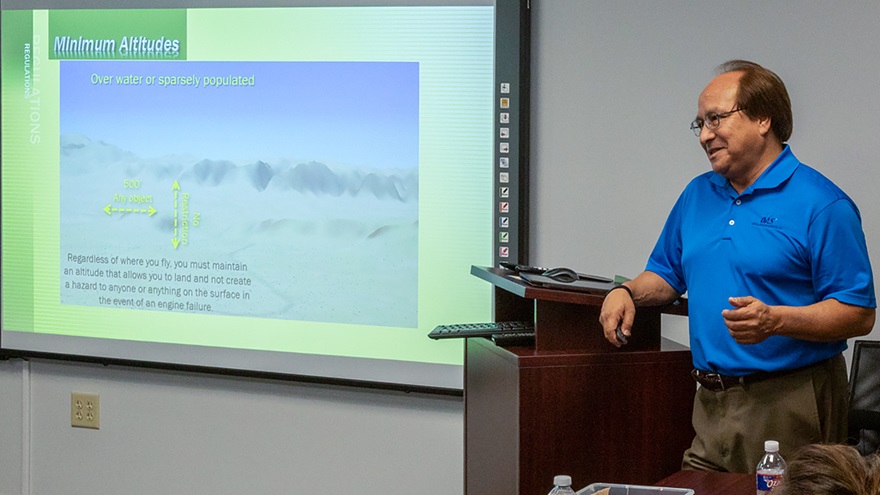 Sound intriguing? Then click your heels together three times, because when you open your eyes, you’ll be in Kansas.

Kirby and Teresa Ortega may be swimming against the technological tide by providing the ground school portions of pilot training courses in learning spaces that some of us will recognize as “classrooms.”

But they are wily industry veterans, not starry-eyed risk-takers. And they believe the service they began offering to aviation students in November in a state-of-the-art learning center in Wichita meets a real need.

Ortega Aviation Services, located at Dwight D. Eisenhower National Airport, is offering its students a “live learning experience” for the ground school learning required for any pilot certificate or rating that requires a knowledge test endorsement.

That’s not to say it’s aviation unplugged. Smart boards, large displays, and Wi-Fi are used. Students get electronic tablets—theirs to keep—preloaded with all course materials and flight planners. Lessons are instructor-led but can include online presentations.

“Everybody jumped in with both feet,” she said, noting that the first group of private pilot students were so new to aviation that she found herself “going out to buy nine logbooks.”

A new schedule of classes for those flight privileges has been set for January. Meanwhile, courses for commercial drone operators and aviation learning sessions for science, technology, engineering, and math (STEM) teachers will also launch.

The company is a flightless operation, said Teresa Ortega, a commercial pilot and the company’s managing partner. She told AOPA in a phone interview that future classes should draw on a well-populated aviation community including employees of Textron Aviation, flying clubs, and the many other aviation organizations located in the Air Capital region, as the Wichita area is known for its long history of aircraft manufacturing. The students will tap outside resources for their flight training, also drawing on the Wichita area’s many options.

Kirby Ortega, a 24,000-hour pilot and a flight instructing hall-of-famer, believes you can still make a strong case for what might fairly be characterized as an old-school ground training program, because the human element can help keep a student pilot who has become discouraged with self-study from giving up.

The Ortegas are not the first industry competitors to critique abbreviated or self-study alternatives by asserting that those choices “only teach a student how to pass a test,” but don’t touch “the fundamentals of flying.”

By contrast, they say, Ortega students are not cut loose to take the FAA knowledge exam when classes are complete. If students need to tidy up their knowledge-test prep based on practice test scores—nailing 80 percent deems you ready for the real thing—the Ortega organization will still be there for them.

Following the upbeat initial classes, Ortega Aviation Services has posted the next class schedules online. In December, an advanced aviation training device may be available in the school’s simulator room to help instrument-rating trainees prepare for their exams.

As of late November, four students were enrolled for the drone course that begins December 4.

“Kirby and I have a huge passion for aviation,” she said. “His is teaching. Mine is fostering aviation in the younger generation.”