Get the app Get the app
Already a member? Please login below for an enhanced experience. Not a member? Join today
News & Videos Italian aviator Francesco Volpi dies at age 105

Editor's note: This article was updated Dec. 9 to clarify attribution.

Francesco Volpi, a decorated Italian Air Force pilot who earned his military pilot certificate at age 21 and went on to count more than 80 years of active flying, died November 19 at age 105. 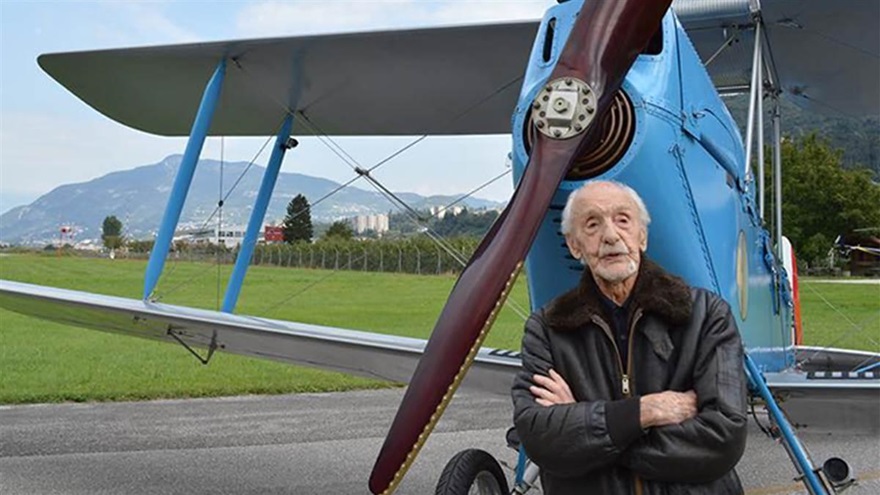 Pilot and retired decorated Italian Air Force pilot Francesco Volpi prepares to celebrate his 100th birthday in 2014 with a flight in a Caproni Ca.100 replica in Trento, Italy. Volpi was believed to be one of the oldest active pilots when he died at age 105 on November 19, 2019. Photo courtesy of Luca Perazzolli.

Volpi was believed to be one of the oldest active pilots in the world, the Italian news site Corriere Della Sera reported.

The retired World War II airman was born in 1914 and studied law at universities in Bologna and Padua. He flew 236 missions during assignments with the 246th Special Air Services and ferried supplies to the front lines of the Mediterranean and Soviet theatres, where he earned a bronze medal for valor.

After the war he served in various legal roles, directed a flight school, and taught mountain flying. The aviator was also credited with helping design and construct Gianni Caproni Airport in northern Italy, near the city of Mattarello. The Caproni aircraft company was an active European general and military aircraft manufacturer during aviation’s golden years.

When Volpi renewed his airman certificate in 2014 to celebrate his century mark, he chose to fly a Caproni Ca.100 replica similar to the aircraft that earned him his wings in 1935.

“Com. Francesco Volpi was a driving force in the history of Italian aviation, and aviation around the globe,” former AOPA Italy Vice President Massimo Levi wrote. “He will be sorely missed. Clear skies and tailwinds my friend.”