Get the app Get the app
Get the latest news on coronavirus impacts on general aviation, including what AOPA is doing to protect GA, event cancellations, advice for pilots to protect themselves, and more. Read More
Already a member? Please login below for an enhanced experience. Not a member? Join today
News & Media Fly-off: Four-seat faceoff

This fly-off began with a blowout—and then the contest got even more lopsided.

The first event, a simultaneous, side-by-side, maximum-effort takeoff, showed the AOPA 2020 Sweepstakes Van’s RV–10 accelerates so much quicker than the Cessna 182T Skylane that the two barely stayed in the same zip code. The RV–10 broke ground about 100 feet shorter than the Skylane, and three seconds earlier. Then the RV–10 climbed at both a faster rate (1,400 fpm versus 1,000) and a higher airspeed (130 KIAS versus 110).

“We’re trouncing him,” a safety pilot in the RV–10 said two minutes into the flight as the airplane he was riding in pulled away from the similarly loaded Skylane. “I wonder if he still has us in sight.”

“I’m about a half-mile behind you,” the Skylane pilot chimed in. “I fell behind right off the get-go and never could close the gap.”

This contest pitting two of the most popular Lycoming IO-540-powered, four-seat, fixed-tricycle-gear, all-metal airplanes from the experimental and standard categories was shaping up as a rout. Both airplanes carried two-person crews of nearly identical weight, no baggage, and 60 gallons of fuel. That’s full tanks in the RV–10, and two-thirds for the Skylane.

Despite their similarities in design, materials, components, and purpose, the RV–10 and Skylane present stark contrasts: low versus high wing; stick versus yoke; and even though they’re both powered by six-cylinder Lycoming IO-540s, the Skylane engine is derated to 230 horsepower/2,400 rpm. The RV–10 uses all 260 of the Lycoming’s rated horsepower at 2,750 rpm.

Both airplanes climbed to 6,500 feet and flew beside a Beechcraft Bonanza A36 photo ship for the air-to-air images that appear with this story. Mike Filucci, AOPA vice president of flight operations, flew the Skylane with AOPA videographer Kurt Sensenbrenner; and Richard McSpadden, executive director of the AOPA Air Safety Institute, flew the RV–10 with Kollin Stagnito, AOPA vice president of publications.

Then the two pilots positioned their airplanes side by side about one-quarter mile behind the doorless Bonanza photo ship for a flat-out drag race. The race pilots simultaneously opened their throttles, and the result was a replay of the convincing RV–10 win at takeoff. The lighter, more powerful RV–10 surged ahead and extended its lead going away. Another blowout.

Stagnito, in the right seat of the RV–10, read off the increasing airspeed in 10-knot increments, effectively rubbing salt in the wound.

It was hard not to feel sorry for the Skylane—one of the most beloved utility airplanes of all time. But the Cessna was about to turn the tables on its rival. 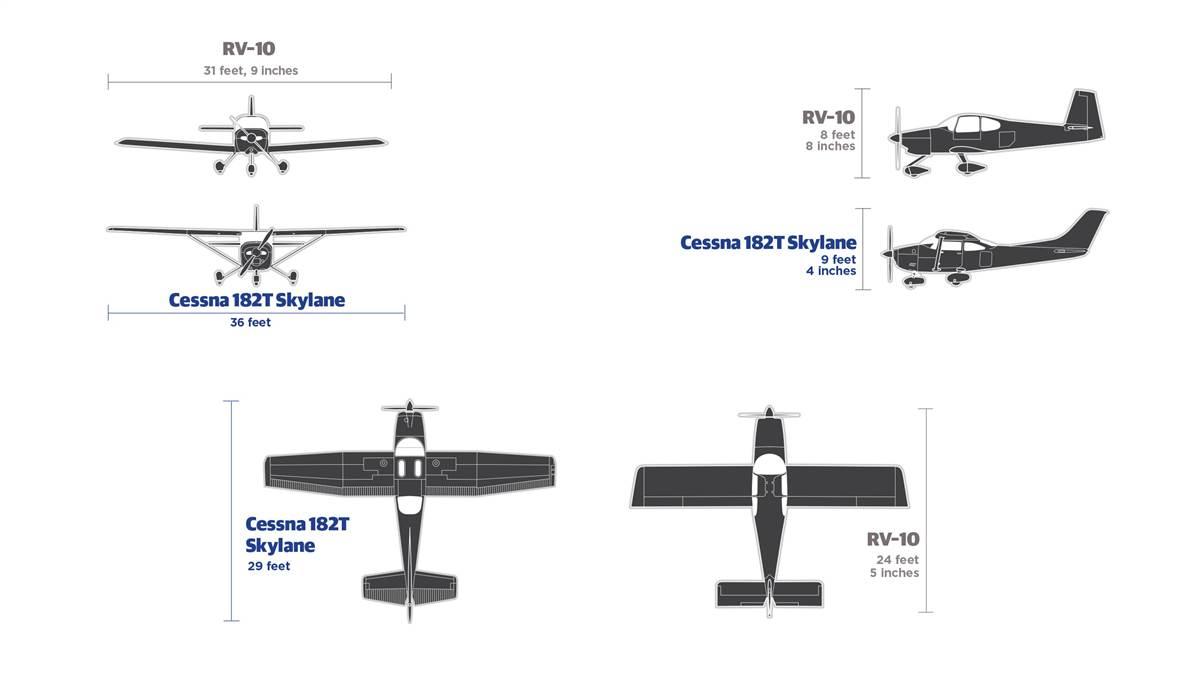 The lighter, more powerful, and more nimble RV–10 thoroughly outperformed the stately Cessna 182T in the high-speed and maneuvering events while the Skylane, with its bigger wing, won the slow-speed contests. The two airplanes are both meant for utility travel and use many of the same materials and components—but their design philosophies are poles apart.
Illustration by Steve Karp

All performance figures are based on standard atmosphere, sea level, gross weight conditions unless otherwise noted.

This Cessna 182T Skylane was built in 2001 and, except for avionics upgrades and rear photo windows, it’s totally stock with roughly 2,800 flight hours and a Vref value of $165,000. AOPA uses it for corporate travel, flight training, and aerial photography—and it’s a favorite among staff pilots for its ruggedness, load-carrying capacity, range, and versatility. I took it on a winter trip to Maine during which it was burdened with three adults, camera equipment, cold-weather gear, and topped-off fuel tanks. Then the airplane climbed to 11,000 feet, flew for four hours—and landed with three hours (38 gallons) of fuel remaining. Few piston singles could perform such a feat, let alone keep us warm at altitude with an outside air temperature of minus 12 degrees Fahrenheit.

The RV–10 was built from a Van’s Aircraft kit, first flew in 2007—and it’s an airplane you’re hearing a great deal about because you can win it in 2020. At the time of the fly-off, it was valued at about $155,000, had logged about 650 total flight hours—and it’s a mechanically sound “diamond in the rough.”

At the time of the fly-off, however, the RV–10 was unaltered.

The RV–10 and Skylane fly side by side and steadily decelerate for the slow-flight portion of the fly-off. McSpadden calls out diminishing airspeeds from the RV–10 as the two pilots leave wing flaps in the full up position.

“I’m slowing to 70 knots,” McSpadden says as the Skylane keeps pace. “I’m getting some buffeting at 65. Power at idle. And there’s the break at 62 knots.”

The RV–10’s right wing drops 30 degrees and the nose falls 20 degrees below the horizon. Meanwhile, the Skylane flies along placidly, its stall warning horn chirping intermittently.

Both airplanes repeat the exercise with flaps down, and the result is the same. Even though the RV–10’s broad slotted flaps reduce its unaccelerated, power-off, full-flap stall speed to 48 KIAS, the Skylane can maintain flight even slower than that.

Both pilots raise the flaps, add engine power, and accelerate to 120 KIAS.

Then the Skylane moves behind the RV–10 for a roll-rate comparison.

“No doubt about that,” Filucci agrees.

The last item on our fly-off punch list is short-field landings—a task made tricky by a surface wind gusting to 18 knots well aligned with Runway 30 at AOPA’s home base in Frederick, Maryland. Both airplanes make their final approaches at 60 KIAS and full flaps, and they touch down firmly on the runway numbers. The Skylane stops about 700 feet from the runway threshold with moderate braking, and the lighter RV–10 stops even shorter at 600 feet from the threshold. Reviewing the video tape, however, shows the airplanes touch down at the same speed, decelerate at the same rate, and their ground roll is virtually identical. The RV–10 stopped shorter because it touched down shorter.

The RV–10 and Skylane exemplify the best of their divergent breeds.

The experimental amateur-built RV–10 comes from a designer, Richard VanGrunsven, whose airplanes all share responsive handling, mechanical simplicity, economy, and versatility. Even though the RV–10 isn’t aerobatic like so many other Van’s designs, its crisp, sporty handling is a Van’s hallmark.

Experimental aircraft such as the RV–10 also provide the flexibility for owners to install cutting-edge, non-TSO avionics and accessories—often at far lower cost than FAA-approved products. And the upgrades the AOPA 2020 Sweepstakes RV–10 will undergo are meant to draw attention to these marvels. Even mundane items are different for experimental airplanes. A replacement plastic light cover for an RV–10 is $75, for example, while a similar FAA-approved part for the Skylane is $500. The list goes on and on.

The RV–10 does have some drawbacks. Getting in and out without stepping directly on the seats can be awkward; the gull-wing doors have an annoying habit of dropping at precisely the wrong moment; the elevator trim motor is slow (and there’s no mechanical elevator trim wheel); the free-castering nosewheel, while mechanically simple and light, requires almost constant differential braking while taxiing in a crosswind.

On a purely personal level, I abhor left-hand joysticks. There’s no reasonable explanation for this since I’m fine with a left-hand yoke, or a left-hand side stick. But a floor-mounted control stick belongs in a pilot’s right hand, and a lefty stick, to me, is an abomination. Whenever fellow pilots ride in the RV–10, I “generously” offer them the left seat—although in truth I’m being selfish. I’d much rather fly righty.

The freedom that comes with the experimental category obviously means less FAA oversight, and that’s a big plus in my opinion. But many pilots and passengers totally reject the idea of putting themselves, or their families, in any aircraft labeled experimental. The word is a disqualifier. And while the safety record of experimental aircraft has improved in recent years, it’s not as good as the factory GA fleet—and it may never be.

Conversely, the Skylane has been in production since 1956, and it’s a highly refined, thoroughly tested, forgiving, stable, and dependable aircraft. The fact that more than 23,000 have been produced is a testament to the Skylane’s enduring usefulness and worldwide popularity.

It’s extremely comfortable for pilots and passengers alike, relatively quiet inside, and it’s got the range and endurance of a camel. If you ever have mechanical trouble in a Skylane, experienced mechanics and replacement parts are plentiful.

My chief complaint about the Skylane is that all that refinement makes it boring. Pilot workload is so light that there’s little to do in flight except stare at the instrument panel—and the panel itself is so high it’s hard to see beyond it, especially during climbs. Also, the Skylane is a baby boomer, and like so many of us boomers, it’s gained heft. This T-model, for example, is nearly 300 pounds heavier than a 1956 Skylane.

Given the RV–10’s decades-newer design, lighter weight, greater power, and freedom from FAA certification standards, I wrongly anticipated it would run the table on the Skylane. The fact the Skylane came out ahead in some of the slow-speed portions of this fly-off is a moral victory for it.

The RV–10 won this fly-off by a wide margin.

The Skylane also showed why it does so well in the marketplace. 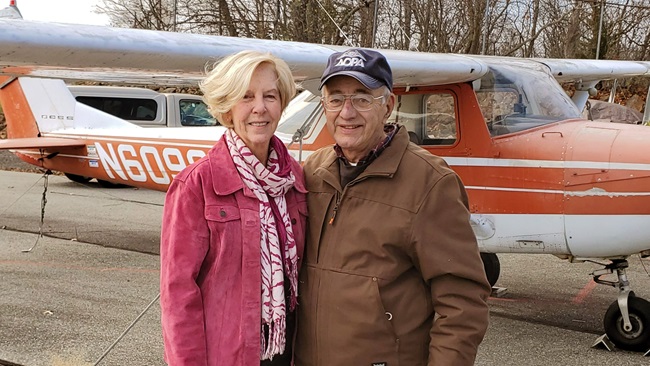