Get the app Get the app
Get the latest news on coronavirus impacts on general aviation, including what AOPA is doing to protect GA, event cancellations, advice for pilots to protect themselves, and more. Read More
Already a member? Please login below for an enhanced experience. Not a member? Join today
News & Media Volunteer Pilot: John Billings

A pilot for life

John Billings’ love of flying started early. On his third birthday, Billings and his father went on an “air ride”—a basic mode of transportation today, but a thrilling novelty in 1926. The flight lasted approximately 10 or 15 minutes. To the wide-eyed future pilot, it seemed to last the entire afternoon. This was just the beginning for Billings, who at 96 is still flying. 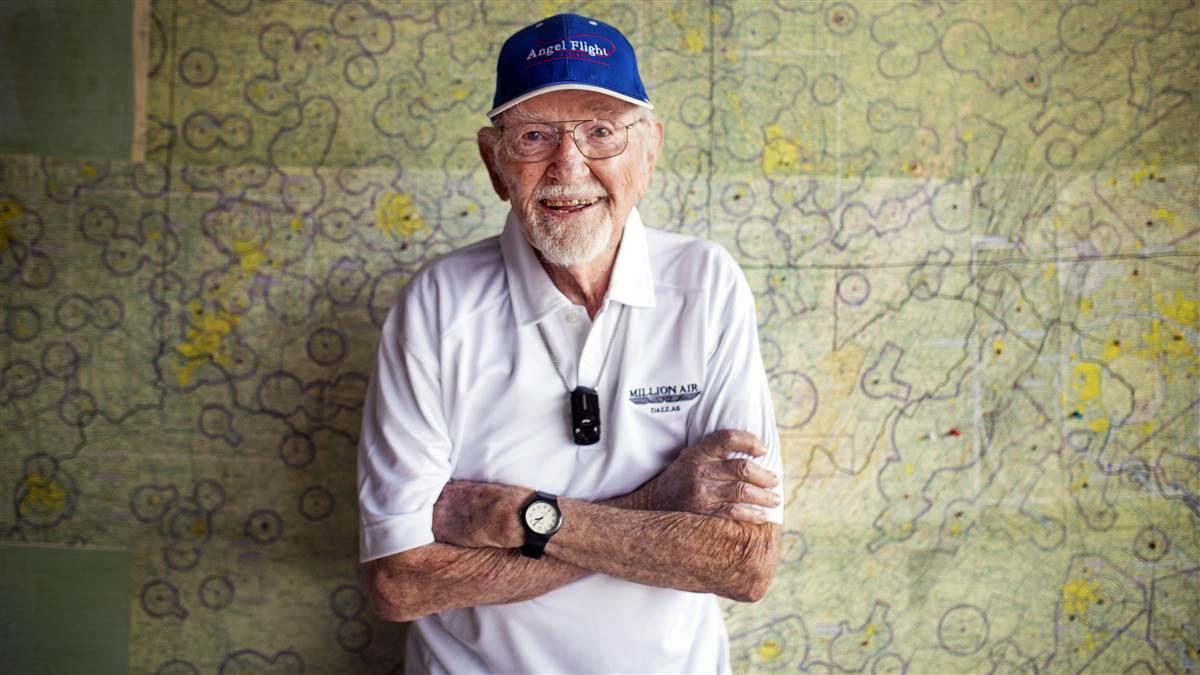 Extra | In 2015, Billings embarked on a special mission, dubbed “Wings Around America.” The purpose was to raise awareness for Angel Flight Mid-Atlantic. He flew around the continental United States in 13 days, stopping in 25 states. One of the stops was Victorville, California, where he had piloted B–24 bombers 70 years ago. The total distance of the flight exceeded 5,500 miles. Billings won the Endeavor Award that year.

In the summer of 1938, Billings had his first flying lesson in a Taylor Cub. When the United States entered World War II, Billings volunteered for the Army Air Corps. He soon took to the air flying B–24 bombers over Europe, with the 825th Bomb Squadron of the 484th Bombardment Group. The clandestine Office of Strategic Services (OSS), a predecessor to the CIA, took note of Billings’ flight record and called for his assistance. Billings went from dropping bombs to dropping off spies. By the end of the war, he had flown 39 missions for the OSS. He earned the Distinguished Flying Cross for his service in the Army Air Corps. Decades later, he was awarded the Congressional Gold Medal for his crucial role in the OSS missions, which included Operation Greenup. Billings also piloted B–24s at the Victorville Army Air Field in California. He served on active duty until 1946, but continued serving through 1947 as a reservist.

When the U.S. Air Force became an independent branch of the military, Billings had two choices: get the new uniform, or resign his commission. He couldn’t afford the “blue uniform,” and gave up military flying. From 1946 to 1948, he was a flight and ground instructor at Hanscom Field (BED) in Bedford, Massachusetts. He flew briefly for TWA, then joined Eastern Air Lines for a career that spanned 35 years. Billings didn’t stop until he reached the mandatory retirement age.

Even after retiring from commercial aviation, Billings continued to fly. In 2005, Billings signed up to be a volunteer pilot for Angel Flight Mid-Atlantic. Since then, he has flown more than 435 missions for the nonprofit. Billings and about 400 other volunteer pilots help financially challenged patients access medical care, regardless of distance.

Billings doesn’t fly solo. A friend and fellow pilot, Nevin Showman, accompanies him on missions. Just don’t call them “co-pilots” (they prefer the term “flying partners”). They’ve shared Angel Flight Mid-Atlantic’s Pilot of the Year award for many years, including in 2018. That year brought Billings the surprise of a lifetime: He received the vintage U.S. Air Force “blue uniform” that he couldn’t afford in 1947.

In every sense, he’s a pilot for life.