Get the app Get the app
AOPA Members DO more LEARN more SAVE more - Get MORE out of being a pilot - CLICK HERE
We will be performing maintenance on our systems Tuesday, 9/27, beginning at 12:00 A.M. ET and ending at 6:00 A.M. ET. During this time, you may experience intermittent service outages. We appreciate your patience.
News & Media Piper Pilot 100: Smooth moves

Stripped down, decked out for a new generation of pilots

Editor's note: An earlier version of this story omitted endurance and fuel consumption numbers from the spec box. AOPA regrets the error.
Piper Aircraft is having a moment. 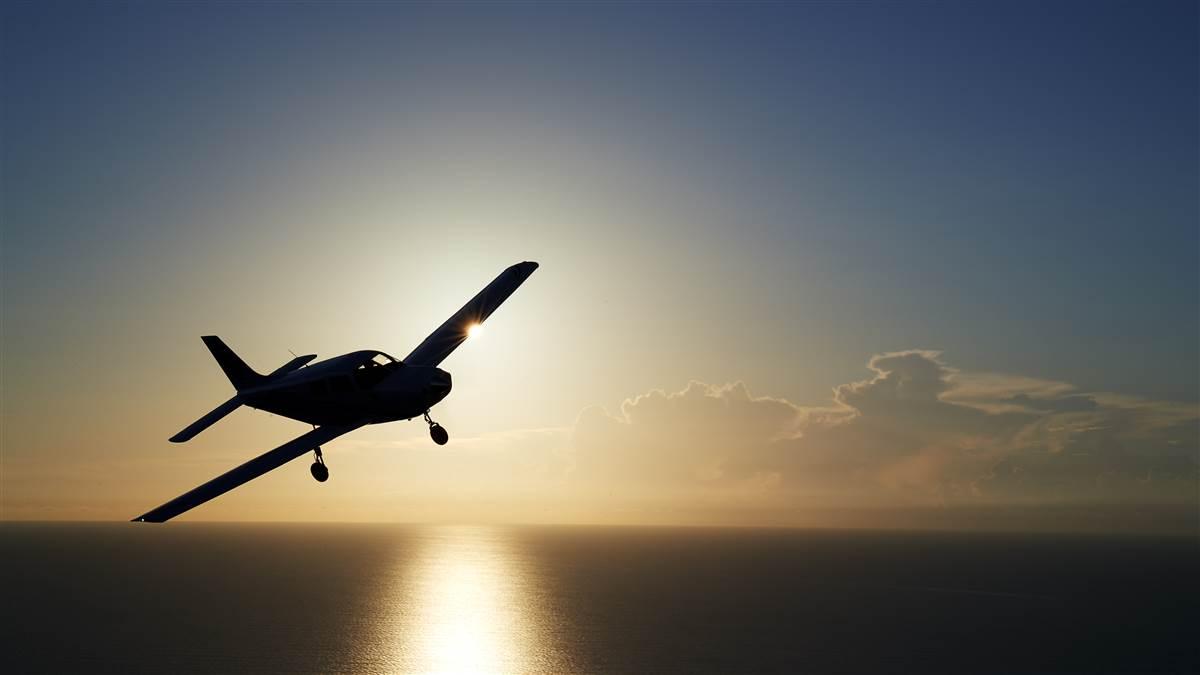 With the demand for pilots steadily rising, the Vero Beach, Florida, company is on track to deliver hundreds of new aircraft to flight schools worldwide over the next few years. Sales of PA–28s blew up by 126 percent in the second quarter of 2018, compared to the same period in 2017. Deliveries of all aircraft in 2018 increased 48 percent—to the highest level in 10 years. A new apprenticeship program is in place to keep the factory staffed with qualified journeymen in aircraft assembly.

"Everyone loves it" said Elise Wheelock, who is a marketing coordinator for Piper. "It's such a highly capable aircrasft. You don't lose much capability from the Archer, even though you lose $100,000 off the price."In the midst of this, Piper stepped back into the demo spotlight early in 2019, unveiling a new airplane at the Sun ’n Fun International Fly-In and Expo. Pilots who grew up with the Piper brand may have experienced déjà vu when viewing the Piper Pilot 100. That’s intentional. The Pilot 100 is meant to represent durability and reliability, but at a lower price point. While it’s much like the Cherokee your grandparents flew, it’s also very different.

Who’s got the airplane?

N28PP, Piper’s Pilot 100 demo airplane, is missing in action. It was supposed to be at the Vero Beach plant in late August when AOPA Senior Photographer Mike Fizer and I arrive to do a pilot report. But there’s a bit of a glitch.

A Piper employee flew the airplane from Florida to Maryland and got stuck on the ground in Virginia coming back, thanks to thunderstorms and low IFR. The demo airplane is placarded day VFR because of its experimental status, and so the pilot could not fly it in instrument conditions. It’s en route now.

Piper has lots of other airplanes, of course, and while we’re waiting for the Pilot 100 to get back home, Chief Pilot Bart Jones lets me fly an Archer LX, which is an Archer with leather interior, air conditioning, and Garmin G1000 NXi avionics. Here’s a tip on how you can tell if an Archer has air conditioning: look at the vents on the side of the fuselage. If they’re pointed toward the back, that’s for air conditioning. If pointed the other way, it’s for ventilation. 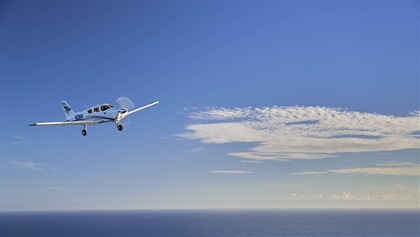 All specifications are based on manufacturer’s calculations. All performance figures are based on standard conditions and maximum weights unless otherwise noted.

Jones had hoped to show us an Archer DX powered by a 155-horsepower Continental CD-155 diesel engine. He can’t. “We don’t often have a diesel in-house, because as soon as they’re ready, they’re delivered,” he said. Instead we fly the LX, whose air conditioning makes sitting on the ramp on an August morning in Florida remarkably bearable.

The Pilot 100 does not have air conditioning. Nor does it have a baggage door. It doesn’t even have four seats. Here’s a Madison Avenue conundrum: How does one market an airplane that doesn’t have some of the basics?

That’s easy, at least for Piper—you focus on what it does have. The Pilot 100 and its IFR-equipped version, the Pilot 100i, are meant to be lower-cost trainers that can stand up to the often-punishing treatment of student pilots. And while it may lack some niceties, the Pilot 100 series doesn’t stint on what Piper perceives as necessary equipment for aspiring airline pilots: glass avionics, for example.

Elise Wheelock has been shepherding the IFR-equipped 100i since she first flew it to Sun ’n Fun in April. She’s put more than 250 hours on the airplane, flying it across the country to prospective buyers. By all accounts, they like what they see.

“Everyone loves it,” said Wheelock, who is a marketing coordinator for Piper. “It’s such a highly capable aircraft. You don’t lose much capability from the Archer, even though you lose $100,000 off the price.” Other cost-trimming features: a white paint scheme accented with decals; no sun visors; no instruments on the right side of the panel; two side windows rather than three.

The demo airplane has returned, and we are flying the Pilot 100i in Vero Beach’s window of weather before the afternoon thunderstorms start rolling in. We want to get away from the high volume of air traffic around Vero Beach Regional Airport, so after a normal takeoff we head east and position ourselves a quarter-mile or so offshore over the Atlantic Ocean.

The 100 handles like a PA–28. It is a variant of the Archer TX, so it will feel familiar to anyone who has flown a Cherokee or Archer: a heft to the controls; no surprises during power-on and power-off stalls; and an ability to produce passenger-pleasing landings with relative ease.

There is a surprise under the cowl, however: The Lycoming O-360 is out. In its place is a factory-installed Continental Prime IO-370-D3A fuel-injected, 180-horsepower engine. Continental says the engine is designed for high utilization, and its TBO is 2,200 hours. The Continental will be an option on other Archer models, but is standard on the 100.

The Pilot 100 has a sturdy interior, designed to stand up to student wear and tear. The switches for the battery master, fuel pump, and interior/exterior lights are outsized. The starter and magneto switches are located beneath the left yoke, a throwback to Cherokees of yore. (They likely will be moved again, to the center console, based on customer feedback.)

The interior may be simple, but the panel is well-equipped. The VFR version sports a Garmin G3X Touch with a 10-inch primary flight display. The PFD can be set up as a multifunction display with moving map. Add to that terrain, obstacle, and traffic alerts; georeferenced charts; and SafeTaxi, and your twenty-first century student pilot has situational awareness to spare. Mount an iPad on the panel—there’s plenty of real estate on the right side—and the pilot can stream flight plans to the G3X and vice versa via Connext.

Wheelock finds the avionics package highly intuitive. “I’ll get students who have never flown a glass cockpit, and it does not take them very long to adapt to it,” she says. “If you’ve used an iPad or an iPhone, or an Android, it’s very intuitive.”

"The Pilot 100 has a sturdy interior; designed to stand up to student wear and tear."The rest of the panel is all Garmin, from the single GTR 225 com radio to the GTX 345R transponder with ADS-B In and Out. The base price for the VFR configuration is $259,000.

For an additional $26,000, the 100i offers a second com radio, a Garmin G5 standby attitude indicator, and Garmin GFC 500 digital autopilot with Electronic Stability and Protection (ESP) technology, which prevents pilots who are hand-flying from exceeding pitch or roll limitations.

We try out the ESP by rolling into a 60-degree bank. Sure enough, the controls smoothly move against the pressure of the turn until we are returned to straight and level flight. ESP can be disabled if pilots wish to practice intentional maneuvers.

Similarly, ESP features overspeed and underspeed protection. Pull the throttle back and the airplane will slow down within 5 knots of stall speed. “The controls will fight you,” Wheelock says. If you continue to hold back-pressure, when the stall horn goes off, the system will announce “Airspeed, airspeed” and the autopilot will engage and pitch down to maintain VY.

The standard VFR seating configuration is two seats up front, but there’s another option: two in front, one in back. The third seat, called an observation seat, is positioned almost directly behind the center of the two front seats. This allows the backseat occupant to have a better view of what’s happening up front. The rear seat will have a Garmin GMA 245R audio panel with push-to-talk switch and Bluetooth, so that the backseat passenger can perform radio calls while the pilot flying practices steep turns or other maneuvers. The third seat option costs an extra $9,500 for the VFR version and is standard in the IFR version.

Rolling out the 100 and 100i in April 2019, Piper CEO Simon Caldecott said the new models are designed for smaller flight schools that want new airplanes. Will the price drop be enough of a draw? The 100 comes from a long line of success stories, so it’s reasonable to predict that the streamlined newcomer will carry the banner.