Get the app Get the app
Already a member? Please login below for an enhanced experience. Not a member? Join today
News & Videos What went wrong? Formation flight turns tragic

How a one-time mistake proved deadly

A group of Florida airpark neighbors depart in formation on a sunny spring morning for a breakfast fly-out. Pilots on this airpark fly formation a lot, and joining up to fly out for breakfast is a routine Saturday morning event. 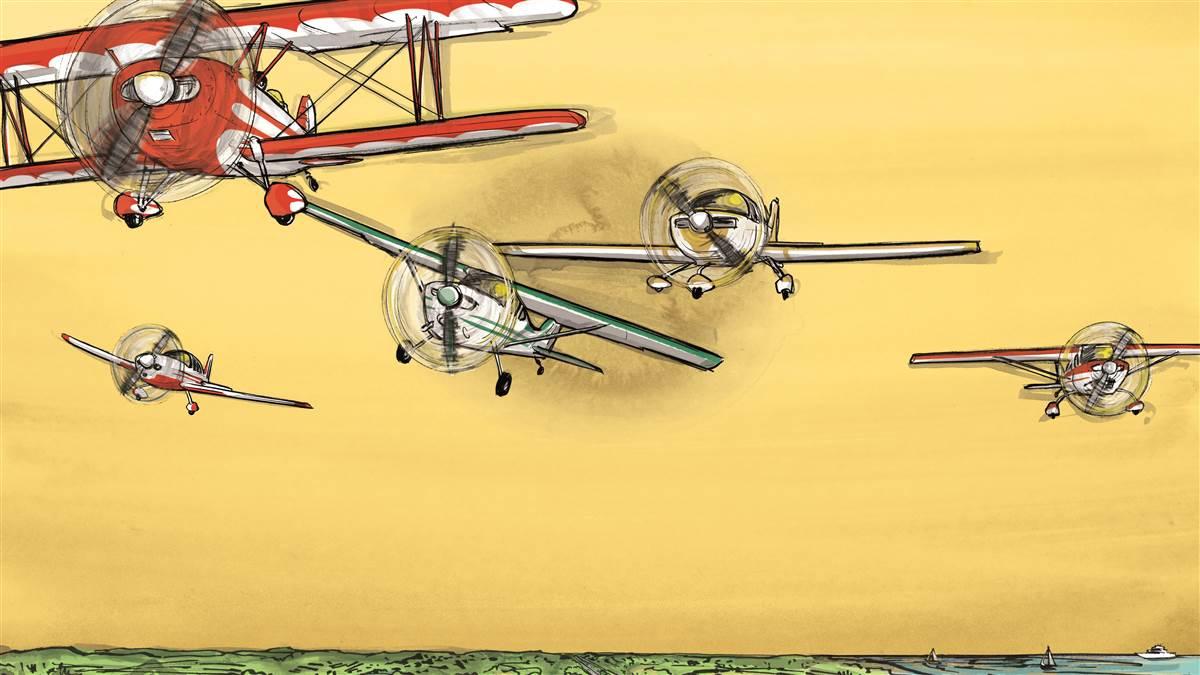 Leading the flight is a highly experienced airline transport pilot-rated CFII in a Great Lakes biplane. At least two other airline transport pilots with multiple instructor certificates are in the formation, which consists of an alternating mix of high- and low-wing airplanes, each a different model. After a quick briefing, the formation departs: two-element (two-airplane) takeoffs, followed by a single airplane. The pilots rejoin into a V formation, and the flight lead signals to spread out. A spread formation is less taxiing on wingmen: It allows them to cross-check aircraft performance, scan for traffic, and glimpse the countryside. Still, their primary attention must be on station keeping—maintaining proper position on the platform aircraft (the one on which they are flying formation).

The V formation rolls out south, with lead on the point; number two on the left in a low-wing Grumman Tiger; number three on the right, in a high-wing Cessna 170; number four on its right side in a low-wing Grumman Lynx; and number five in a high-wing Super Decathlon on the far left, flying off number two (see below). The flight lead directs the formation to echelon left, meaning all aircraft will line up on a diagonal bearing line to the left of lead. Southbound, in an echelon left formation, the glaring Florida sun will be to the left of the formation, so the wingmen—each staring to the right to fly off the airplane ahead and to the right of them—won’t be squinting into the sun. This is excellent wingman consideration and the kind of move that comes with experience.

The moves are nonstandard and would require either a prebriefing or for the flight lead to be directive and specific airborne. There is no room for doubt in anyone’s mind about how the formation will move.In the cross-under maneuver, number three—an experienced formation pilot, ATP-rated CFII with more than 24,000 flight hours—must move down, then aft, and with nose-to-tail and vertical separation from lead, slide over to the left side of lead, then move up and onto the echelon bearing line. Number four moves with him, and crosses behind and below number three about the time number three crosses behind number one. It’s a basic move, common in formation flying. Based on the experience of the pilots participating in the flight, they would have each moved back and forth, into and out of echelon formation dozens of times. A mix of high- and low-wing aircraft in an unusual five-airplane formation made the somewhat routine move more complicated. Moving from V to echelon from a wider spread formation is also unusual and complicates the move further. Most formation moves are executed from close formation.

While moving his airplane from V to echelon, number three—upward visibility limited by his Cessna 170’s high wing—collides with number two, an ATP-rated CFII in a low-wing Grumman. Both airplanes immediately depart controlled flight; both pilots are killed upon ground impact.

The midair collision illustrates just how quickly formation flying can turn tragic. This flight was part of a routine event loosely orchestrated by Gaggle Flight Formation Group, an informal group fashioned on the airpark to coordinate formation flights and set basic expectations and parameters. Pilots would gather around an oak tree on Saturday mornings, and, depending upon who showed up, they’d match airplanes and experience levels, assign formations, brief the flight, and then launch.

The cause of the accident seems simple. Number three failed to clear his flight path and rammed number two, who was focused on her flight lead and never saw the danger developing. But how could such a basic error occur? Why did number three—a high-time pilot, experienced flying formation in his airplane, and well aware of the limited upward visibility in his high-wing 170—ram a wingman during what should have been a routine formation maneuver? It seems likely there is more to this accident. Dismissing it without a greater probe risks overlooking some deeper learning. 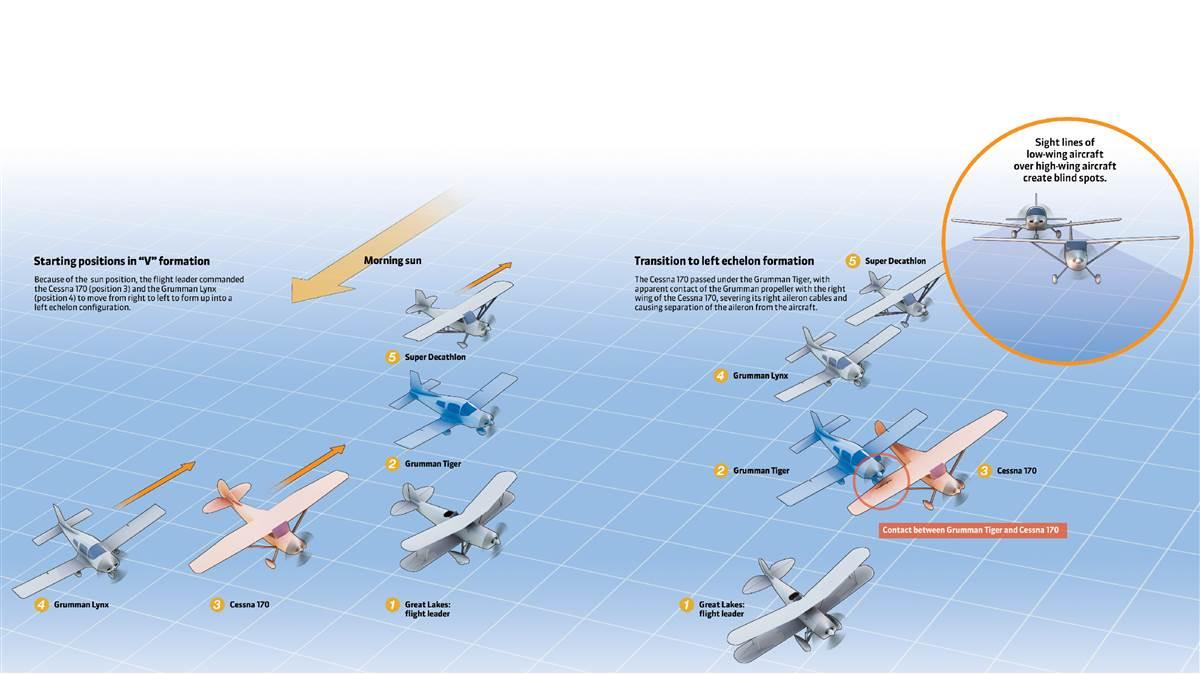 In a five-airplane formation, the transition to echelon could have been accomplished by numbers three and four staying together and sliding to the back of the formation, by numbers two and five splitting so that numbers three and four could move in between them and keep the flight in numerical order, or by number two sliding aft with five so that number three could slide his element next to lead. Whatever the plan, it should have been thoroughly briefed (click on image to enlarge).
Illustration by Charles Floyd

It seems obvious: You must keep the airplane you’re flying formation on in sight—and if you don’t, you call it on the radio and move away (break out). Yet in the moment, in fluid formation maneuvering, a loss of sight can be rationalized. You think that you instinctively understand where the other airplane is and that you’ll regain sight momentarily. The embarrassing situation of having to call blind on an airplane you’re just feet away from can add to delayed action. Many formation accidents have happened from pilots rationalizing a loss of sight, being reluctant to call it in hopes of regaining the visual quickly, and in the interim colliding with a formation partner.

Formation demands discipline. Pilots must call when losing sight, maneuver to ensure separation, and work to regain visual contact—not most of the time, every time. Regardless of some complicating factors, number three had an obligation to confirm visual contact with number two and clear his flight path. Why didn’t he? Flying with a mix of high- and low-wing airplanes with differing performance parameters would have made the formation cumbersome to lead and challenging to fly on the wing. It can be difficult for high- and low-wing airplanes to maintain the same bearing line in echelon because of the limited upward visibility in a high-wing airplane. High-wing Cessnas are especially difficult to fly in formation. The straight, long wing and struts block high, forward visibility and with even minor deviations in position, pilots can easily lose sight of the aircraft they’re flying off of, even in close formation.

This flight warranted an extensive briefing on positions, limitations, and precautions. From statements in the NTSB docket, it does not appear the flight lead conducted such a briefing.

Five-airplane formations are nonstandard. Most organizations that structure formation flying build formations off of pairs (elements). A six-airplane formation is easier to coordinate and easier to lead than a five-airplane formation. The ability to break off flights in pairs, each with a flight lead and a wingman, simplifies orchestration. Extra thought and extra briefing about how a five-airplane formation will operate is required. The move to echelon offers a good example of the added complexity. In this formation, were numbers three and four expected to maintain element integrity (stay together) and establish the echelon by sliding to the very back of the formation—behind and to the left of number five? Or was the expectation that number two and number five would split so that numbers three and four could move in between them in order to keep the flight in numerical order? Did number three expect number two to slide aft with number five so that number three could slide his element next to lead? Did the flight have a shared expectation of the move and how they would align? Was it briefed, or barring a briefing was the flight lead directive and specific enough in the air? None of these briefings seem to have been accomplished.

Number three was experienced in flying formation and would have been familiar with upward visibility constraints because of the 170’s high wing. It’s hard to understand him just plowing up into position and hoping to miss number two. It becomes more explicable if number three had different expectations on number two’s position in the echelon.

Perhaps the move to echelon from a wider (spread) formation was a contributing factor. Spread formations have a larger window of acceptable position, which is why formation changes are typically made from close formation. There’s more predictability in the position of fellow wingmen in close. Perhaps number two was within acceptable parameters for a spread formation, but wider than number three expected. Three may have justified his lack of visual contact with number two by thinking she was in closer than she actually was.

Any of the position options for moving a five-airplane from V to echelon are acceptable. Even doing so from a wider, spread formation is acceptable, but the moves are nonstandard and would require either a prebriefing or for the flight lead to be directive and specific airborne. There is no room for doubt in anyone’s mind about how the formation will move. It seems likely this flight did not have a shared vision of either their lineup or their spacing.

Good formation briefings feed predictability, which is so critical to safe formation flying. Everyone must be able to predict the actions of the person next to them, and thus the actions of the entire flight. Did the decades of success for Gaggle Flight Formation Group and the Saturday morning routine lead to complacency? It seems likely. Statements from participants that morning indicate the flight was not thoroughly briefed. A proper briefing would have included emphasis on important nonstandard factors such as the mix of high- and low-wing airplanes and the nuances of a five-airplane formation.

This Florida midair collision reinforces critical lessons learned for formation flying. Disciplined adherence to standards is imperative on every flight, in every maneuver, every time. A one-time mistake can be costly. The discipline to call blind in the somewhat embarrassing situation of losing sight of the airplane you’re crossing under is an example. The discipline to adequately brief and prepare the flight is another. A lot of thought and preparation is needed to analyze situations and think through the challenges and the nuances of the flight, especially when they are unusual or nonstandard.

A formation moves as a unit. Predictability is key. Shared expectations are important and all of that is set in the tone and thoroughness of the flight briefing.