Get the app Get the app
Get the latest news on coronavirus impacts on general aviation, including what AOPA is doing to protect GA, event cancellations, advice for pilots to protect themselves, and more. Read More
Already a member? Please login below for an enhanced experience. Not a member? Join today
News & Media AOPA Sweepstakes: Get your gear

Ice fishing on a frozen lake or gliding through fresh powder in a field are some of the wintery adventures AOPA’s Sweepstakes Super Cub can carry the lucky winner to because the aircraft will come with hydraulic skis in addition to tundra tires and amphibious floats. 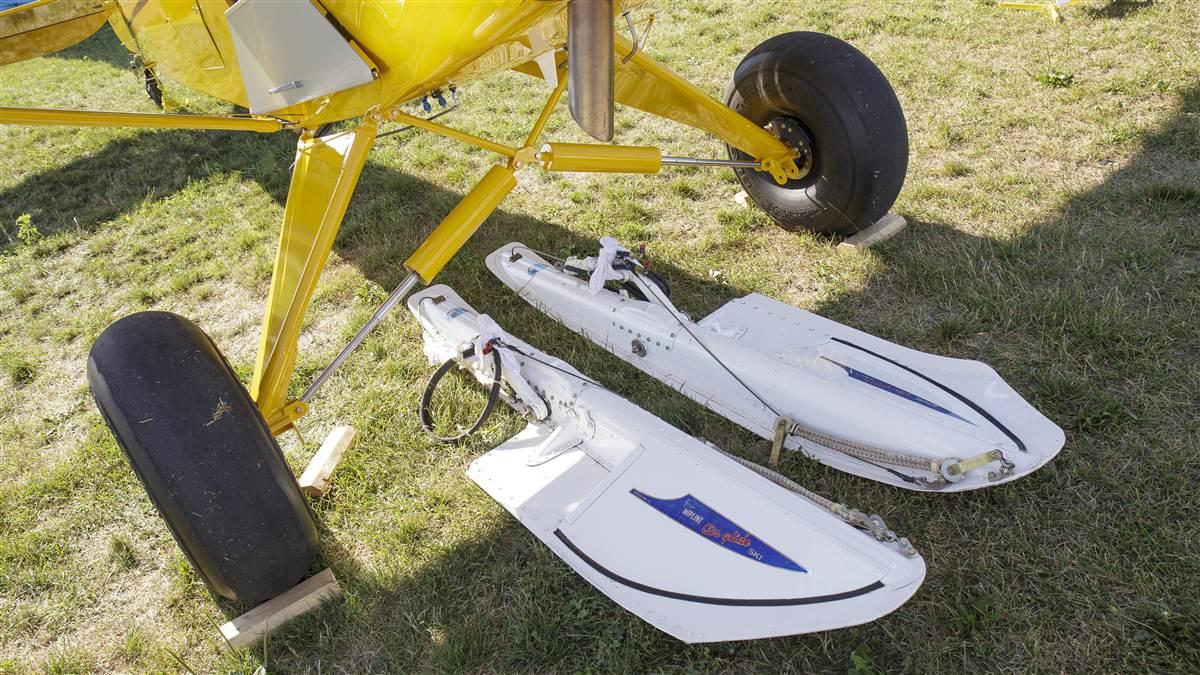 The AOPA Sweepstakes Super Cub is no stranger to ski flying. Bill Allison, a Montana rancher who owned and flew the Super Cub in the 1990s, equipped it with skis during the winter so he could continue to survey his property from the air.

The convenience and versatility of the hydraulic Wipaire Wipline AirGlide Skis (pictured above) will take the headache out of winter jaunts that can arise with straight skis—no worrying about whether you’ll have to carry fuel to your airplane because you landed in the snow next to the runway but can’t taxi over the plowed ramp to the fuel farm. With hydraulic skis, you can operate on snow, ice, or dry land. If you are based at an airport, take off with the skis retracted and then extend them to land on a frozen lake or snowy field. Retract them again before landing at your home airport.

Raising and lowering the skis around the tires is a cinch. The gear is electrically actuated by a gear position handle (also used for the amphibious floats) mounted in the panel, saving you the in-cockpit workout of pumping them up and down manually (although an emergency gear hand pump is also installed).

Because the skis rotate down under the tires, landings will be softer than they would be on straight skis mounted directly to the axles, according to Sweepstakes Super Cub restorer Roger Meggers. “You have a cushion effect,” he said. Combine that with the Alpha and Omega Suspension System from Burl’s Aircraft, and touchdowns could be as light as landing on tundra tires. (The suspension system has been put through its paces on numerous aircraft in Alaska, including during temperatures as cold as minus 40 degrees Fahrenheit.) The suspension and shock absorption is particularly important to save wear on the airframe when operating skis on rough terrain.

A plastic coating over the aluminum skis helps to protect them from rock damage, and, as Meggers pointed out, it’s cheaper to replace the plastic than repair the aluminum. In addition, the plastic won’t freeze as quickly to the ground, he said, which is a good thing if you want to land on a lake or in a field and hop out for a bit.