Get the app Get the app
News & Media Drones deliver pollen, better fruit Dropcopter CEO Matt Koball loads pollen into one of the firm's hexacopters. Photo by Kevin Foresti courtesy of Dropcopter.

The Syracuse startup has fielded a fleet of six custom-built hexacopters and worked their magic on apple, cherry, and almond orchards in California and New York with verified success.

Adam Fine, co-founder of Dropcopter, and Chief Marketing Officer Mike Winch have beat bees at their game by removing many of the variables and uncertainties that come with using unguided insects to pollinate blooms. The buzzing of bees in their clients’ orchards has been replaced with the whir of drone blades flying a preprogrammed, precision path 10 feet above tree canopies.

Dropcopter's pitch includes significant increases in yields, based on three years of trial runs that produced 25- to 50-percent increases in orchards pollinated by drones, according to the company website. This precision pollination can boost a variety of crops that have for generations depended on the work of bees, including apples and almonds.

For those who can’t quite remember their grade-school lessons on stamens and stigmas and how bees fit in, it breaks down like this: Flowers that bloom and bear fruit need pollen to pass from the male to female parts of the bloom. Bees, in their quest for nectar to take back to the hive, become pollen-laden couriers. As they visit other flowers, the pollen rubs off and the fertilized flower is on its way. Traditionally, a grower has to pay to truck bees in and keep them on site at an orchard for as long as two to three weeks. But bees have their own agenda, visiting only the blooms they are interested in, not necessarily those that might have the most market potential.

Bees don’t fly at night or when it’s too cold, which just might be the best time to pollinate a boom. In other words, insects make their own go/no-go decisions. 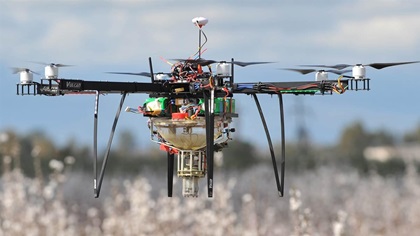 Dropcopter’s solution involves using a unique electrostatic device under the drone to charge pollen grains as they are dispersed. The positively charged pollen is drawn to the grounded, moist blooms, also assisted by the downwash from the drone’s rotors.

Timing and altitude are critical, according to Fine. The results of precision pollination are not only greater yields, but superior fruit.

Without straying too far from the core of this drone tale, the larger, better-colored apples come from king blooms, the first blooms to open. Pollinating them at exactly the right time, and then netting the trees to prevent further pollination of other, later-opening blooms by local bees, the king blooms receive most of the tree’s energy. The result is the very best, and more valuable apples. Typically, these are double the value at market.

The benefits of this precise timing include reducing labor costs associated with thinning less valuable apples and being able to harvest once rather than multiple times. This in turn can translate into quicker speed-to-market for a grower. Says Winch, “We’re all about getting pollen to exactly the right place at exactly the right time.”

An independent study of apple king blooms that received Dropcopter’s services found a 30-percent increase in the value per acre. Fine and Winch stress that, even after they provide their service, there are variables that ultimately determine the quality and volume of yield. Farmers have to do everything right. Then, of course, Mother Nature plays her hand whenever she pleases, in terms of frosts and other weather variables.

Part of Dropcopter’s success depends on the pollen release from the drone occurring 10 feet above the orchard canopy. Not nine, not 11. That is one of the lessons learned in the three years the company has been testing its solution. Since many orchards in the New York area are not on level ground, relying on GPS and/or a barometer would not deliver sufficiently accurate altitude guidance. Part of Dropcopter’s custom software solution involves having the ability not only to preview orchards and program precise flight paths, but also to provide more discriminating terrain mapping and altitude control. The exact way the software accomplishes this is being kept close to the vest as of now.

The hexacopters can pollinate 30 to 40 acres an hour, which begs the first question drone enthusiasts often ask: How long can the drone fly? Fine stresses that safety is a prime concern, so they don’t push the batteries. They limit flights to 25 to 30 minutes, and take plenty of spare batteries to the field. Missions are programmed with that in mind. While the drone does indeed fly a programmed route, a certificated remote pilot is still present and responsible at all times in case manual intervention is needed.

The FAA regulates agricultural aircraft under Part 137, and the exemption needed to enable Dropcopter to spread pollen in orchards in New York and beyond required several months of work, including holding many meetings, writing manuals, reviewing aircraft, developing procedures from scratch, and doing what one might imagine to satisfy the FAA. Fine was quick to praise the Rochester Flight Standards District Office inspector who worked with them on obtaining the exemption. It didn’t hurt that the inspector was also a certificated remote pilot.

“They have been very helpful. What we were afraid was going to be an almost unworkable process turned into a good, educational experience to work with the FAA on,” Fine said.

As demand for their service increases, Winch says producing more drones will naturally follow, and would not be time consuming since the parts are commercially available and their vendor knows the drill for these customized rigs. But every mission needs a pilot, so part of growth would involve enlisting more qualified remote pilots.

Fine adds that Part 107 operators who already do crop monitoring for growers are logical pilots for Dropcopter to work with. The company has added 12 clients in the past year, and 2019 will be focused on expanding the ranks of growers who call on their mechanical pollinators.

Sales campaigns on both coasts and attendance at agricultural events are part of the strategy.

At a time when we frequently hear of entrepreneurial drone aspirations ranging from delivering packages and moving people to missions that seem impractical or far-fetched, it appears that Dropcopter has demonstrated its approach to crop pollination is paying off and is a perfect utility niche for a drone. How about them apples?

Zach Ryall of Austin, Texas, satisfies his passion for aviation between a Mooney M20E and his DJI Phantom 4 Pro. An instrument-rated private pilot and certificated remote pilot, Ryall retired from a 41-year career as a photojournalist and media manager.
Go to Zach Ryall's Profile
Topics: Drone, Technology