Get the app Get the app
Already a member? Please login below for an enhanced experience. Not a member? Join today
News & Media Rosemary Mariner was first female US Navy fighter pilot 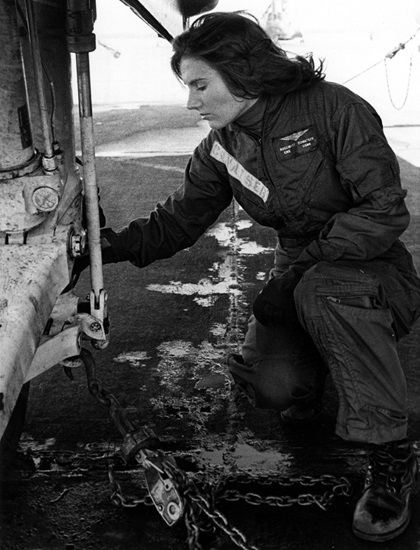 Mariner’s aviation fascination began when she was a child as she watched aircraft leaving and returning to San Diego’s Miramar Naval Air Station. Her love of aviation led her to flight lessons, which she paid for by washing aircraft.

Mariner served from 1973 to 1997, and “had a career full of firsts,” the U.S. Naval Institute noted. She was the first female fighter pilot to fly Douglas A–4C and LTV A–7E Corsair II attack aircraft for the Navy. During 1990’s Operation Desert Shield response to Iraq’s invasion of Kuwait, Mariner was credited as the first woman to command an operational air squadron.

She logged more than 3,500 flight hours in 15 types of aircraft during her 24 years of military service, Stars and Stripes reported.

The pioneering aviator will be honored during her Feb. 2 funeral in Maynardville, Tennessee, with the Navy’s first ever “all-female flyover,” the military service announced. Pilots from Naval Air Station Oceana will be flying F/A–18E/F Super Hornets in a traditional missing man formation.

Mariner held an aeronautics degree from Purdue University and a master’s from National War College. After retiring from military service, she taught military history classes at the University of Tennessee. She also served as an advisor on national defense policy and women's integration into the military for ABC News, PBS, and the Navy, a legacy.com obituary noted. Her father was a U.S. Air Force pilot, and her husband is a retired Navy commander.

During a National Public Radio interview, Mariner credited African-American servicemen as her military role models because they “led the vanguard in integration” for the armed forces.

Southwest Airlines Capt. Tammie Jo Shults, who flew a crippled passenger jet airliner to safety in 2018, also served with Mariner in the Navy and was a friend “for 30 years,” she told NPR’s Morning Edition. Shults was an executive officer in Mariner’s Tactical Electronic Warfare Squadron Thirty-Four (VAQ-34) during Operation Desert Storm and said the ground-breaking aviator “was a champion of people—not of women—of people.”

She recalled that Mariner’s accomplishments “caused huge ripples of effect” in the military. “Everywhere Rosemary went in Naval aviation, she was the first to do that—the first to fly jets, the first to have command of a squadron.” Shults said her friend Mariner was "more than a first. She was an original.”