Get the app Get the app
Already a member? Please login below for an enhanced experience. Not a member? Join today
News & Videos Never Again: Jumpers away

Snagged on the ground by a parachute

On a beautiful August morning in middle Tennessee, we decided to visit one of the nearby airport pancake breakfasts. Our airplane, a 1967 Cherokee 140, had completed a successful annual just a few weeks prior. 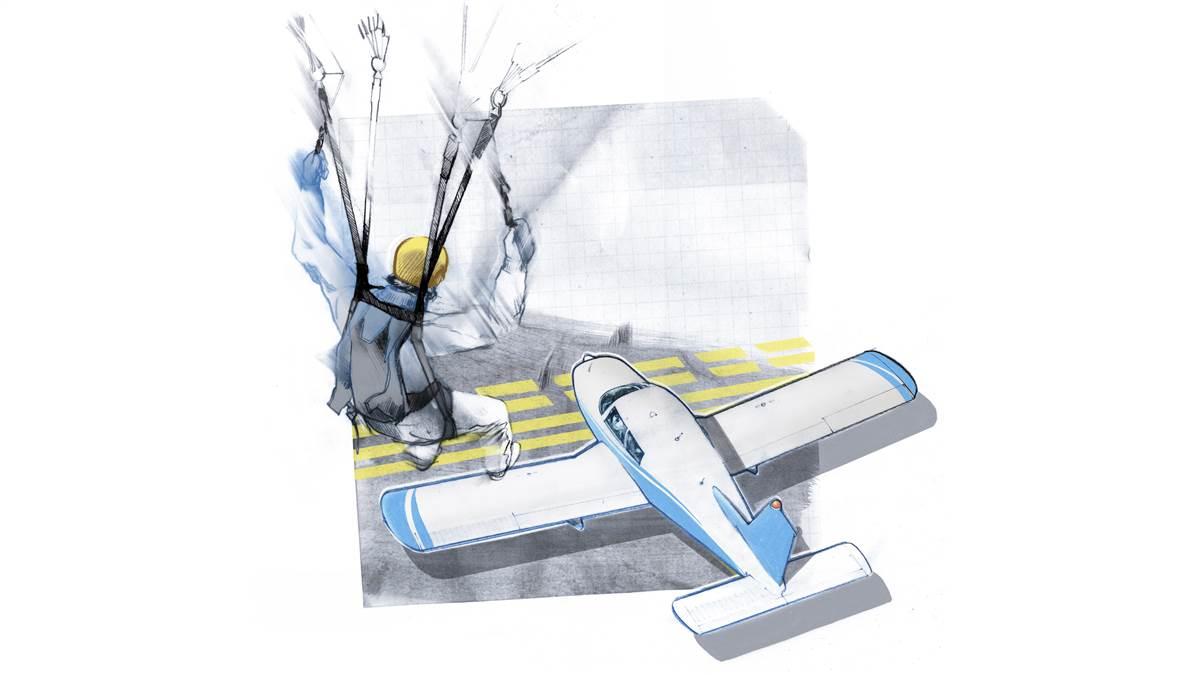 Hear this and other original “Never Again” stories as podcasts every month on iTunes.

“Never Again” is presented to enhance safety by providing a forum for pilots to learn from each others’ experiences. Email “Never Again” submissions to [email protected].

An early start would help avoid the heat and humidity that was sure to be prevalent as the day progressed. My co-owner Steve and I met at Tullahoma Regional Airport (THA) to fly to Guntersville Municipal Airport (8A1) in Alabama—about a 40-minute flight in our speedster. The weather at Tullahoma was severe clear, but there were visibility issues at Guntersville. The Guntersville airport is located by a lake—so close, in fact, it has a water runway in addition to an asphalt one. We decided we would head in that direction in hopes that the fog would move out by the time we arrived. If that didn’t work out, we still would have had a fun day of flying.

The Tullahoma airport is a busy place on most weekends. It’s common to see skydivers, gliders, helicopter operations, and other general aviation activity successfully sharing the airspace. After the preflight, I checked the tetrahedron, and, although the wind was minimal, it was pointing to the north. I heard a distant Beech Baron entering the area with intentions to land on Runway 36, so I taxied out to do the runup.

I heard the Baron entering downwind for Runway 36, and I heard the skydivers’ jump plane pilot announce, “Jumpers away.” The jumpers land in a large grassy area around the middle of the field. The local pilots know to avoid crossing midfield to avoid what we not so affectionately call “meat bombs.”

I taxied short of the runway hold line and angled the airplane about 45 degrees into the wind. I completed the pretakeoff checklist, pulled the power back to 1,000 rpm, and stared out the left window, looking for the Baron pilot who had just called final.

Suddenly, our airplane shuddered, and the engine was stopping. My first thought was that someone taxied into us from behind. As I looked out front, my heart sank, and I remember saying, “Oh no.”

There was the silky material of a parachute draped over the propeller as it was slowly rotating to a stop. I thought someone had just died or had been seriously maimed. Steve opened the door as I turned off the magnetos and master switch. I heard him talking to someone on the ground, and I thought, That’s a good sign.

The skydiver was a young woman, about 20 years of age, and she was asking if our airplane was OK. Steve told her not to worry about the airplane right now and asked if she was OK. By this time, I was getting out of the airplane and saw no signs of blood, and the skydiver was trying to get to her feet. We insisted she sit on the ground for a while. She looked to be in shock, and who wouldn’t be?

The skydiving ground crew soon showed up and assisted the jumper back to the hangar. Miraculously, she had no physical injuries. This was one of her early solo jumps, and according to other skydivers she had fixated on the Cherokee and landed right at it, like a moth to a flame. She had landed just feet away from a moving propeller and was unscathed. Had she landed a minute earlier when I was performing the runup at a higher rpm, it could have pulled her into the propeller instead of killing our idling engine.

Steve and I got back in the Cherokee and started it up. We ran the power up to check for any unusual vibrations and having found none we had just about decided to take it around the pattern when someone called over the radio and told us there was an airworthiness directive that prohibits flight after a sudden engine stoppage until the engine could be torn down and inspected (TDI). We taxied back in and talked to the drop zone manager who assured us that as a member of the United States Parachute Association (USPA), the jumper had insurance that would pay for the TDI.

Our next conundrum was figuring out who we needed to report this to. There was no structural damage and the aircraft was not moving at the time of the accident. It did not fit in the FAA definition of an accident, but surely, we should tell someone.

We decided to contact the Nashville Flight Standards District Office, and after a few days they asked for more detailed information. We each gave our account of the day, and after a week or so they wrote back and said they were going to classify it as an “occurrence” and no more information would be required from us.

Meanwhile, the woman jumped again the next day with better results. The USPA insurance was very helpful and there was no hassle getting them to pay. We opted to go ahead and do an overhaul at our expense since the engine was only 250 hours from TBO.

After this episode I will be more careful when I hear the call “jumpers away over Tullahoma,” whether on the ground or in the air. Experience with the jumpers had given me a false sense that they were not a factor in routine operations at the airport, but I will be more paranoid in the future. The jumper missed her landing area by about a half mile—with plenty of room to the left or right of us—but somehow, she ended up just feet from our propeller. Never again would this happen—or could it?

David Hensley is a private pilot who lives in Tullahoma, Tennessee.