Get the app Get the app
Get the latest news on coronavirus impacts on general aviation, including what AOPA is doing to protect GA, event cancellations, advice for pilots to protect themselves, and more. Read More
Already a member? Please login below for an enhanced experience. Not a member? Join today
News & Videos On eagles wings

In the mountains of Montana, young cancer survivors triumph through flight 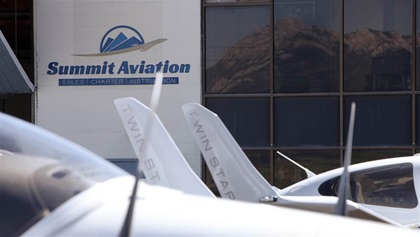 Summit Aviation was named an AOPA Outstanding Flight School in 2012. The first year of the Flight Training Experience Survey identified Summit as one of the top five in the nation. That’s a long way from an office in a hangar closet office in 2001 when Ben Walton was the only instructor in a rented Cessna 150. He put up flyers around Bozeman announcing his one-man operation and 25 students showed up. He offered to teach a class at Montana State University and his number of students continued to grow. Soon he was part of a two-year aviation program in a division of MSU and by 2005, it had so many students it had to be capped at 80. Today, Summit Aviation trains some 300 students per year and has been an FAR Part 141 certificated operation since 2007. Walton employs 20 instructors.

Summit’s training fleet consists of mostly Diamond Aircraft—eight DA20s, two DA40s, and three DA42s—as well as two Cessna 172s and a Decathlon. “At first I thought they looked dumb,” Walton said of the Diamonds. “But they fly like an airplane should fly, use half the fuel, have a great safety record, and are fun. Now I think they are so sleek, and students—especially the Survivor Camp participants—love them.”

Summit also has a charter fleet with two Phenom 300s and a Hawker 850. It is also one of the largest aircraft sellers in the Northwest. —JSW

Summit Aviation partners with local businesses and individuals to raise the $12,000 needed to sponsor four young cancer survivors each summer at the Eagle Mount Annual Cancer Survivor Flight Camp. For more information or to donate, visit the website or visit the fundraising page.

But when you’re 25, fresh out of college, and ready to attack your future, you can’t imagine it would be you. That is, however, what had happened to Graham Tredwell, a self-professed ski bum who, in summer 2018, was living in his van by a river near Silverton, Colorado, skiing by day and working at a sandwich shop at night. He was diagnosed with Hodgkins lymphoma in 2016 and spent nearly a year in treatment trying to get well. His mom sat by his side and read to him, and his dad flew in to help care for him, too. His dad, a pilot for American Airlines, had never been able to get his adventurous son to consider flight training. But eight months in bed when you’re a young man gives you too much time to reconsider your choices and, after exorcising his trauma from the cancer through skiing and hanging out, the ski bum decided he wanted to fly.

“It was pretty spontaneous,” Tredwell said. “I saw this opportunity on Thursday, quit my job, got in my van, and arrived here on Saturday.”

“Here” is Summit Aviation, a flight school nestled in Big Sky Country, at the base of the Bridgers Mountains, outside Bozeman, Montana, in Belgrade. It’s owned by an intrepid adventurer not unlike Tredwell. When Ben Walton graduated from Indiana State in 1999 with his professional pilot certificates, he got in his van and drove to Jackson Hole, Wyoming. He lived in his van in the national forest and attempted to drum up students to teach to fly. He eventually wound up in Bozeman, and—from a closet in a friend’s hangar—started teaching. Summit Aviation now has 15 aircraft and 20 instructors (see “Summit’s Success,” sidebar).

Along his journey Walton met and married his wife, Rachel, and cancer reached out and touched them, too. Walton’s mother died of lung cancer and his sister-in-law, Heather, had colon cancer. She was just 28 years old and since the treatment was so expensive, Ben and Rachel searched for ways to help. He organized a “Touch-and-go-athon” to raise money for her treatment.

“It was our first humanitarian thing,” he said. “I didn’t know anything about nonprofits and helping others.” Heather died of her cancer at 34 in 2005. His mother died in 2015. “Her diagnosis and battle were a big part of my inspiration for this program,” Walton said.

A friend told him about a camp for cancer survivors that took the patients kayaking and on other outdoor adventures. Walton said he looked around and thought we have something special here, and he wanted to share it with those affected by cancer. Working with Eagle Mount, a charitable organization established in 1982 to help children with disabilities and cancer, Walton started the Big Sky Kids Cancer Survivor’s Camp in 2014. Every summer, Eagle Mount identifies four young adults who have overcome the disease and brings them to Summit to experience flying in some of the most beautiful vistas in the world.

“Over the course of a week, our campers are transformed from passengers to pilots—learning how to fly airplanes, performing their own takeoffs and landings, and experiencing the thrill of cross-country flight over Yellowstone National Park,” said Jen Nunes, project manager. “The transformation these individuals go through is amazing. For some, it’s a chance at an incredible experience after stolen opportunities; for others, it’s about removing limitations and revealing new skills and abilities.”

Tredwell had applied for the 2018 camp but didn’t get in. However, two days before the camp started he was told another camper had to drop out. Would he be willing to come?

Cruising along at 150 mph at 10,000 feet msl, a singing voice comes over the intercom. “Country roads, take me home,” a warbly voice intones and chatter erupts on the radio. Some are complimenting the singer, others are good-naturedly ribbing him. It’s 19-year-old Brett Walund—call sign “Rocket Man”—one of the four 2018 summer campers who are ending their week at the survivor camp by flying in formation through Yellowstone National Park.

“The Big Sky Kids Camp was one of the greatest events I’ve had the privilege to participate in. We are able to share our love of flight with some very deserving campers and create an amazing adventure for them.”           —CFI Bradley Groesbeck“Look at that geyser erupting down there!” points out CFI Bradley Groesbeck, flying in a Diamond DA42 with camper Darla Brown. “Look at how many are blowing up. I’ve never seen that many at once.”

“It’s the end of the world as we know it,” says Tredwell, from his DA42 with instructor Austin Larson.

“No better place to be if this is the end,” says Walund.

Each of the participants had a call sign: Tredwell was “Hot Rod Lincoln” because he drove the courtesy car, a Lincoln, after the group’s first flight to Helena; Emily Kuhn, a 17-year-old from Pana, Illinois, was dubbed “First Lady;” and Brown, 30, of Vidor, Texas, was “Daisy.”

“Brett was singing Rocket Man by Elton John on the flight to Helena. He’s fearless,” said CFI Evan Schwarzenback. “His disability doesn’t stop his confidence; he’s singing over the radio—I would never sing over the radio!”

Walund has battled cancer from an early age and does not have full use of the right side of his body. He also struggles to speak. He’s from nearby Anaconda, Montana, and his proudest moment during the camp experience was to pilot a Diamond DA40 with Walton to his home airport and meet up with his parents.

The camaraderie that has built between these students and their instructors during the week has reached a crescendo of affection and admiration. Eight very different young individuals who probably would never meet or become friends under other circumstances are bonded by this experience. Walton says the instructors get as much from the week-long camp as do the campers themselves.

Walton employs some 20 instructors. Those who work at the camp write in essays to Walton to show why they want to participate.

“Every one [of the instructors] wants to volunteer each summer,” he said. “The bond is extreme between CFI and student. They really build a tight bond. I think there’s almost more of an impact on the instructors’ lives from this experience,” Walton said.

“The Big Sky Kids Camp was one of the greatest events I’ve had the privilege to participate in. We are able to share our love of flight to some very deserving campers and create an amazing adventure for them,” said Groesbeck.

“I’ve never met anyone like these kids,” Walton said. “Because of what they’ve been through, they didn’t get to be a kid. Flying an airplane is like being a kid. Life’s short. It’s important to do things that are meaningful.”

Walton’s goal is not to gather flight students for his school but to introduce the campers to flying and show them the beauty of the world aloft. “We help provide a path for them,” he said. “We just want to help them succeed.”

Tredwell has stayed in Bozeman and is taking flight instruction at Summit Aviation. He’s working through issues regarding his medical certificate. “I had to send in a written statement from my oncologist explaining that I am in remission and what my medical plan looked like,” he said.

“The FAA is waiting on a medical review of my paperwork, which could take some time before my AME can clear me. It’s concerning because I am approaching my first solo. I have faith that everything will work out. It’s the waiting that is difficult. And I’ve decided—the end goal is to go all the way to commercial.”

Most of the other campers over the years do not pursue their certificates, but all remember the experience.

“It was outrageously fun,” said a previous camper. “I had this feeling like we had won. We had, in some way, triumphed—went from cancer to flying.”