Get the app Get the app
Get the latest news on coronavirus impacts on general aviation, including what AOPA is doing to protect GA, event cancellations, advice for pilots to protect themselves, and more. Read More
Already a member? Please login below for an enhanced experience. Not a member? Join today
News & Media Proficiency: Helicopters and ice

Icing has crippled aircraft from large jets to small general aviation aircraft, and has caused thousands of accidents. In the United States there were 583 airframe-icing accidents with more than 800 fatalities for a 19-year period. 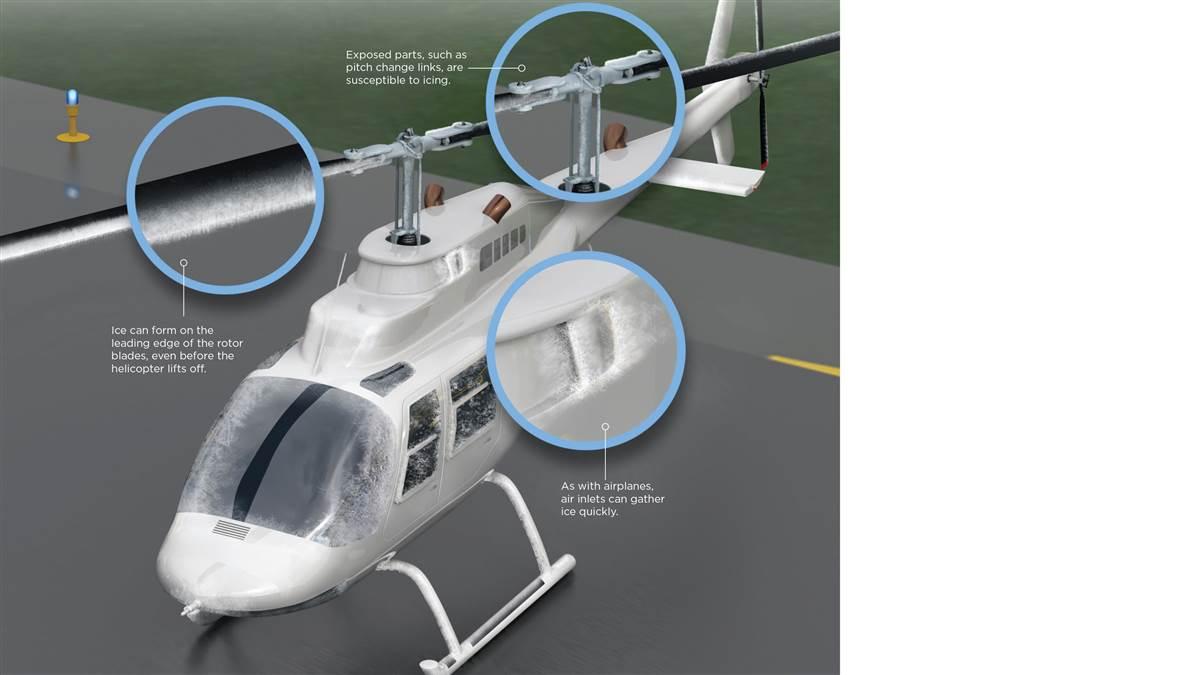 Helicopters are more susceptible to the danger of icing conditions than most other types of aircraft. They are particularly vulnerable because, in addition to rotors with associated exposed flight-control linkage, helicopters generally have more equipment exposed in the airstream. And when an aircraft isn’t built for high speed, it is less likely to have flush rivets, fairings, and smooth door hinges—so more places can give a foothold for ice to start accumulating. Helicopters also lack the climb performance and higher service ceiling of a jet or high-performance airplane, and they are not as capable of climbing out of a bad condition.

As a student pilot, I learned a valuable lesson one wintry day. The fog had dissipated enough to allow a flight lesson, at a little more than one mile of visibility. My instructor decided we could safely do some hover work at the airport, no higher than 10 feet.

As I rolled up the Bell 47’s throttle, it hit the stop and would go no farther. The manifold pressure indicated full power, but the rotor was far below full rpm. The magnetos checked out and carburetor heat didn’t help, so we shut down.

The entire leading edge of each rotor blade had about an inch of ice, making them so aerodynamically inefficient that full rpm at flat pitch wasn’t possible. There had been enough moisture in the air at freezing temperature for ice to accumulate on the rotors, which are essentially wings moving through the air.

Later in my career I learned just pulling an aircraft out of a warm hangar to a freezing ramp could cause problems. A warm aircraft being towed through a snowy ramp area will collect snow over the wheels and skids, which melts on the still-warm aircraft only to freeze on the ramp. This can lock wheel brakes and even freeze a wheel or skid to the ground, presenting a dynamic rollover hazard upon liftoff. When taxiing a wheeled helicopter or airplane, I always avoid puddles of water if taking off into freezing temperatures.

The entire leading edge of each rotor blade had about an inch of ice, making the blades so aerodynamically inefficient that full rpm at flat pitch wasn’t possible.The AIM adds more pragmatic guidance: “A pilot can expect icing when flying in visible precipitation, such as rain or cloud droplets, and the temperature is between plus 2 and minus 10 degrees Celsius.” It has been my experience that an aircraft can accumulate ice down to minus 20 degrees C, so I recommend taking a more conservative route than the AIM, and consider any visible moisture between plus 2 and minus 20 degrees C to be a known and forecast icing condition.

The AIM defines a forecast icing condition as “Environmental conditions expected by a [National Weather Service] or an FAA-approved weather provider to be conducive to the formation of in-flight icing on aircraft.” Several resources can help a pilot to determine if there is a forecast icing condition: icing airmets/sigmets, current and forecast icing products (CIP and FIP), pilot reports, and all other standard weather briefing charts and products. A pirep should only be used as confirmation that a positive icing condition exists; if a pirep reports negative ice, that doesn’t mean another aircraft won’t encounter it. Different aircraft can react differently to ice accumulation in the same conditions. If unsure and all the charts seem overwhelming, sometimes it’s good to talk to a flight service briefer.

Airframe ice accumulation causes many problems. It adds weight to the aircraft, degrading performance and possibly changing the center of gravity, and creates aerodynamic inefficiencies when adhering to surfaces such as horizontal and vertical stabilizers, and rotor blades.

Accumulating ice also can create flight control issues by adhering to exposed pitch change links and other flight control components, such as the swash plate. It can adhere to engine inlet areas, obstructing necessary airflow and even be ingested by the engine. It can accumulate unevenly on the main and tail rotor blades, creating an unbalanced condition.

Ice can shed unevenly, causing pronounced vibrations; ice slinging off the main rotor can damage the tail rotor and create a hazard on the ground.

Ice on the windscreen can interfere with pilot visibility as well as pitot static instruments. The altimeter, vertical speed, and airspeed indicators may show anomalies, indicating icing in the pitot static systems.

The lower corner of the front windshield, windshield wiper, or outside door hinge are good places to watch for accumulation. During cruise flight, a slow rise in required engine power might mean ice is accumulating on the airframe, increasing the weight of the aircraft, and/or on the rotor blades and creating aerodynamic inefficiency. A rise in engine turbine temperature may indicate ice interfering with the inlet. Low-frequency vibrations in the airframe or cyclic and collective can indicate ice accumulating on the main rotor, creating an unbalanced rotor. A higher-frequency vibration in the pedals can indicate ice accumulating on the tail rotor. Those flying aircraft with track and balance monitoring equipment will be better able to track this.

The thicker the cloud from top to bottom, the more vertical development there will be within that cloud, and the larger the moisture droplet size will be. Larger droplets are a greater hazard in forming ice that will adhere to an aircraft. Clouds with vertical development that are at freezing or just below freezing will have large liquid water content, which can rapidly accumulate on aircraft surfaces, so pilots should be extra vigilant between temperatures of plus 2 and minus 10 degrees C. These clouds will have larger droplet sizes than a thin stratus cloud, with droplets of greater inertia that are more likely to adhere to an aircraft.

Freezing rain droplets are a million times larger than a cloud droplet, and so have a much more serious potential for icing on the aircraft. Freezing rain is where an upper level unstable air mass has generated very large droplet sizes that eventually become so large and heavy they fall through a below-freezing air mass. Supercooled large droplets (SLDs) will then freeze on contact with any unlucky aircraft.

When looking at icing potential charts, forecasts, winds aloft, surface analysis, and prognostic charts, one should have a good idea of cloud bases and tops, as well as temperatures and frontal activity. The pilot should monitor outside air temperature at all times, and note cloud bases and tops during climbs and descents. Before you launch, have several plans to modify course and altitude in the event icing is encountered. Monitoring temperatures at different altitudes throughout the flight, as well as cloud bases and tops, provides a pilot with situational awareness should icing be encountered and means of escape becomes necessary.

Situational awareness and knowing the big picture are important on any flight, but they are even more critical in potential icing conditions, especially when flying IFR. During VFR flight a helicopter usually has the option of landing more expeditiously, without having to take the time to fly instrument procedures, even landing off-airport if necessary. There are many times during IFR flight, especially when offshore or over a mountainous environment, where one is committed to a course of action and doesn’t have the advantage of being able to land quickly. Sometimes a longer route, offering better conditions or more options, is better than a shorter flight with greater exposure.

Where icing conditions are concerned, it’s critical to have multiple courses of action available. Don’t worry if plan A doesn’t work; there are plenty more letters in the alphabet.AOPA

Markus Lavenson flies the Sikorsky S–92 and Leonardo Helicopters AW139 over the Gulf of Mexico. 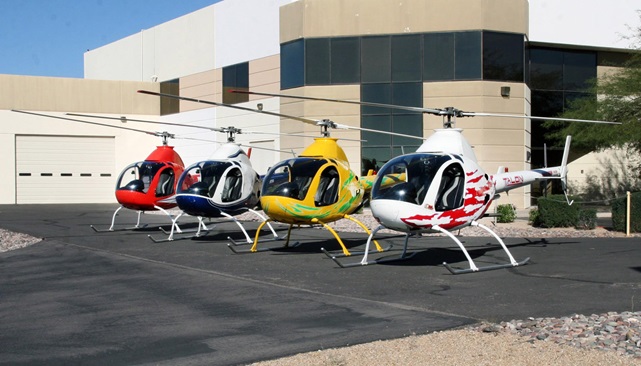