Taking the complexity out of cylinder break-in

From time to time, every piston aircraft owner faces the question of how best to break in new cylinders. Sometimes this involves just one or two newly replaced cylinders. Other times all cylinders have been replaced simultaneously in what is known as a top overhaul, and yet other times the entire engine has been major overhauled or exchanged for a new or rebuilt engine. Regardless, the cylinders must be properly broken in. It’s not hard to break them in, but it’s also not hard to screw up—and that can be a costly and frustrating mistake. 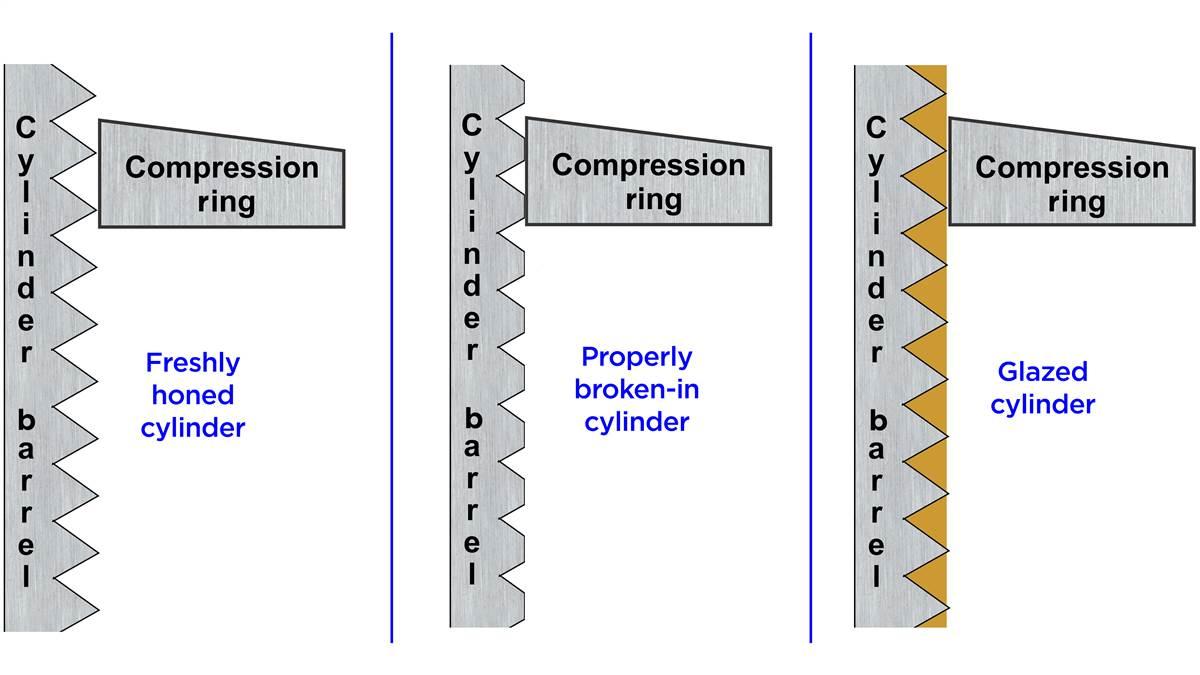 A properly broken-in cylinder has smoothed-off peaks in the cylinder barrel; the valleys between them provide tiny footholds for the oil. Running a freshly honed cylinder at low power for a significant length of time can cause a buildup of carbonized oil, known as glazing.

If you Google “aircraft cylinder break-in” you’ll be amazed at how much has been written on this subject. Each engine manufacturer has a service bulletin to provide guidance on how to do this (e.g., Continental M89-7R1, Lycoming SI 1427B), as do manufacturers of PMA cylinders (ECi, Superior). Many well-known engine overhaul shops provide their own break-in instructions (RAM, Penn Yan, Victor), and various type clubs have also weighed in on the subject. Even Shell Oil has written its own break-in recommendations.

If you digest this myriad guidance, you’ll probably become seriously confused. There are some common threads of agreement, but many subjects of debate. There’s very little agreement about such basic things as what power settings to use, what kind of oil to use and how soon to change it, and how long the break-in process should take. It’s hard to tell the old wives’ tales from the information that has a sound engineering basis. It’s not nearly as difficult as the literature might make it seem.

How cylinders are made

Most cylinders are manufactured from a forged steel barrel mated with an aluminum alloy head casting. A grooved aluminum alloy piston reciprocates within the steel barrel. A pair of chrome-plated steel compression rings are set into the piston’s topmost grooves to provide a reasonably gas-tight seal between the piston and barrel (thereby creating a viable combustion chamber).

To achieve acceptable cylinder longevity, the piston is equipped with a third slotted ring—known as the oil-control ring—that continually applies and distributes a thin film of lubricating oil on the surface of the barrel. As the piston reciprocates inside the barrel, the compression rings hydroplane on this oil film. This prevents most metal-to-metal contact between the rings and the barrel, minimizing friction and wear—and greatly prolonging the lifespan of the cylinder assembly.

If the story ended there, no cylinder break-in would be necessary. But of course, it doesn’t end there.

The need for break-in

To make the barrel oil-wettable, its surface must be roughened very slightly. This is accomplished by finishing the inside surface of the barrel with a special honing tool that uses very hard, 220-grit stones to create a crosshatch pattern of tiny scratches—a so-called microfinish, because the scratches are typically about 30 microinches (0.000030”) deep. This crosshatch pattern provides just enough surface roughness to make the barrel oil-wettable. 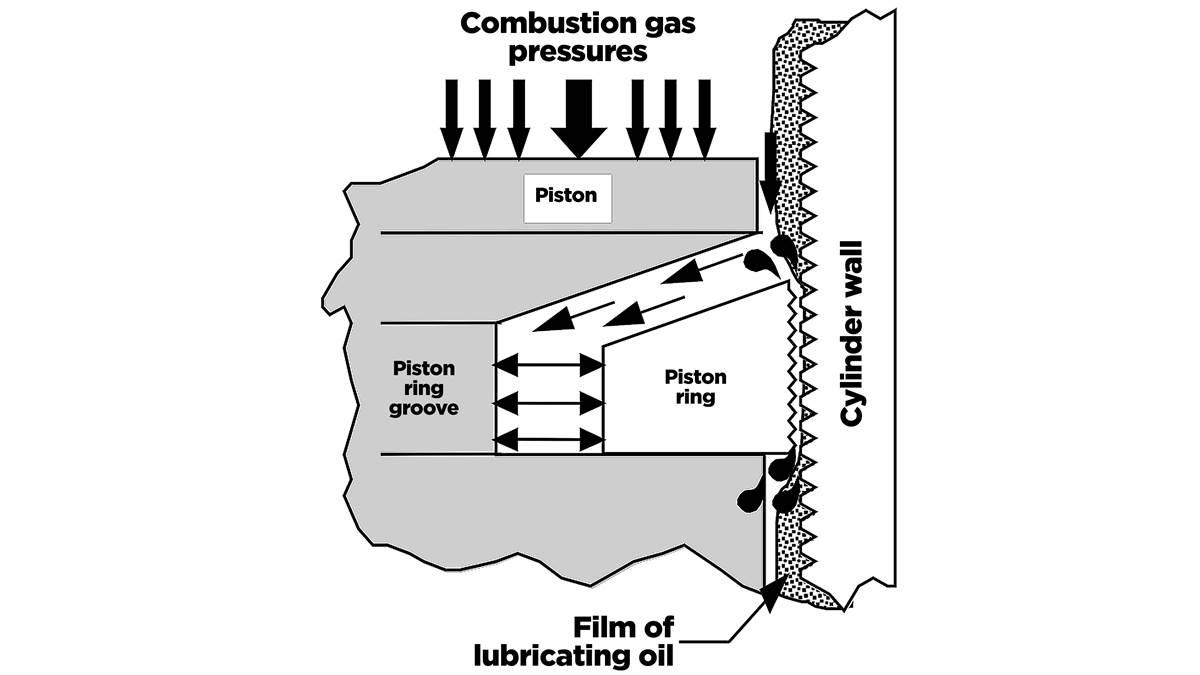 During break-in, pilots should run the engine hard to create greater-than-normal pressure on the compression rings. This forces the rings tightly against the barrel walls, grinding off the sharp peaks while leaving the valleys intact.

If you were to use a microscope to examine the crosshatch pattern on a freshly honed cylinder barrel, you’d see that the hone leaves a series of tiny peaks and valleys. The valleys (fissures) of the microfinish cause the surface to be oil-wettable by providing tiny footholds for the oil to hang onto.

It would be nice if this was done at the factory, and it is, to an extent: Some cylinders are manufactured with a multi-step honing process that partially smooths the sharp peaks. All factory engines, and many field-overhauled ones, go through a run-in period in an engine test cell that starts the break-in process (although this typically does not occur when cylinders are replaced in the field).

Whether the engine is new, rebuilt, overhauled, or simply fitted with one or more replacement cylinders, the final break-in is always up to the pilot who flies the first several post-maintenance flights.

During normal engine operation, the goal is to lubricate the cylinder barrel with an oil film sufficiently strong and thick enough to prevent most metal-to-metal contact between the compression rings and the barrel walls. During break-in, however, the goal is just the opposite: to breach the oil film and cause sufficient metal-to-metal contact to grind off the sharp peaks of the crosshatch while leaving the valleys intact.

To accomplish this, we need to run the engine hard for the first hour or two—hard enough to create greater-than-normal pressure on the compression rings. The semi-trapezoidal design of the compression rings uses combustion chamber pressure to force the rings tightly against the barrel walls. Break-in demands that this pressure be maximized to provide enough force to breach the oil film.

The key to successful cylinder break-in is to run the engine hard during the first few hours of operation.It’s also important to make sure that the oil film isn’t too strong to be breached, so the choice of break-in oil is important. Traditionally, break-in has been done using straight mineral oil that contains no synthetics, ashless dispersants, anti-wear/anti-scuff additives, or viscosity index improvers. In recent years, however, some manufacturers and engine shops have been moving away from using such primitive oil.

Synthetics have higher film strength than petroleum-based oils, which is obviously bad for break-in. Anti-wear/anti-scuff additives also should be avoided, since scuffing is precisely what we’re trying to achieve during break-in. However, I’ve seen no persuasive evidence that ordinary ashless dispersant (AD) oil is any less effective for break-in, and it keeps the engine cleaner, so I prefer to break in on AD oil.

There is some controversy over whether it’s better to use single-weight oil or multigrade oil for break-in. I’ve mostly used Aeroshell W100 for break-in with good success. There’s a moderately persuasive argument that an all-petroleum multigrade oil such as Phillips X/C 20W-50 may be a better choice for break-in oil, and it’s what I used for break-in when the right engine of my Cessna 310 had a major overhaul in 2014 and I did a top overhaul of the left engine.

Run it how hard?

The key to successful cylinder break-in is to run the engine hard during the first few hours of operation, to generate enough pressure on the compression rings to breach the oil film and grind off the sharp peaks. But how hard?

When initially running the engine hard, we need to be careful not to overheat the cylinders and damage the new cylinders. New cylinders will naturally run hotter than normal until the break-in process is largely complete. By far the best way to run the engine hard, but not too hard, is to use an engine monitor that shows the cylinder head temperature of every cylinder.

Here’s what I recommend: Break in the engine by running it as close to maximum continuous power as possible without allowing any CHT to exceed 420 degrees Fahrenheit for Continental cylinders or 440 degrees F for Lycoming cylinders. Run it this hard for an hour or two, until you see the CHT come down noticeably, indicating that the break-in is mostly complete.

It’s very important to run the engine hard right from the outset. Keep ground running to a minimum, avoid a protracted preflight runup, and don’t cycle the propeller more than once (and as shallowly as possible). The reason for all this is that running a freshly honed cylinder at low power for any significant length of time can cause a condition known as glazing, in which a tough residue of carbonized oil builds up on the cylinder walls and stops the break-in process dead in its tracks. Once the cylinder has become glazed, it’s no longer oil-wettable, and the only solution may be to remove and re-hone the cylinder and start the break-in process all over again.

Up to this point, I’ve been discussing break-in of conventional steel-barreled cylinders. There are also two types of electroplated cylinder barrels used in piston aircraft engines: chrome-plated and nickel-plated. Chrome-plated cylinders are extremely hard and durable and utilize a non-honed channeling process to achieve the necessary oil-wettability. Nickel-plated cylinders employ carbide granules embedded in the plating for the same purpose.