Get the app Get the app
News & Media Crew Resource Management: Head in the game

Skills for safe and successful flying

Crew resource management’s key purpose is management of human errors.  CRM has also been called cockpit resource management, and this set of training procedures is finding applications in other industries such as firefighting, health care, and maintenance fields. 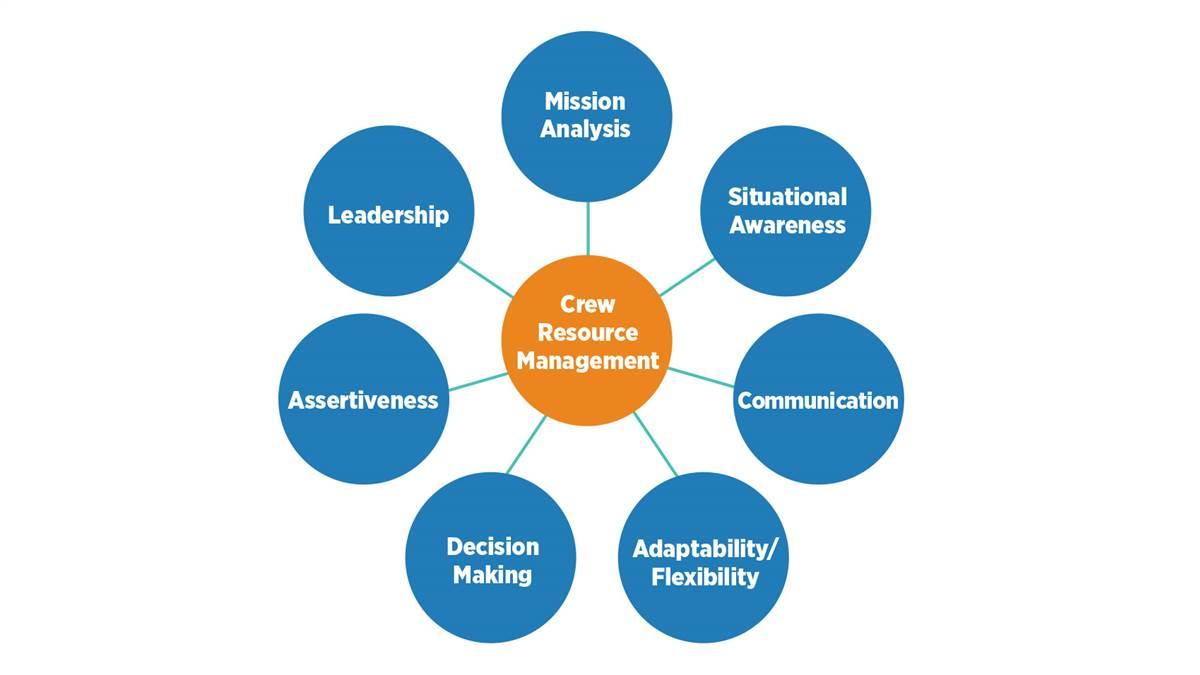 When it comes to the risks affecting flight safety, does your perception match reality? Situational awareness is your big-picture understanding of what’s going on around you, including factors related to you, the aircraft, your environment, and external pressure. Situational awareness grows with experience, but factors such as fatigue, complacency, or transitioning to a new aircraft can affect your ability to take it all in.

Although the focus is leveraging available resources through multi-person aircrews, pilots who operate in a single-pilot environment are not alone: They have a multitude of resources at their disposal.

Mission analysis. Planning is an important step for achieving any objective. Mission analysis evaluates overall requirements for a safe flight and what resources are available. There are three stages of mission analysis: preflight planning, inflight monitoring/updating current situation, and post-mission review.

Preflight resources include flight service, online weather tools, and airport directories such as AOPA’s online tool (www.aopa.org/destinations). In flight, updated weather along the route can be obtained from flight service and through datalink weather, if available. A regular scan of the engine gauges can detect trends early, before a problem fully develops. Early detection enables a pilot to make a decision from multiple and more favorable choices instead of a few limited options.

Following the flight, a quick post-flight debrief, whether by a simple personal review or a quick discussion with your fellow pilot or passengers, allows decompression time and a review of events. Were there any issues during the planning process or did the planning address the goals of the flight? If applicable, did the brief or preflight discussion address the expectations and maneuvers during the flight? Most important, did the flight occur as briefed? What happened unexpectedly? This is where any safety of flight concerns would be addressed.

Situational awareness. Situational awareness starts during preflight planning. Expectations are developed though determination of route, forecast weather, and established goals. During the flight when a problem arises, pilots with good situational awareness can better identify the source and nature of the problem or deviation. From that point they can use the information available to better understand their situation and, finally, develop a course of action leading to a decision.

Following the flight, a quick debrief should address any safety-of-flight concerns. Did the planning address the goals of the flight? What happened unexpectedly?
There is no sure way to develop situational awareness other than practicing it. Pilots can ask themselves questions such as do I know what aircraft are in the pattern from listening to the airport common traffic advisory frequency (CTAF)? Is the aircraft operating within limits? Do I know where I am along my route of flight? Other questions that can be answered include, Do selected checkpoints on the navigational charts match what I am seeing? Match the selected checkpoint on the chart to locate and confirm the feature on the ground. This can further be confirmed with the use of VOR radials from nearby navigational aids. Situational awareness improves with experience and becomes easier to maintain. This is the single most important factor to flying safety.

Communication. Communication has three parts: The sender sends a message to a receiver; the receiver receives the information and processes it; and the receiver provides feedback to the original sender. Some tips to improve communication skills are utilization of active listening, requiring feedback, and confirming understanding.

Adaptability/flexibility. Flights rarely go according to plan. External influences such as air traffic control, weather, terrain, and degraded aircraft systems can add difficulty to flights. Pilots must be able to alter a previously made decision as new information and influences are presented.

At one point or another in pilots’ flying careers, they experience get-there-itis. They have been flying for longer than expected or have some perceived stressor at the destination, such as work the next day or a business meeting, and they keep pressing on toward home. Their focus is so intense that small indicators of a developing problem are missed or dismissed. In fact, these signals are really holes in the proverbial Swiss cheese model aligning for a possible incident. A good example for this type of situation is not planning for an alternate airport, regardless of whether you are flying VFR or IFR.

Establishing decision points based on weather or minimum acceptable requirements such as arrival times provides a line in the sand that simplifies a determination to shift plans. For instance, while en route to a destination, the airport reports deteriorating weather below VFR weather minimums. Depending on the pilot’s experience, he or she could request to proceed IFR by picking up a clearance and shoot the approach (decision point 1). If the pilot was originally on an IFR flight plan and safely shooting an approach to minimums was not desirable, the pilot could say the trigger point for diverting is adding 200 feet and one-half statute mile to the published instrument minimums. This provides a safety buffer and time for anyone to see the indicators and make a decision early. If the pilot is not instrument rated, the pilot could proceed in marginal VFR conditions (not necessarily recommended) or divert based on other criteria (decision point 2). A plan should be viewed as a point of reference from which one could deviate. Incorporating decision criteria into a plan prevents poor decisions and enables responses to changes in the operating environment.

Decision making. This one is self-explanatory: The ability to determine a course of action based on the information available. Decision making goes hand in hand with adaptability/flexibility and assertiveness.

Assertiveness. Assertiveness is the courage to speak up or act in the face of adversity. This is a person’s willingness to make a decision and act on that decision. Indecisiveness is the same as deciding not to act. Assertiveness counters the hazardous attitude of resignation. Instead of relying on luck, information is gathered, a decision is made, and actions are taken that support the decision.

Leadership. Although pilots may not always fly within a crew, leadership is important. Pilots’ experience varies, and knowledge is passed on through mentorship.

It took me a few years to really learn and understand CRM before I comfortably applied CRM skills. What really drove home the point was looking back to an aerobatic solo early in my flying career. Summer thunderstorms in northwest Florida are common. They start to build gradually during late morning, until the afternoon heat provides the additional fuel for rapid build-ups. I had been cleared by the operations duty officer to walk to the airplane after briefing him on my intended working area. I chose the eastern coastline of Mobile Bay between Pensacola, Florida, and Mobile, Alabama, for the aerobatic maneuvers. After taking off and establishing myself in the working area, I proceeded with the assigned maneuvers.

While en route I noticed the usual afternoon build-ups (situational awareness). After maneuvering to avoid several clouds, I contacted the duty officer to pass a pilot report about the weather in the area and asked his opinion (communication). I also had the common area frequency in the other radio, and heard other pilots expressing similar concerns. When I noticed diminishing ground references, I decided to head back (decision making). Since I no longer had ground reference because of deteriorating visibility, I contacted Pensacola Approach and requested vectors back to Whiting Field. I was flying VFR, and the cloud base forced me lower and I started to scud run, which wasn’t my preference. I inquired about the minimum vectoring altitude (assertiveness), which provided a reference point. If forced to descend lower, I would no longer have ATC assistance and increased exposure to hitting something. After a few vectored turns and 10 stressful minutes later, I cleared a group of 1,000-foot radio towers that required a higher altitude in that sector. Once past the towers, I descended lower and switched to the tower frequency, and I landed without incident.

After shutting down, I had a moment to review the events that just transpired. The situation could have been more serious if I had not made the decision early and possessed the assertiveness to tell others of my concerns. Once ATC and the operations duty officer were aware of the situation, they provided the support necessary to return home safely. Had I not communicated, or delayed my decision because I thought the weather might improve, I could have been stuck VFR above the clouds without additional options.

Many resources are available to pilots. Simply knowing what is available and how to utilize the resources is a large step toward having a safe and enjoyable experience. Asking for assistance and applying all available information at a problem greatly increases the probability that a problem will be reduced to an annoyance. FT