Get the app Get the app
Already a member? Please login below for an enhanced experience. Not a member? Join today
News & Media 'Draco' to compete in AOPA STOL Invitational

The tricked out, highly modified hot-rod Wilga backcountry beast that has taken the general aviation world by storm is coming to the AOPA Fly-In at Livermore, California, June 21 and 22.

You can watch Draco owner Mike Patey show off the bright red short-takeoff-and-landing airplane during the AOPA STOL Invitational at the Flightline Cookout on Friday evening and during lunch on Saturday. Draco will face off against other STOL airplanes, including a Legend Cub, a Husky, a Kitfox, vintage Cessnas, a Staggerwing, and a Navion.

Patey takes the meaning of “highly modified” to a whole new level. The Wilga had a 250-horsepower engine, but he hung a Pratt & Whitney PT6A-28 680-hp turboprop engine on the front. And that’s not all.

Patey won the heavy class STOL competition at AirVenture in 2018 and then dominated at the 2018 High Sierra STOL Drag fly-in, where he was dubbed the “STOL Drag World Champion.”

So, don’t miss your chance to see Draco in action—come to the AOPA Fly-In at Livermore! In addition to what promises to be a thrilling STOL Invitational, we’ve also lined up several cool attractions during the two-day event: a drone aerial light show, aircraft display, exhibit hall with special deals, educational seminars, two pancake breakfasts, and two chances to attend a Pilot Town Hall with AOPA President Mark Baker. 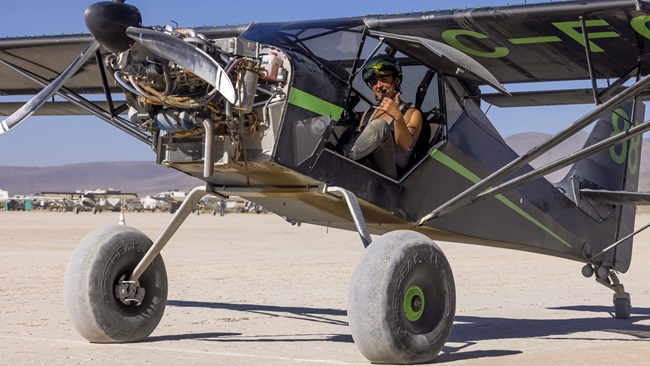