Get the app Get the app
Already a member? Please login below for an enhanced experience. Not a member? Join today
News & Media Aspen eases glass upgrade burden

Aircraft owners with steam gauges and glass aspirations may find it useful that Aspen Avionics secured FAA approval to install the Evolution E5 dual electronic instrument in VFR aircraft without a panel-mounted GPS. 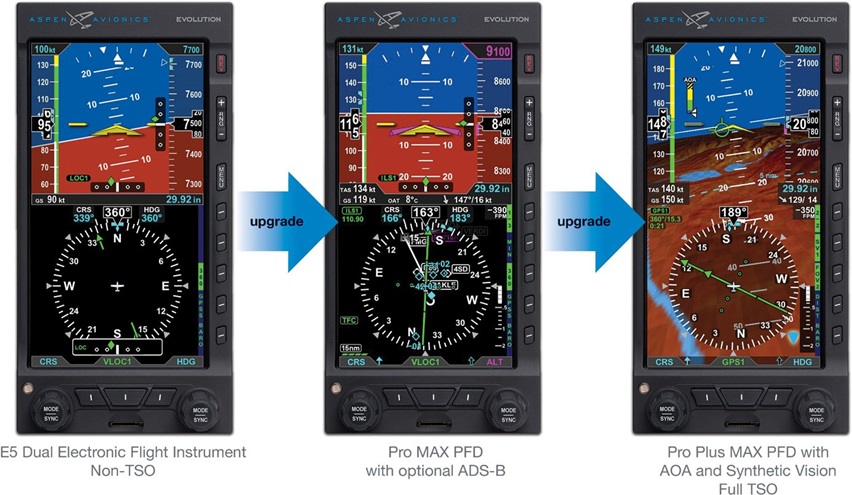 The Aspen Evolution E5 dual electronic instrument can be upgraded from the basic VFR version to include IFR capability, and IFR capability with synthetic vision. Photo courtesy of Aspen Avionics.

Listed at $4,995, the Evolution E5 was designed as a starting point for VFR aircraft owners seeking to do away with the attitude indicator and directional gyro/course deviation indicator. It nestles snugly into the same standard holes those instruments occupy. With a battery backup, the E5, announced in 2018, eliminated the need for a vacuum system and air-driven gyros in a certified VFR aircraft—provided that there was a panel-mounted GPS available. Aspen announced June 18 that limitation no longer applies, and that means that the E5 can provide gyro functions without having to tap into another GPS source.

That can cut tens of thousands of dollars from the cost of tossing the vacuum pump in the scrap heap along with a third of the six-pack. (Aspen also holds patents on technology to streamline the retrofit process.)

The E5 is also upgradable to enable for IFR flight, and from there to include synthetic vision. The Pro MAX version offers that feature, along with Automatic Dependent Surveillance-Broadcast, angle of attack, and hazard awareness.

The E5 can also integrate out of the box with the TruTrak Vizion autopilot, and works with many legacy autopilots (additional interface equipment may be required). Aspen provides additional information online.