Get the app Get the app
AOPA Members DO more LEARN more SAVE more - Get MORE out of being a pilot - CLICK HERE
News & Media Proficiency: Making it happen

As the mother of two teenage sons, I prize adventures with them as I know that, too soon, they will move off into the world to make their own adventures. 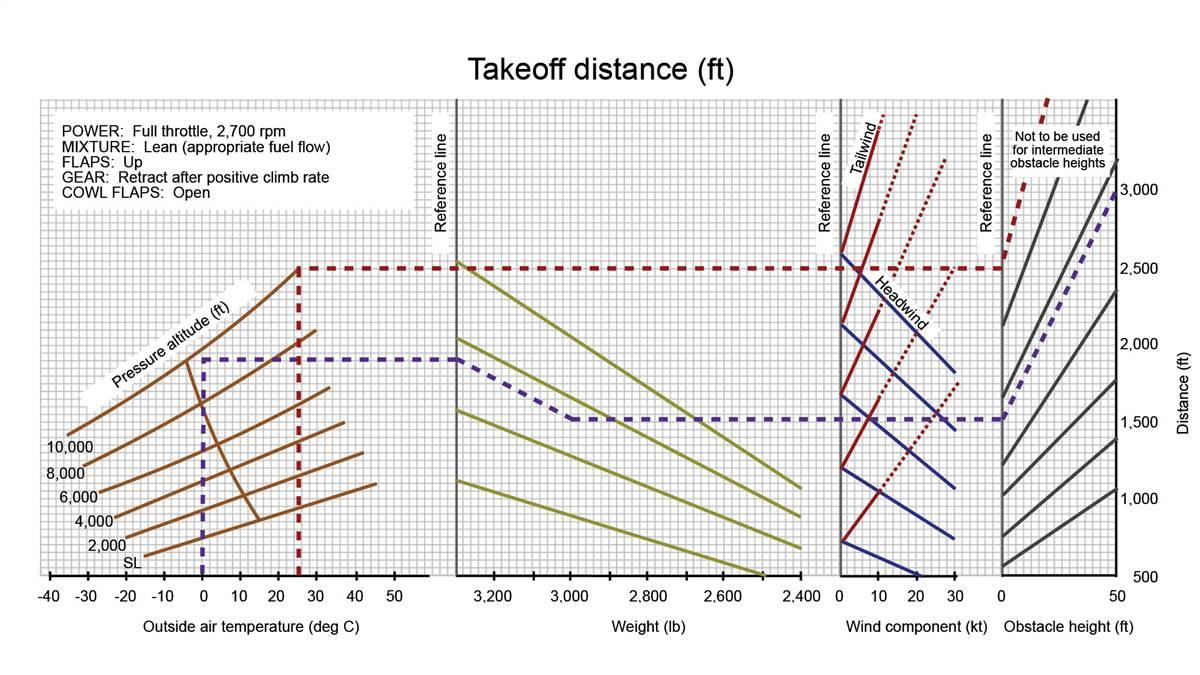 A performance chart shows a ground roll length of 2,500 feet for a takeoff at 3,300 pounds, 25 degrees Celsius, and a pressure altitude of 9,994 feet in the afternoon. But wait until the next morning, and the conditions are far more favorable.
Cavagnaro will be a featured speaker at the AOPA Fly-Ins in Frederick, Maryland; Livermore, California; and Tullahoma, Tennessee.

Rather than giving them tangible gifts, I let them choose adventures instead. Together we have flown ourselves to South Dakota to witness the grandeur of Mount Rushmore and southeast to relax on the beaches of the Bahamas. When the boys were gripped by World War II history, we flew to Fredericksburg, Texas, to touch the only Japanese midget submarine in the continental United States—and then to Chicago to tour the German U-boat U–505. A nonstop flight from our small town of Sewanee, Tennessee, to the College Park Airport in College Park, Maryland, where the Wright brothers taught Army officers to fly, meant that within just a few hours, we were at the museums in Washington, D.C. And although we continue to scratch items from our bucket list, we add them just as quickly, so the list never seems to get any shorter. Like other pilots, I derive a good deal of satisfaction from planning and executing an adventure that we will remember for years.

High on our list is a visit to Leadville, Colorado. At 9,934 feet msl, the Lake County Airport (LXV) boasts the distinction of the highest airport in North America and density altitudes in warmer months can exceed the operating limitations of many general aviation aircraft. My planning included a wide array of references, many focusing on high density altitude flight. It turned out that the best source was free and readily available—my aircraft’s operating handbook. I’ll share some of my planning steps in the hopes that it might help in your own flight planning where density altitude is a factor. While landing is also a critical phase of flight, we will focus on departing the Lake County Airport on a typical summer day.

Determine the mission feasibility. In this scenario, the Lake County METAR reported light winds from the south, visibility 10 statute miles, clear skies, temperature 25 degrees Celsius, and an altimeter setting of 29.86 inches of mercury. The lower pressure means that the pressure altitude is 9,994 feet this afternoon. With our aircraft at a maximum gross weight of 3,300 pounds, the pilot’s operating handbook shows a ground roll length of 2,500 feet (see chart above). (Note that we ignored the effect of winds for this exercise.) The distance to climb 50 feet above the airport is off the charts so, to investigate climb performance, consider the chart above. Under the same conditions, the climb rate is projected to be 480 feet per minute and becoming even more anemic during the climb. This scenario is a no-go for us as I need a greater safety margin.

Of high, hot, and heavy, I can change the last two—and what a difference a few hours can make. The following morning the conditions at Leadville are projected to be zero degrees C with an altimeter setting of 30.12 inches mercury, giving a pressure altitude of 9,734 feet. (Note that zero degrees C is still higher than standard temperature for Leadville.) Additionally, we’ll exercise some restraint in what we pack, and plan to depart 25 gallons down from full fuel for a takeoff weight of 3,000 pounds. In this case, the graph shows a takeoff roll of 1,500 feet—40 percent less than the day before—and a distance to reach 50 feet of 3,000 feet, using less than half of the available 6,400-foot runway. The expected climb rate at that altitude is an improved 750 feet per minute and an acceptable rate of 600 feet per minute to 13,500 feet msl as we depart along the Arkansas River toward lower terrain. 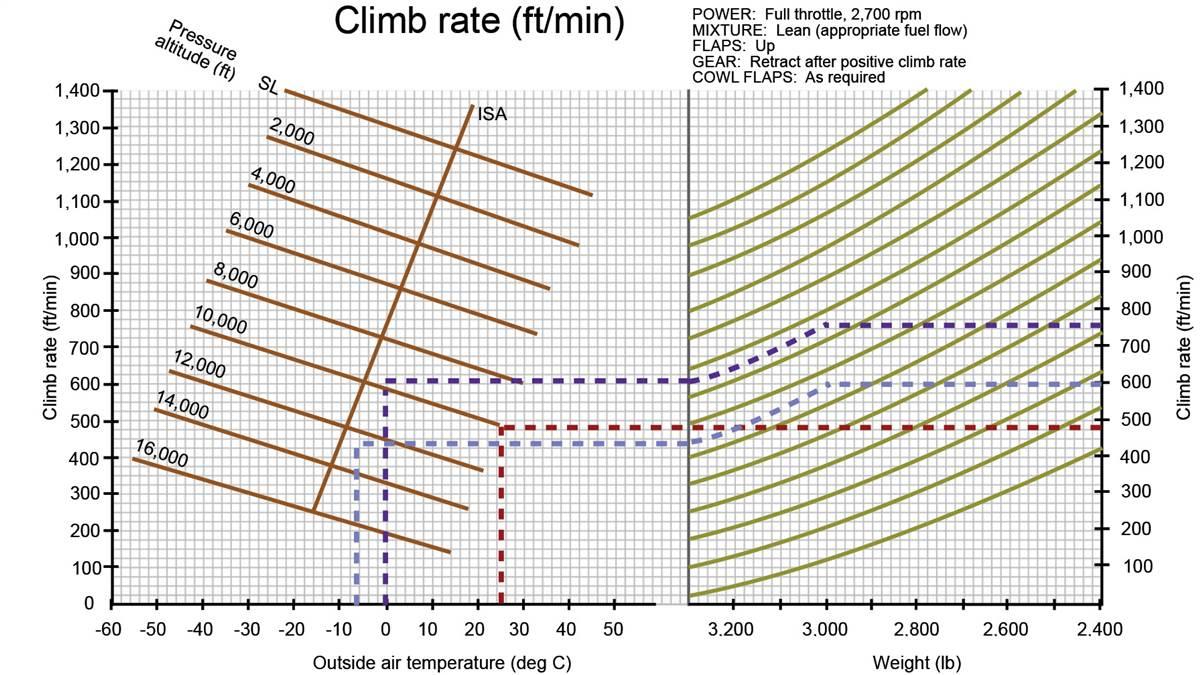 An afternoon takeoff in the given conditions would result in an initial climb of 480 feet per minute. By the next morning with a lighter takeoff weight, the expected climb rate is 750 feet per minute.

Know your airplane. Commit to computing aircraft performance on every flight. Given the current atmospheric conditions, use your performance charts to predict takeoff distance, climb rate, landing distance, and other performance metrics. Log both the predictions and the value obtained on the flight, and compare them. You’ll discover how reliable those charts are and whether you need to make adjustments.

Don’t extrapolate. Are you considering density altitudes that are off the performance charts? That may be a sign your airplane isn’t the best choice for the mission at hand.

Carefully assess the winds. I ignored the winds in my performance assessment because I don’t want to rely on them to help takeoff performance, but their effect can be profound. In this case, a 10-knot headwind on takeoff can shave hundreds of feet from the takeoff roll. Departing with a 10-knot tailwind will add almost three times that value. Keep in mind that a tailwind hurts takeoff performance far more than a headwind helps it. (For a sloping runway, the situation warrants careful study as it might be better to accept a slight tailwind in order to take off downhill.)

Borrow a page from instrument procedures. Although we plan to fly to and from the Lake County Airport in visual meteorological conditions, instrument procedures can provide valuable tools. For example, LXV lists two RNAV obstacle procedures—DAVVY TWO for use with Runway 34 and LOZUL FOUR with Runway 16. Minimum climb gradients along with the FAA Climb/Descent Chart (see “There’s a Chart for That,” February 2019 AOPA Pilot) can help in assessing whether a safe departure and climb to cruise altitude is feasible.

Make an abort plan. With an estimated ground roll of 1,500 feet and, in similar conditions, a landing distance (ground roll) of 1,000 feet, I decided to identify a landmark 2,000 feet from the beginning of the runway as a decision point to abort or continue the takeoff. If we are not off the ground before the landmark then performance is significantly less than expected and there will be ample distance to retard the throttle and stop the airplane on the runway. You may choose a different value, but ensure that the sum of the distance to rotation, the distance to stop, and a safety buffer is less than the available runway length.

There is an oft-quoted rule of thumb about aborting a takeoff if a certain percentage of rotation speed is not achieved halfway down the runway. Unfortunately, this rule cannot guarantee that 100 percent of rotation speed is available at a safe point along the runway. Because air resistance increases with speed, each additional knot of airspeed will take longer to achieve than the one before. For example, accelerating an airplane from 50 knots to 60 knots will take less time (and distance) than accelerating from 60 knots to 70 knots. Furthermore, the rule ignores the distance needed to stop if a safe takeoff cannot be made. Identifying a landmark along the runway by which to rotate is an easier and far safer strategy.

Configure the aircraft properly. Performance estimates are predicated on an aircraft configured as specified on the chart. Failing to lean for maximum power or not retracting the landing gear once a positive rate of climb is achieved will degrade performance considerably. If you do most of your flying at low density altitude, leaning on the ground may be new to you, so be sure to consult the POH for the procedure and include it on your checklist.

Anticipate a higher takeoff speed. Rotation during takeoff should happen at the same indicated airspeed regardless of altitude. But at higher altitudes, the true airspeed, or what the pilot perceives visually, increases. Keep an eye on the airspeed indicator and resist the temptation to rotate before the airplane is ready to fly.

Finally, ask a local. I called the Lake County Airport FBO to ensure my planning had been complete. German Aguirre, an airport attendant and student pilot who is a native of Leadville, was kind enough to field my myriad questions. Not surprisingly, the airport is quiet in the afternoons with operations generally occurring in the morning. The airport will be closed for several weeks this summer while the runway is repaved so we will plan to visit in the fall. Aguirre also told me that the FBO presents a certificate to those who have visited LXV by airplane and advised me to make sure I ask for one. That will be a perfect memento as my sons and I include another bucket list item in our collection of memories.

Catherine Cavagnaro owns Ace Aerobatic School in Sewanee, Tennessee (aceaerobaticschool.com) and is a professor of mathematics at Sewanee: The University of the South.