Get the app Get the app
AOPA Members DO more LEARN more SAVE more - Get MORE out of being a pilot - CLICK HERE
We will be performing maintenance on our systems Tuesday, 9/27, beginning at 12:00 A.M. ET and ending at 6:00 A.M. ET. During this time, you may experience intermittent service outages. We appreciate your patience.
News & Media Tornado destroys Alabama airport

Official: 'We'll rebuild better than ever'

The twisted aluminum of wrecked airplanes and flattened hangar buildings is scattered across Weedon Field Airport in Eufaula, Alabama. 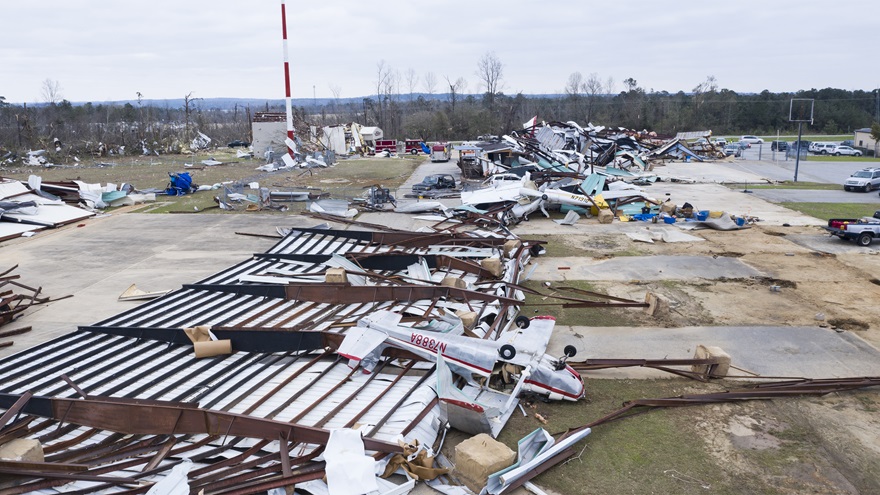 Weedon Field Airport after a devastating tornado ripped through the Eufaula area. Photo courtesy of SkyBama.com/Alabama Aerial Photography.
A tornado devastated the city-owned airport on the afternoon of March 3, destroying almost all 27 airplanes based there and 30 hangars.

Two corporate jets, a HondaJet and a Challenger, were damaged when the wind knocked down the corporate hangars where they were housed. T-hangars were leveled, and the mostly single-engine airplanes inside them were ripped apart and some were tossed hundreds of yards away.

“There are planes in trees,” McCall said. “Concrete trusses have been ripped out of the ground.” 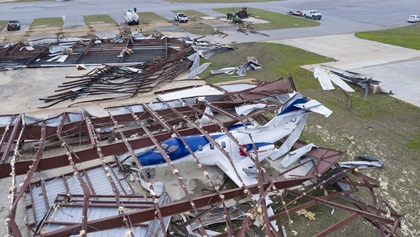 As sometimes happens with tornadoes, however, devastated structures and unscathed ones are only a few feet apart.

The Eufaula Jet Center, the airport fuel farm, and Sam’s Kitchen and Grill, the airport restaurant, all were spared. The airport’s 5,000-foot runway also was undamaged.

“Sometimes you’ve got to knock something down to rebuild it stronger,” she said. “We’re a tight-knit community. The city loves this airport. We’re going to stay up and operational—and we’ll rebuild better than ever.”