Get the app Get the app
Get the latest news on coronavirus impacts on general aviation, including what AOPA is doing to protect GA, event cancellations, advice for pilots to protect themselves, and more. Read More
Already a member? Please login below for an enhanced experience. Not a member? Join today
News & Videos Helo pilots say drone tech can enhance safety

Pilots of drones and helicopters seem at times like aeronautical Hatfields and McCoys, each camp eyeing the other warily, sometimes competing for the same dollars. Yet some helicopter pilots suggest embracing unmanned options will save lives. 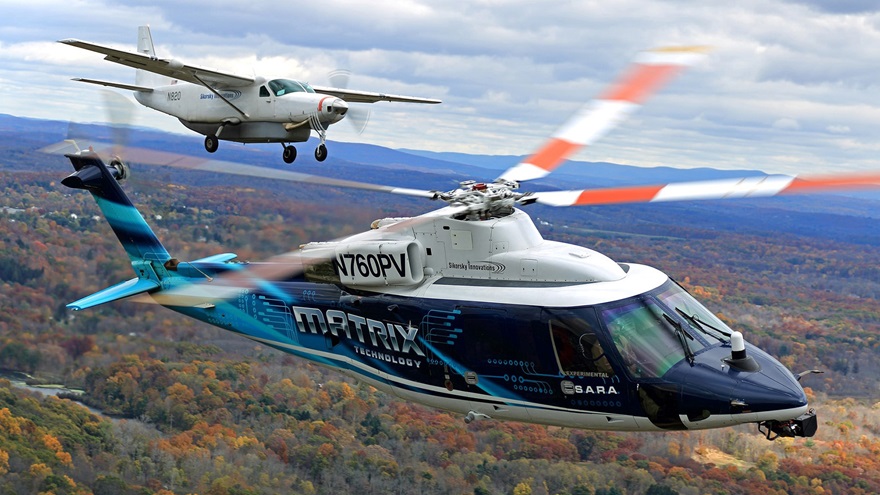 The U.S. Helicopter Safety Team spun off from the International Helicopter Safety Team in 2013 and is composed of government regulators and industry operators who make data-driven safety recommendations to the rotorcraft industry. In February, just ahead of the rotorcraft world’s largest annual gathering, the advocacy group released a report that details a vision for reducing fatalities in part by removing humans from the equation in certain situations, and also giving helicopter pilots access to tools and technology that allow small drones to avoid obstacles, hover without pilot input, and even fly themselves home.

The report’s authors studied years of accident data, zeroing in on the most common fatal accident factors. More than half of the fatal helicopter accidents since 2009 involved loss of control, unintended flight into instrument meteorological conditions, or low-altitude operations. The USHST concluded that loss of human life could have been avoided in roughly one in five of the accidents involving these factors, if an unmanned aircraft system (UAS) or optionally piloted aircraft (OPA) been used instead of a manned helicopter.

“Applications that can be performed by UAS or an OPA continue to grow,” the report states. “Given the continued expansion of UAS and OPA (both in sensor and performance) capabilities, their use to supplement and support operations is logical when manned operations are at a particularly high risk, such as in low level situations, rapidly changing terrain and weather, and especially near manmade obstacles (poles, towers, wires, etc.).”

Complacency, fatigue, birds, quickly changing weather, and obstacles are common risks associated with power line inspection, aerial application of chemicals, firefighting, crop defrosting and harvesting, and pipeline and wind turbine inspection. While it’s lucrative work, missions like these come with higher risk, and the report recommends, in essence, letting drones handle the dangerous jobs that are within their capability.

The authors also recommend fitting manned helicopters with drone technology including obstacle avoidance systems that are already used by off-the-shelf drones that cost $1,500 or less. The report lists 22 current UAS capabilities that could benefit helicopters.

A third recommendation is to fit helicopters with technology allowing them to be remotely piloted, or piloted by less complex, more intuitive means. Reducing human pilot workload and distractions would inevitably increase safety.

“Integrating this technology is not meant to replace pilots in the cockpit. I love my job and want to keep it,” said Mark Colborn, a Dallas Police Department helicopter pilot and a co-author of the USHST report. He said the realization that drone capabilities could be introduced to manned helicopters was his “V-8 moment.”

Some manufacturers are already well on their way to doing this. Sikorsky, a Lockheed Martin subsidiary created by and named after the inventor of the world’s first practical helicopter, has been testing a 12,000-pound S–76 dubbed the Sikorsky Autonomy Research Aircraft. SARA is equipped with automation technology that enables the helicopter to fly with little or no human input. While highly qualified test pilots remained on board during the early tests, the company has more recently tested the system with nonpilots who take the controls with as little as 30 minutes of training. One of the program’s goals is to allow future helicopter pilots to take their hands and feet off the controls and concentrate more on the overall mission. There is also an economic aspect, particularly as many companies are vying to create on-demand urban air taxi service. While many are building electric vertical takeoff and landing concepts from scratch, more traditional helicopters could one day fly with two crew, one pilot or none, making more room for passengers (aka “paying customers”).

The USHST study focuses on safety more than economics, though the report addresses both. More than a few helicopter pilots insist that drones are killing their business by oﬀering cheaper, and at times, more readily available alternatives to the heavier, more costly aircraft. The report urges helicopter operators to integrate drones into their business to increase profitability and safety.

Drone pilots might argue that they can do many aerial missions cheaper, in more marginal weather, and with considerably less risk to people and property. There are aspects to each perspective that ring true. While drones weighing less than 55 pounds can still cause some damage in the event of an accident, it would pale compared to that of a full-scale helicopter mishap. The report includes a look at nonfatal accidents that resulted in injuries and very expensive bent metal. Pilot distraction increases risk when operating close to the ground or near obstructions.

Size still does matter in some commercial applications, and small drones can’t do everything. Rotor wash from even the largest drones will not defrost cherry orchards like a helicopter can. However, referencing several of the recommendations, a full-scale OPA helicopter could safely hover over orchards with far less risk. In areas of the country plagued by feral hogs, a UAS can certainly locate them today, but can’t legally fire a rifle at them to “remove” the problem. That requires a full-sized helicopter.

The convergence of these markets and missions seems inevitable.

The report paints an optimistic picture of a future where drones and helicopters share technology and minimize accidents. Getting there will also involve advances in how drones and OPA share airspace and communicate with each other. The FAA is expected to soon require all unmanned aircraft to broadcast their position as a prerequisite for routine operations beyond visual line of sight. Automatic position reporting would surely augment active detect-and-avoid systems based on radar, visual, or acoustic technology.

The USHST readout, while focusing on helicopter safety, is looking beyond safety to envision evolving roles for all types of aircraft in an increasingly unmanned airspace. Imagine a 12,000-pound helicopter that could just “return to home” with the push of a button, or when it deems its mission is becoming a little too risky. The USHST also recognized that smaller unmanned aircraft can more cheaply do some of the same jobs handled by helicopters today.

Embry-Riddle Aeronautical University professor Scott Burgess joined fellow helicopter pilot Colburn at the Helicopter Association International Heli-Expo in Atlanta to deliver a message: Helicopter pilots need not see unmanned aircraft as a threat, and should embrace them, integrate them in their business operations, and benefit from them.

“There is plenty of room for everybody,” Burgess said.

Zach Ryall of Austin, Texas, satisfies his passion for aviation between a Mooney M20E and his DJI Phantom 4 Pro. An instrument-rated private pilot and certificated remote pilot, Ryall retired from a 41-year career as a photojournalist and media manager.
Go to Zach Ryall's Profile
Topics: Helicopter, Unmanned Aircraft