Get the app Get the app
Get the latest news on coronavirus impacts on general aviation, including what AOPA is doing to protect GA, event cancellations, advice for pilots to protect themselves, and more. Read More
Already a member? Please login below for an enhanced experience. Not a member? Join today
News & Videos Veteran pens his place in history at AOPA Fly-In

Thank you, Franklin Payne, for giving a group of strangers who came together at a fly-in to admire a stately old airplane a moment they will remember forever.

It was the kind of moment—an impromptu ceremony, simple yet deeply moving—that happens when people with a passion for something like aviation gather to celebrate what they love and pay homage to its past. And that’s just what a lively crowd was doing at the AOPA Fly-In and eightieth anniversary celebration May 10 and 11 at Frederick Municipal Airport in Maryland.

An early morning drizzle had relented on the fly-in's opening day and a cold front was pushing through, but already clusters of showgoers were moving along the flight line—especially where an assemblage of Douglas DC–3 and C–47 aircraft awaited preparations for the day’s flyover of Arlington National Cemetery in honor of the seventy-fifth anniversary of the D-Day invasion of June 6, 1944.

The flavor of aviation was all around, roaring into the sky from the runway just yards away, or stopping spectators in their tracks to look up as a flight of military training airplanes of a past era arrived overhead in formation, then banked away in salute.

Among the big Douglas taildraggers whose three-point posture on the ground irresistibly captivates the aviation-inclined imagination was Placid Lassie, a Douglas C–47 that was built in 1943, was assigned to the 74th Troop Carrier Squadron, and participated in the D-Day landings of Operation Neptune. Placid Lassie is now the property of the Tunison Foundation, a nonprofit named for Ed Tunison, a radio operator who by 2014 was the only surviving member of his Placid Lassie wartime crew, according to the foundation.

One of the pilots who get to fly Placid Lassie is Garrett Fleishman, a junior at Embry-Riddle Aeronautical University who also works for Tradewind Aviation, a charter operator whose president, Eric Zipkin, is president of the Tunison Foundation’s board of directors.

Fleishman was showing me around Placid Lassie when we saw Tater, the airplane’s jumpmaster, also known by his real name, Mack Taylor, ushering a group of people up the steps at the rear of the aircraft. 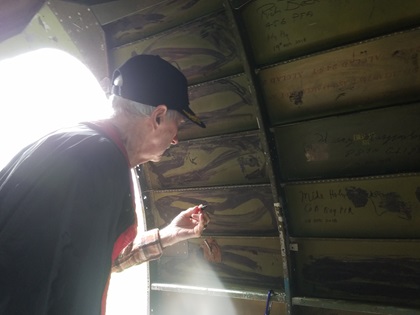 An elderly man in a U.S. Army Air Corps cap was one of those who climbed aboard. Someone handed him a marker, and he began to write his name on the inside of Placid Lassie’s metal wall, near where other veterans had autographed the airplane.

His friends introduced me to him. Franklin Payne, 92, of Winchester, Virginia, was a C–47 crew chief in France and Germany during the war. Since then he had not had any contact with a C–47, he said.

Payne made the trip to the AOPA Fly-in accompanied by friends Ron Embrey and Eric Lindengren, and was provided with a ride to the flight line by fly-in staff. Patiently and unhesitatingly, he had made his way up Placid Lassie’s metal steps, which were still wet from morning showers, to add his inscription of honor to the other veterans’ autographs.

Finding a writing implement that would function on demand took a few moments, but nobody minded—seemingly least of all Payne.

Focused on his writing, one wonders if he sensed the impact his impromptu signing ceremony had on those who stood and watched him gently pen his place in history.

Then it was back down the steps and into the sunlight for Payne, with the thanks of new friends—for his service, for sharing his special moment, and for honoring the AOPA Fly-In with his presence—ringing in his ears.