Get the app Get the app
Get the latest news on coronavirus impacts on general aviation, including what AOPA is doing to protect GA, event cancellations, advice for pilots to protect themselves, and more. Read More
Already a member? Please login below for an enhanced experience. Not a member? Join today
News & Videos Trouble with the tether

Pierce Manufacturing of Wisconsin, among the world’s largest producers of fire trucks (along with engines, tankers, and aerial ladders), aims to drive drone-equipped fire apparatus straight through a regulatory loophole opened by Congress last year. What could go wrong? 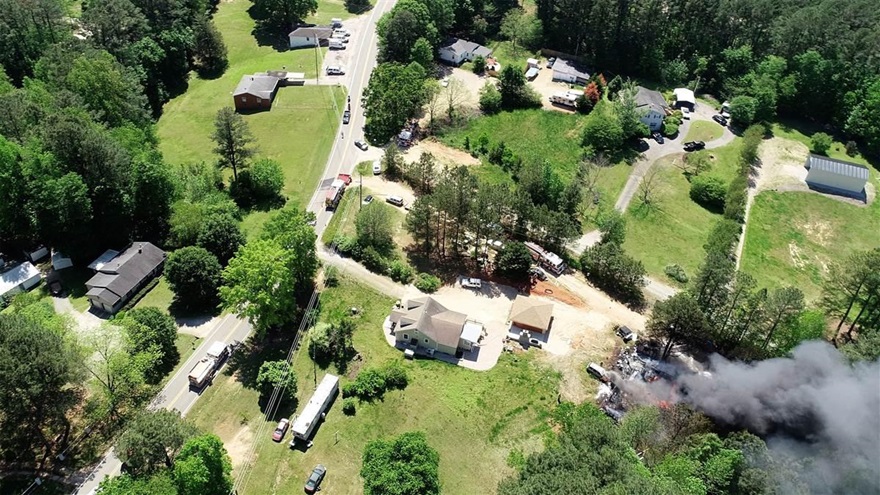 Not every fire scene lends itself to viewing from a drone on the end of a tether. Photo courtesy of Steve Rhode, Wake Forest Fire Department.

Swiss tethered drone maker Fotokite supplies the unmanned aircraft tucked away in the Pierce-built rigs and ready to launch and climb more or less straight up to 150 feet. As I was contemplating this Situational Awareness System, we were dispatched to a structure fire that reinforced every bit of skepticism I have when I contemplate the risks and rewards of using any tethered drone at a fire scene.

It seems worth noting that the marketing materials for this Fotokite add-on appear to deliberately avoid using the word “pilot,” though it’s hard not to view a tethered drone as an aircraft, which leads me to wonder who’s on the hot seat if things go sideways. Fotokite and Pierce were unable to arrange a hands-on evaluation, so all I can really go by is the brochure and my own experience with flying (untethered) UAS at fire scenes.

Much of the Situational Awareness System pitch appears to be plucked from the pages of the 2018 FAA reauthorization, Section 44806, which directed the FAA to “permit the use of, and may issue guidance regarding, the use of public actively tethered unmanned aircraft systems.”

Congress gave the FAA 180 days to implement this provision, which would allow public safety operators to fly tethered drones up to 150 feet agl, except in controlled airspace where a published FAA UAS Facility Map (depicting controlled airspace divided into blocks for the Low Altitude Authorization and Notification Capability) has a lower limit. The tethered drones, according to federal law, must not fly directly over “non-participating persons,” remain within the visual line of sight of the operator, and be “operated in a manner that does not interfere with and gives way to any other aircraft.”

Congress further directed that such tethered aircraft can be operated without a pilot certificate (remote or otherwise), without a waiver or certificate of authorization, “or other approval by the Federal Aviation Administration.”

Are you starting to see where the problems might arise? How do we define a “non-participating person” outside of the context of Part 107? How does an operator spot approaching air traffic and give way if the engine is parked in a place with limited sight lines?

I put some of these sticky questions to Fotokite CEO Chris McCall via email.

McCall wrote that when it comes to maintaining a visual line of sight, "Fotokite systems are launched directly overhead the ground station and automatically maintain this position (with variable height up to 150 ft.) throughout a deployment. Operators are trained to check for direct overhead obstacles that could impede the safe flight and visual line-of-sight to the system at any time, similarly to deploying a fire ladder directly above any operation. Flying directly above the deployment area, while a restriction to some operations, provides a safe and reliable way to ensure line of sight and guarantees operations are maintained only above participating personnel."

It’s not entirely clear if the traditional Part 107 definition of participating personnel will apply to the mission created by an act of Congress that is, by definition, not governed by Part 107 rules. Will departments have to designate personnel on scene to exclusively operate the Fotokite, and will they be required to watch it like we have to do with untethered UAS now? That isn’t clear, yet.

"Firefighters are currently operating these systems without assigning separate additional personnel as visual observers, which is in line with our direct discussions and consensus with our FAA contacts," McCall wrote. (I've yet to see any published rule or other documentation from the FAA confirming this agreement.) McCall went on to say, the "operator's capacity to serve as the visual observer is greatly increased compared to normal UAS operations."  I'm not quite sure how.

Are operators of these tethered systems a pilot in command, with the responsibility that comes with that? Hard to say at this point. If a tethered drone fails to give way to another aircraft, who’s responsible? The lawyers might have fun with that, but not so much the pilot(s) or operators involved (that we can be pretty sure of).

I suspect the Fotokite will fly perfectly well at the end of its 150-foot tether. I'm sure it will slide out, power up, zip up to 150 feet (depending on cable tension) dragging its tail, and stream moderate-resolution thermal video back to the ground, able to stay aloft for hours on end.

But consider this: Will the drone-equipped fire engine be the first on scene, able to park in optimal position? What happens if the street is too narrow, or the fire is, say, 500 feet from the closest possible approach? With no dedicated personnel, who will have time to interpret the images coming down from the bird and translate them into actionable information? What happens when a nearby ladder needs to swing through the space occupied by the tether?

Back to that structure fire I mentioned: Arriving units were stacked up down a hilly two-lane road. If the truck with the slide-out UAS was stuck behind the pack of 12 other responding units, the view could easily have been from the wrong angle to be useful.

Because I’m a pilot and my unmanned aircraft has no tether to drag around, I was able to avoid the crowd and set up the landing zone a block away in a quiet cul-de-sac, fly inbound over the trees, and pick the best angle to get the most actionable information from the fire using both visual and thermal cameras. The lack of a tether, and the operational restrictions it imposes, left me free to capture critical, actionable information.

I suspect tethered aircraft will have a place, but it’s too soon to say if the slide-out on a fire engine is really the optimal situation for them, just to make you aware of that.

Steve Rhode has been flying manned aircraft since 1988, and is an instrument rated private pilot as well as a certificated remote pilot. Steve serves as chief pilot with the Wake Forest Fire Department in Wake Forest, North Carolina, and as an unmanned aircraft instructor.
Go to Steve Rhode's Profile
Topics: Unmanned Aircraft, Technology