Get the app Get the app
Get the latest news on coronavirus impacts on general aviation, including what AOPA is doing to protect GA, event cancellations, advice for pilots to protect themselves, and more. Read More
Already a member? Please login below for an enhanced experience. Not a member? Join today
News & Videos Fly, drive 'The Way of American Genius'

In a small town in north-central Missouri, you can see where Walt Disney says he found the magic. 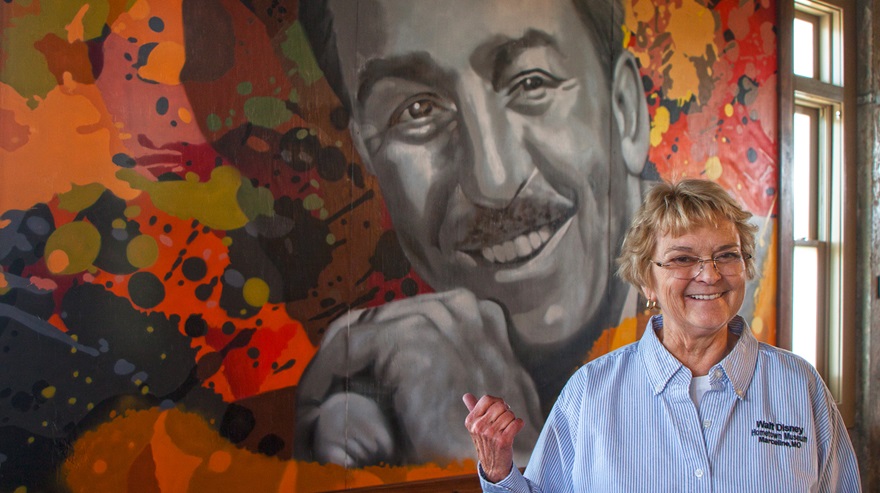 Walt Disney Hometown Museum director Kaye Malins in front of a mural of Walt Disney inside the museum in Marceline, Missouri. Walt says he found his magic as a child growing up in Marceline. Photo by MeLinda Schnyder.

It’s one of many attractions showcasing iconic American innovators, big ideas, and inventions on U.S. Highway 36, dubbed “The Way of American Genius.”  This route in northern Missouri will also take you to the boyhood home of Samuel L. Clemens (Mark Twain), the birthplaces of Gen. John J. Pershing and J.C. Penney, and the towns where sliced bread and the Pony Express started.

It’s a great option for a fly-and-drive vacation. Fly to either anchor city: St. Joseph’s Rosecrans Memorial Airport or Hannibal Regional Airport, whose field is named after Bill Lear, born in Hannibal in 1902.

Americangeniushighway.com provides information on stops, audio tours, and itineraries for the highway corridor, which encompasses 36 miles north and 36 miles south of the actual highway.

Here is what you can expect at six stops along “The Way of American Genius.” 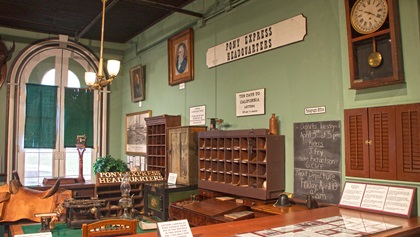 St. Joseph, with a population of 90,000 people, is the largest city along Missouri’s stretch of Highway 36. The city has more than a dozen museums. At the Patee House Museum, learn about the area’s history including inventions of the Cherry Mash and Aunt Jemima pancake mix, the headquarters of the Pony Express, and the place where infamous outlaw Jesse James was killed in 1882. There’s also the Pony Express National Museum  for a broader look at the short-lived mail service.

The free Walter Cronkite Memorial chronicles the life of the famed anchorman who helped launch CBS Evening News. Interactive displays include a towering video wall with Cronkite’s broadcasts of famous events and a replica of his CBS newsroom from the late 1960s to early 1970s. 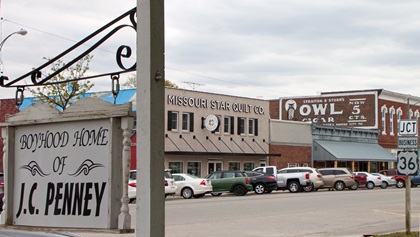 Historic and current genius intersect in Hamilton. James Cash Penney was born and raised on a nearby farm before going on to found one of America’s largest retail chains. Learn about his life and the history of the company at the free J.C. Penney Museum  or take a look at Penney’s boyhood home, which was moved to Hamilton’s walkable downtown.

What regularly brings 10,000 visitors a month to a town of 1,800 residents are the 14 themed quilt shops of Missouri Star Quilt Co., which opened its first store in 2008 to channel the internet celebrity of its matriarch—Jenny Doan, also known as Mama Doan—into a quilting empire that offers the largest selection of precut fabrics in the world. 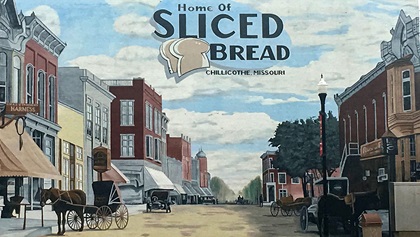 The Grand River Historical Society Museum displays the large bread-slicing machine invented by Iowan Otto Frederick Rohwedder and first put into service in 1928 by the Chillicothe Baking Co., recognized as the first commercial bakery in the world to offer machine-sliced bread for sale. Rohwedder’s first machine did not survive, so his second automated slicer is on loan to the museum from the Smithsonian Institution (call ahead to see if it’s still on exhibit). 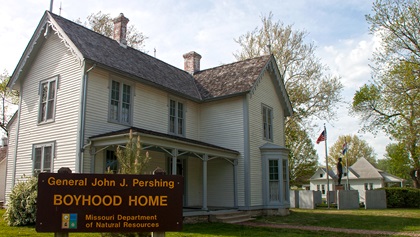 Laclede, a town of about 400 midway between St. Joe and Hannibal, is where you’ll find the Gen. John J. Pershing Boyhood Home State Historic Site. Guided tours are available of the interior of the nine-room Gothic-style house he lived in from 1866 until 1882, when he left for the U.S. Military Academy at West Point. The Prairie Mound School where Pershing taught prior to going to West Point was moved on site and has self-guided exhibits taking visitors through a timeline of his career. There’s also a statue, a veterans memorial, and a First World War Commemorative Garden.

Marceline: Where Walt found the magic 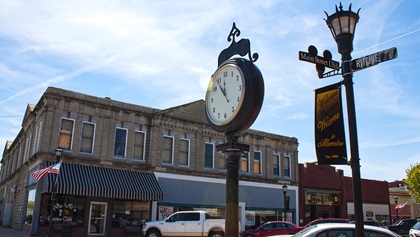 The Walt Disney Hometown Museum is in a 1913 Santa Fe Railroad station built on the spot where the Disney family stepped off the train in 1906. They spent just five years or so here before moving to Kansas City, but the time spent on the family farm and in this railroad town made a lasting impact.

“Walt would later say that it was in Marceline where he found that magic of his life,” said Kaye Malins, the museum’s director and a founding board member along with her mother, Inez Johnson. The Johnson family got to know the Disney family through the years and now own the Disney family farm.

The museum opened in 2001 after the gift of some 3,000 family artifacts from Disney’s sister Ruth. While a visit to Marceline is more about the man than the mouse, Disney devotees come to this town of 2,200 to get a feel for what inspired Disney and to hear the stories of his childhood and return visits to Marceline that aren’t told elsewhere.

The 10,000 square feet of gallery space is filled with Disney family letters and artifacts, photographs, and memorabilia from Disney’s visits to Marceline and unique items such as plans for a living history theme park in Marceline that Disney was working on at the time of his death and a car from Autopia, the only ride to have left Disneyland and maintain operation outside the park’s control.

Explore the life of Mark Twain and the real people who inspired many of his most well-known books and characters. The Mark Twain Boyhood Home and Museum, a National Historic Landmark, also includes the Becky Thatcher House, Huckleberry Finn House, J.M. Clemens Justice of the Peace Office, an interpretive center, and a museum gallery with family artifacts and a collection of Norman Rockwell paintings. Elsewhere in town you’ll find Mark Twain Cave, the Mark Twain Riverboat, and storytelling performances by Twain re-enactors. Don’t miss exploring the historic downtown district, too.