Get the app Get the app
AOPA Members DO more LEARN more SAVE more - Get MORE out of being a pilot - CLICK HERE
News & Media Proficiency: Not so fast

Proficiency: Not so fast

Aerobatic flight is like riding a roller coaster—you experience the same thrills of twirling through the air while being pulled down into your seat and, sometimes, floating above it. 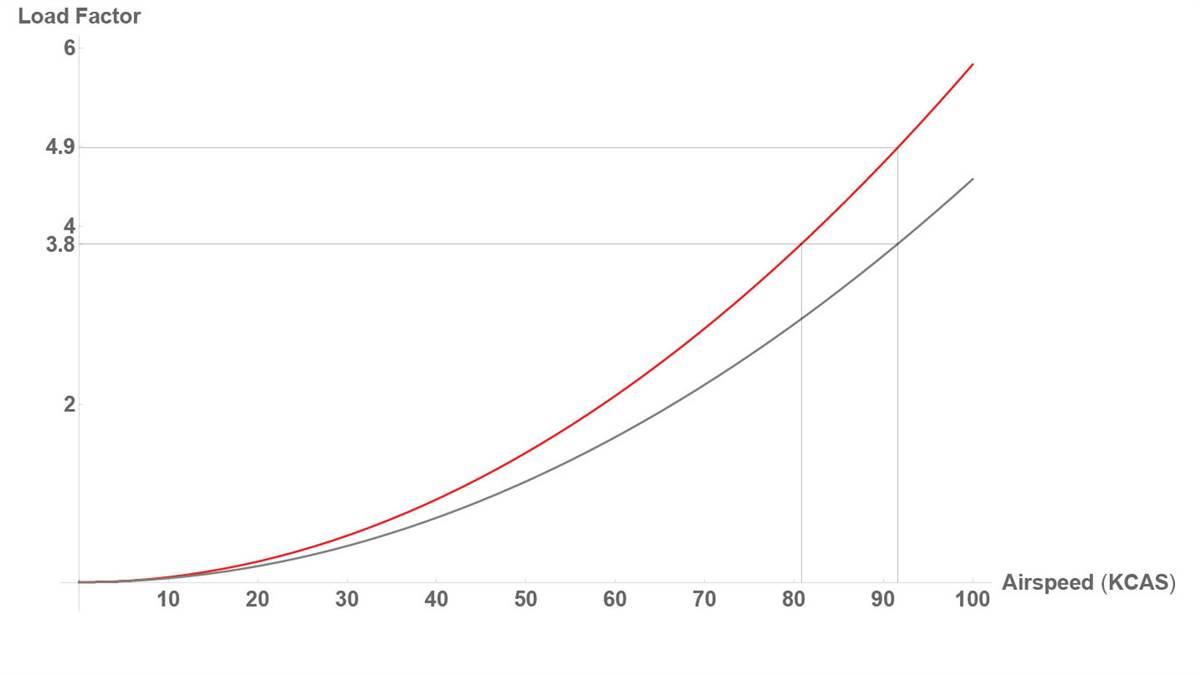 With aerobatics, though, the pilot is free to determine the course and the fun can last longer. As an aerobatics instructor, I am blessed to share this joy with pilots regularly. The maneuvers are fun but the course itself is all about safety, and every maneuver on the syllabus features a lesson for getting out of a sticky situation. In fact, some pilots seek aerobatic instruction solely to practice authoritative aircraft control and to build confidence in everyday flying.

Recently my aerobatic student, Louise, asked, “Can we include snap rolls in our training?” A snap roll is a spin that is entered using an abrupt application of back-pressure on the yoke, often with the aircraft moving parallel to the earth instead of directly toward it. Done incorrectly—and that’s easy to do—snap rolls can be hard on the aircraft and its occupants. Unlike the aerobatic maneuvers on my syllabus, there is no sticky situation for which a snap roll is the answer. So, as a rule, I teach snap rolls only when my student has a particular interest. Louise had such an interest, so we made sure to thoroughly investigate the loads associated with abrupt maneuvers, a valuable topic for any pilot.

Every time an airplane climbs or makes a level turn, its lift is more than its weight. The load factor incurred in a particular maneuver is lift divided by weight. We describe load factor in terms of Gs as a comparison with the acceleration because of gravity. So, in straight and level, unaccelerated flight you incur a load factor of 1 G, the same load factor you experience while relaxing in your favorite chair. During a 60-degree-bank, level turn the load factor of 2 Gs means you feel twice as heavy as you normally do. Performing a loop involves pulling 3.5 or 4 Gs. Load factors less than one correspond to feeling light in the seat, floating, or even accelerating upward with the realization that your shoulder harness should have been fastened more tightly.

Exactly how strong are the airplanes we fly? The FAA requires that aircraft be designed to withstand a range of load factors with no damage or deformation. For the three most common aircraft categories, these ranges are minus 1.52 to plus 3.8 (Normal), minus 1.76 to plus 4.4 (Utility) and minus 3 to plus 6 (Acrobatic). Because Acrobatic category aircraft routinely incur high load factors, they are equipped with accelerometers to ensure that G limits are not exceeded. 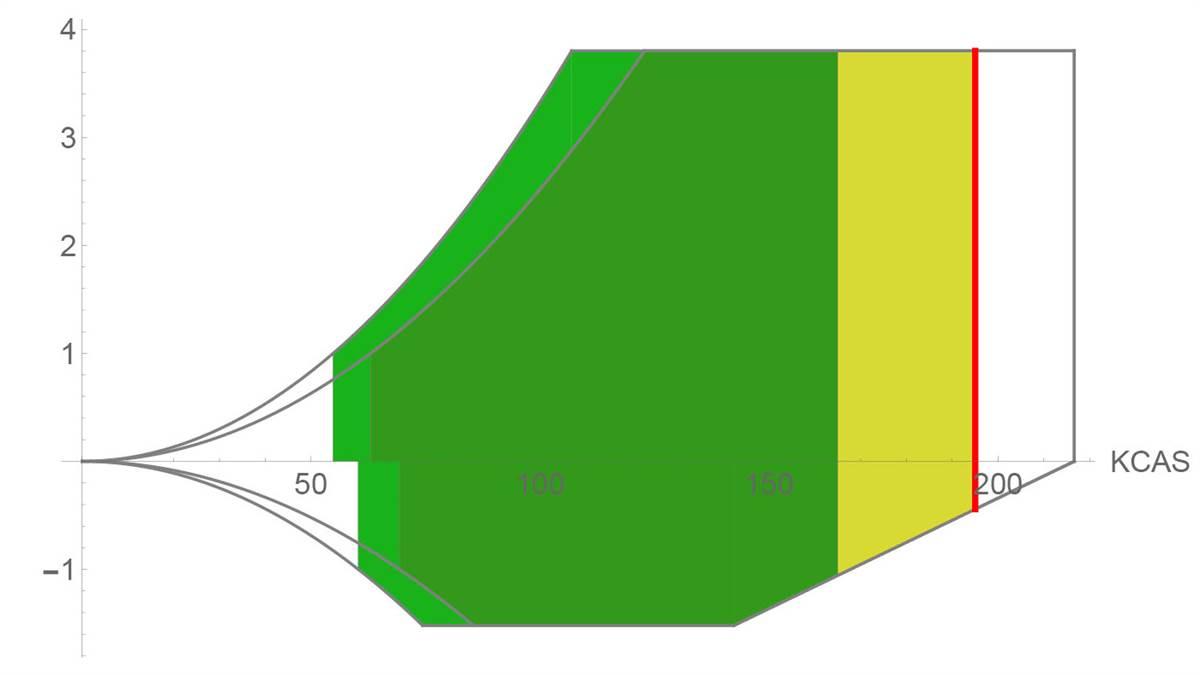 V-n diagram (maximum gross and lighter weights. The curves from the graph on p. 87 form the upper left part of the maneuvering (or V-n) diagram. Note that the lighter aircraft has a larger envelope and is shown using the lighter green shading.

An aircraft wing stalls when it reaches its critical angle of attack and the airflow across the top of the wing separates. Beyond the critical angle of attack, the lift created by the wing decreases drastically. A stall can occur at an airspeed that is slower or faster than the published stall speed, indicated by the bottom end of the green arc on the airspeed indicator. This published (1 G) stall speed is determined by slowly decelerating the aircraft, typically at maximum gross weight and full forward center of gravity, and noting the speed at which the stall occurs. An abrupt pull on the yoke will induce a stall at a higher airspeed and result in a load factor greater than 1 G. Loading an aircraft below maximum gross weight or with a center of gravity aft of the forward limit will result in a lower stall speed. You may notice with your own airplane that the stall rarely occurs exactly at the published value. We’ll refer to VS as the speed at which a stall would be achieved after a slow deceleration in its given configuration.

Interestingly, the load factor incurred by abruptly pulling back on the yoke at a particular airspeed turns out to depend only on VS. It’s n=V2/ VS2, where V is the calibrated airspeed at the start of the maneuver. The graph on p. 87 shows this relationship and you might recognize it as forming the upper left part of the maneuvering diagram (above). Note that as airspeed increases, the load factor rises sharply. For example, an aircraft with a published stall speed of 46 knots that abruptly stalls at a speed of 90 knots will register a load factor of 3.8 Gs. So 90 knots will be the maneuvering speed, the maximum speed at which the load factor at the stall will not exceed the (Normal category) limit load factor of 3.8 Gs.

The maneuvering envelope provides a critical tool in planning for the safe execution of snap rolls. Abruptly applied loads are harder on aircraft structures than those gradually applied. For this reason, I plan a 3-G snap roll even though the acrobatic aircraft is certified to 6 Gs. Knowing that using the wrong entry airspeed could result in an excessive load factor, Louise and I used our weight and CG position to find that a snap roll with entry speed of 80 knots would incur a load factor of 3 Gs. During the flight, we climbed to altitude, cleared the area, and pitched the nose of the aircraft slightly upward. When the airspeed reached 80 knots, we abruptly pulled back on the yoke to stall the wings, applied full left rudder and watched the world go around. After 270 degrees of rotation, we recovered from the spin with forward pressure and opposite rudder. Louise smiled when she saw that the accelerometer read 3.0 Gs, exactly what our calculation predicted.

Although your next flight will almost certainly not involve snap rolls, the topic offers important information for proper aircraft care. Any maneuver that requires authoritative control movements should be performed at or below maneuvering speed—which almost always is less than the published value in the operating handbook. The Airplane Flying Handbook warns that aircraft strength requirements do not cover multiple control movements, in the same or different axes of rotation. To be kind to your aircraft, know its actual maneuvering speed and choose control inputs with care. List the maneuvering speed for three different weights on your checklist so that you can quickly and easily slow to an appropriate airspeed before any abrupt control movements. Doing so will help to ensure many happy years for both you and your airplane.

Catherine Cavagnaro owns Ace Aerobatic School in Tennessee (www.aceaerobaticschool.com), and is professor of mathematics at Sewanee: The University of the South.