Get the app Get the app
Already a member? Please login below for an enhanced experience. Not a member? Join today
News & Media Pulling socks with drones

Stringing high-voltage power lines between towers is specialized and challenging work traditionally done by helicopters. A North Dakota company has demonstrated that drones can pull off a sock pull with less risk and expense. 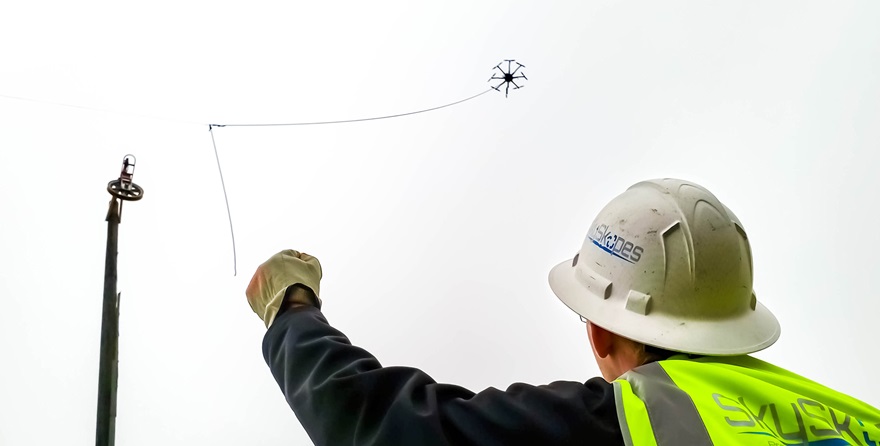 For anyone outside of the energy industry, the term “sock pull” may sound like a companion prank to “short-sheeting” a roommate's bed, or a warm-up exercise at a slumber party. It describes the high-wire act of stringing lightweight lines known as “socks” over pulleys and stretching the rope to the next tower so that the much heavier power cable can then follow.

This tricky work is a step beyond the inspections that gave companies like SkySkopes of Grand Forks, North Dakota, an entry into the energy industry. CEO Matt Dunlevy and the company's pilots have been inspecting infrastructure, including gas lines and power lines, for years, measuring snowfall accumulation and vegetation encroachment, sniffing for gas leaks, and collecting images from visible cameras and LIDAR units. In early 2018, they cut their teeth on their first drone sock pull, bellying up to 765-kilovolt towers and managing a long list of risks particular to such a high-energy, obstacle-rich, and dynamic environment.

Getting there involved much more than simply acquiring more muscular drones able to manage heavy lifts in a windy environment where precision counts.

Dunlevy already had well-trained pilots, all of whom have certificates to fly both manned and unmanned aircraft. Before pitching sock pulling with drones to energy companies, Dunlevy had to prove the technology was up to the task. He created a practice area complete with a customized transmission tower to train on. While no special waivers or certifications are required to pull sock under FAR Part 107, this was uncharted territory, and quite a bit trickier than the work typically done by drones. 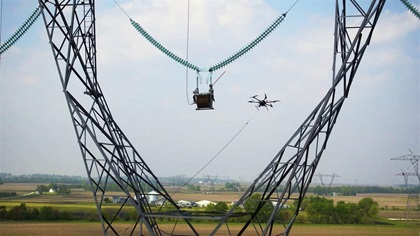 Pilots are chosen for sock pull duty based on their experience, certifications, and demonstrated skill. Threading a drone between the arms of a tower in an environment full of metal structures and cables is not casual maneuvering by any measure. The payload gets heavier as the line pays out, and the wind can pose a much greater challenge working around so many obstacles and limited clearance.

To oversimplify a sock pull, a drone lifts a lead line, and flies it to a pulley. The drone eases the line into a guide rail and then lowers it, guiding the line carefully into a gate. Once the line is in position, a tug on the rope is required to snap it into the gate, much as a mountain climber clips snaps a rope into a carabiner.

Precise aircraft control is a must in order for the snap to occur. The heavy lifting comes next.

SkySkopes uses a second drone to provide greater situational awareness and to help guide the lead pilot precisely to the next target while remaining clear of the tower structure and other cables. Think of the second pilot as an airborne visual observer. The second drone also serves as a capable camera platform to document each job. The two pilots usually stand next to each other. Dunlevy said that communication and teamwork are critical when flying these complex operations, designed with help from engineering professors at the University of North Dakota.

“They were my litmus test,” Dunlevy said.

A logistical concern unique to pulling sock is that the payload gets heavier as the line unspools. So, while the batteries begin to discharge, the demand on them increases as the mission progresses. The 55-pound weight limit imposed by Part 107 comes into play, so the aircraft can reach its regulatory limit even if it still has lift to spare. (Speaking of that, Dunlevy’s drone of choice these days is the Watts Innovations MFD 5000, which “flies like a dream,” he said. Built to be an industrial workhorse, the six-rotor aircraft produces about 150 pounds of thrust, giving it a considerable advantage for sock-pull duty over other unmanned systems of similar size.) 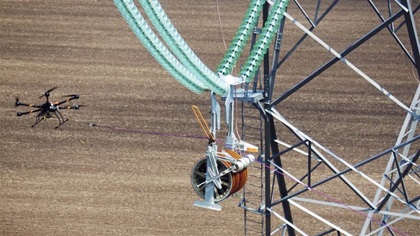 Despite the obvious limits of lifting capacity and endurance, drones can be the tool of choice in certain circumstances. Utility engineers consider mission environment (including altitude, terrain, and personnel safety) when choosing whether a manned helicopter or a drone fits the mission. Some utility industry firms have developed in-house drone expertise, and forged partnerships with the FAA to share data and knowledge that benefits the industry.

As drones fly beyond the first steps into this industry (short-range inspection work), a consensus has emerged among pilots (manned and unmanned) that drones will be useful tools in certain niche applications, but they’re unlikely to replace helicopters as the primary sock-pulling tool of choice. Dunlevy hopes that manned operators will integrate drones into their work, not view them as competition.

“Manned helicopter pilots should see UAS as another arrow in their quiver,” Dunlevy said. “Drone-based line pulling is all about the safety factor.”

Embry-Riddle Aeronautical University professor Jerry Kidrick agrees with that sentiment. A helicopter pilot and instructor with more than 5,000 hours flown, he teaches his students about the “dead man’s curve” environment that poses a high level of risk: flying low and slow, and pulling cable. There is little room for error, and dim prospects of recovering from a main rotor strike, engine failure, or tail rotor issue.

“I don't think there's any doubt that it would be safer to use drones to do those (low-level) missions,” Kidrick said, noting that the mission remains very much a niche application. “There are plenty of helicopter jobs out there.”

Peter Renggli flies helicopters for Bonneville Power Administration in the Pacific Northwest. Some of the 8,000 hours in his logbook came from flying tourists into the Grand Canyon and Zion National Parks (and occasionally rescuing people from those same places). Now seven years into his current job, Renggli says helicopters are the go-to for line pulling and many other utility missions. Bonneville Power Administration operates four helicopters for these and other missions. Renggli is also a certificated remote pilot and, as Dunlevy suggests, has embraced the notion of letting mission specifics determine when drones come into play. While they can be a good fit for the task at hand, he doesn’t see drones replacing helicopters any time soon.

“Maybe 20 years from now, that could be the case, but for the foreseeable future, they’re going to be utilized hand-in-hand,” Renggli said. “If we can’t use a helicopter, we pull out the drone and get the job done. My project this winter is to write, implement, and develop our UAV program across the department. We’re getting into it heavily.”

SkySkopes has had success in this new line of work, and considers the concept proved well enough to expand. Dunlevy says several things need to occur for drone sock pulling to become more common. Battery technology needs to improve to allow longer flights. Regulations are also an obstacle in some situations, precluding the crossing of roads and setting a payload weight limit that limits the distance a drone can pull the sock. Helicopters still have a comfortable edge in many cases. On the flip side, drones are much less expensive to stage and operate, and they limit potential for injury or loss of life should a mishap occur.

Though sock pulls are very much a niche mission for the time being, Dunlevy expects drones will become a viable go-to option for pulling sock.

“Drone-based line stringing as a service is a multi-million dollar industry worldwide,” Dunlevy said. “The drones are easily repurposed because one safe bet is that there is a new mission coming up for every different type of drone every other week.”