Get the app Get the app
Get the latest news on coronavirus impacts on general aviation, including what AOPA is doing to protect GA, event cancellations, advice for pilots to protect themselves, and more. Read More
Already a member? Please login below for an enhanced experience. Not a member? Join today
News & Videos AOPA eightieth anniversary includes Pilot Passport prizes

The top 80 pilots using the Pilot Passport function on the AOPA app to check in during AOPA’s eightieth anniversary year will receive the 288-page coffee table book Freedom to Fly: AOPA and the History of General Aviation in America, plus an additional prize. 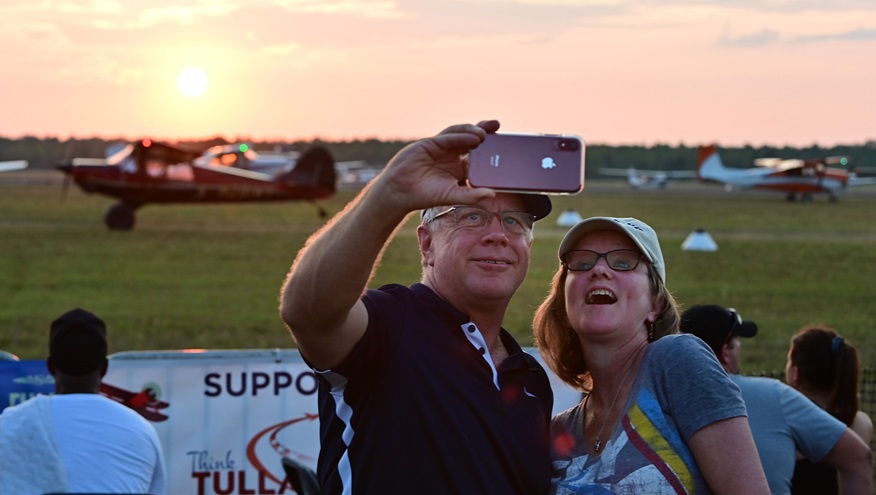 AOPA Tullahoma, Tennessee, Fly-In participants use a phone camera to take a photo during the short takeoff and landing demonstration. Photo by David Tulis.

In addition, the top three all-time pilot check-ins will be awarded an AOPA Tactical Jacket valued at $144 from the AOPA Pilot Gear Store. The versatile clothing item is a great addition to a pilot’s winter, fall, or spring wardrobe, and it could be yours just for using the Pilot Passport check-in feature in the AOPA app.

The community of pilots using the interactive check-in feature is continuing to grow and has recorded some impressive numbers since the feature was unveiled in April. To date, pilots using the Pilot Passport feature have recorded almost 50,000 check-ins, earned more than 13,200 badges, and uploaded more than 3,200 photos.

During the AOPA Tullahoma Fly-In Sept. 13 and 14 in Tennessee, users who checked in with the Pilot Passport feature on the AOPA app received a surprise bonus of 2,000 points. Extra check-in points are awarded during fly-ins, airshows, and special aviation events, as well as for visiting historical aviation locations.

There is a different challenge every month, and in September pilots were encouraged to check in at as many airports as possible. I checked in at seven airports across four states, including Tullahoma Regional Airport during the AOPA Fly-In, Lonesome Pine Airport in Virginia, Concord-Padgett Regional Airport in North Carolina, and Clearview Airpark in Maryland, among others.

For the October challenge a $50 AOPA Pilot Gear package will be awarded to the three participants who earn the most state badges through Pilot Passport during the month. Additional prizes will be awarded for pilots filing their flight plans through AOPA partner ForeFlight.

Don’t forget that bonuses and other surprise badges could help propel you to the top of the all-time check-in standings when they are tallied following AOPA’s year-long eightieth anniversary celebration.

Membership: We can help