Get the app Get the app
Get the latest news on coronavirus impacts on general aviation, including what AOPA is doing to protect GA, event cancellations, advice for pilots to protect themselves, and more. Read More
Already a member? Please login below for an enhanced experience. Not a member? Join today
News & Videos TBM owners share fellowship, safety

Daher’s TBM series of single-engine turboprops are as fast as they are capable, so their pilots have cultivated a culture that encourages training beyond the minimum. 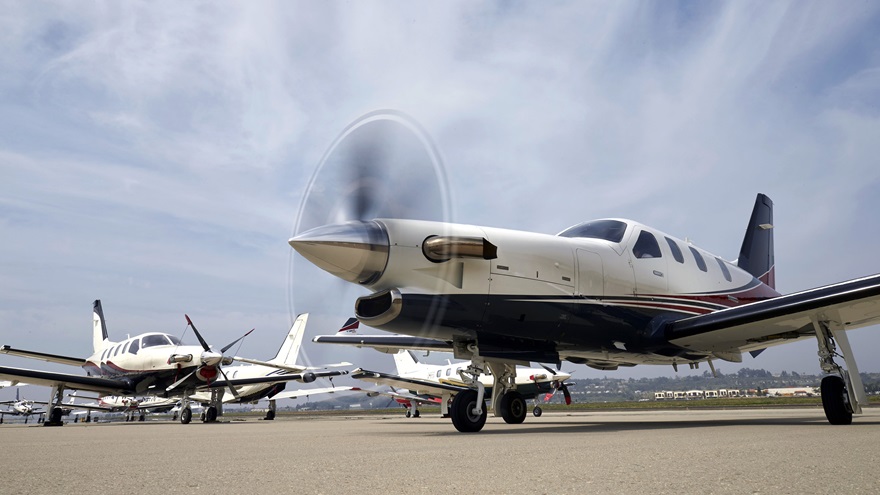 The 2019 TBM Owners and Pilots Association convention drew 120 of Daher's single-engine turboprops together in Denver. Photo by Mike Fizer.

It’s not enough to go through the Daher-endorsed, simulator-based Simcom pilot initial and recurrent courses. With this in mind, the TBM Owners and Pilot Association (TBMOPA) conducts annual conventions with heavy emphasis on operational tips, safety topics, and late-breaking equipment news.

This year’s convention—the sixteenth—took place September 25 to 28 at Denver’s Marriott Denver Tech Center hotel and convention center. In all, 120 TBMs flew into Denver’s Rocky Mountain Metropolitan Airport and Centennial Airport for the event. Total attendance was estimated at 360 owner-pilots—and their spouses, children, significant others, and guests. An exhibit hall featured some 30 vendors catering to every owner’s possible need, from avionics and maintenance to very well-trained, well-behaved German shepherd protection/companion dogs for $90,000. (Dog lovers: visit svalinn.com).

In addition to seminars on GPS/WAAS technicalities, human factors in the glass-cockpit environment, insurance, and customer support, there was noteworthy emphasis on pilot technique and accident analysis, plus a review of the TBM’s Pratt & Whitney PT6A-66D operational issues.

Yet another course, conducted under the auspices of the TBMOPA Foundation under its TBM Initiative for Pilot Safety (TIPS), puts the emphasis on scenario-based simulator training with about 150 different in-flight environmental and procedural curveballs, from fuel management to weather challenges to task-loading. What “non-optimal” safety issues does SIMCOM see among TBM pilots? One is a failure to perform a complete preflight. For example, Lucas pointed out that many pilots don’t sump their fuel drains nearly often enough. “Why? They’ll say that the valves stick,” according to Lucas. “Well, the reason they’re sticking is that they’re corroded and gummed up by undrained water, which has pooled up in the tank sumps.”

Checklists are also breezed over, because “they’re too long and repetitive.” Lucas said this makes it easy for some to skip the standby generator and feather tests, for example.

The need for more practice in hand-flying is another shortcoming with some pilots. Ditto briefing approaches and missed approaches, and doing practice approaches that go beyond the minimum proficiency requirement of six approaches every six months.

Nicolas Ducharme of Pratt & Whitney gave an update that touched several aspects of the PT6 engines used in TBMs. We all know that Pratts have a reputation for being virtually bulletproof, and one of Ducharme’s bullet points drove that home: The highest-time PT6 in the TBM fleet just passed 13,266 hours in service.

FOD can be a big-league headache for operators. Most likely to suffer damage are the blades in the first compressor wheel—the first wheels to meet intake air. TBMs have intake particle separator doors that deflect FOD such as dirt, debris, or ice particles away from the engine intake airflow, but it seems that some pilots may be late in opening the inertial particle separator (IPS) doors when conditions dictate—such as during ground operations, before landing, and when flying in icing conditions.

The result is a loss of performance that most often is only seen at altitude. The airplane may not meet book power output numbers. Ducharme did mention one tipoff that could alert pilots of compressor blade problems when on the ground. Some pilots and ground personnel have noticed a distinct whining sound—unlike the sounds of normal spool-ups—during engine starts. An examination found that the whining correlated with blade damage. Recommendations: Take off your headset during engine starts so you can hear any abnormal sounds.

How much can repairing FOD cost? As much as $400,000 when you consider parts replacement, labor, consumables, and a test flight. Then there’s the possibility of a hike in your insurance premiums, and a drop in the resale value of the airplane.

The company also announced an upcoming, $479, predictive oil analysis program that’s set to debut in 2020. Oil samples are collected one to two times per year and their results are evaluated and compared with the results of the rest of the PT6 fleet. This can help owners forestall damage by acting proactively and scheduling maintenance to correct any suspect problems.

In another bit of PT6 news, Pratt & Whitney said that TBM owners were authorized to mix high thermal stability (HTS) oil with the 2380 turbine oil normally used in TBM engines.

Want to avoid a prop strike and use less runway when landing? One seminar laid it all out. Fly a stabilized approach and flare with a nose-up attitude of no less than three degrees—six degrees is ideal. Any attitude less than three degrees—at full flaps—puts you at risk of a prop strike (sitting on the ground, the TBM’s nose-up attitude is a meager 1.7 degrees nose-up). The ideal, “sweet spot” touchdown combination is a threshold airspeed of 85 to 90 knots with a pitch attitude of five to seven degrees nose-up, according to presenter Dierk Reuter. With this setup landing distance can be as low as 700 feet. At light weights, Dierks said you could even fly down short final at 75 knots and land in style.

AOPA was also at TBMOPA, represented by AOPA President Mark Baker; Senior Vice President of Media and Outreach Tom Haines; and AOPA Foundation Vice President Jennifer Storm. The emphasis was on AOPA’s many initiatives to represent pilot interests, strengthen the pilot population, and make the pilot community safer. Storm explained that AOPA dues don’t cover all the AOPA Foundation’s safety and educational programs. The Ray Foundation and its matching grants contribute to most of those efforts. Donations are welcome, of course, and to date more than 5,000 have answered the call. With the proceeds, programs assisting flying clubs, training lapsed “Rusty Pilots,” and providing funds for high school aviation curricula and scholarships for flight training can continue in full force.

Haines urged continued vigilance on the challenges surrounding FAA funding. The FAA may have been reauthorized for the next five years, Haines said, but after that it’s fairly certain that forces urging the privatization of air traffic control will resurface.

Baker outlined his campaign for transparency in fixed-base operator fuel pricing and ramp fees, saying that these charges should be published—and that public ramp space should be charted so that pilots could know how to avoid unwanted fees. So far, Baker said, AOPA has received more than 1,400 complaints about egregious pricing. “Is this the only industry where you find out a charge only after you’ve incurred it?” he asked. “I think so, and we intend to change that.”

Like most aviation conventions it wasn’t all business. There were companion flights that gave spouses and others ground school and dual flight instruction. One evening there was dinner at the Broncos Stadium. Dick Rutan gave a highly informative inside look at his 1986 around-the-world flight in the Rutan Voyager. And boisterous post-dinner bidding put up everything from a set of tires (they went for $2,400) to weekly passes at EAA AirVenture with golf cart and recreational vehicle motor home (winning bid: $17,000) up for auction.

Next year, the TBMOPA convention will be held in Montreal. The following year the show will be at the Greenbrier resort in White Sulfur Springs, West Virginia.

AOPA Pilot Editor at Large
AOPA Pilot Editor at Large Tom Horne has worked at AOPA since the early 1980s. He began flying in 1975 and has an airline transport pilot and flight instructor certificates. He’s flown everything from ultralights to Gulfstreams and ferried numerous piston airplanes across the Atlantic.
Go to Thomas A. Horne's Profile
Topics: Turbine Aircraft