Get the app Get the app
Get the latest news on coronavirus impacts on general aviation, including what AOPA is doing to protect GA, event cancellations, advice for pilots to protect themselves, and more. Read More
Already a member? Please login below for an enhanced experience. Not a member? Join today
News & Videos AOPA's Horne wins lifetime achievement award

AOPA Pilot Editor at Large Tom Horne at first looked perplexed and then surprised when his name was called from the podium at the National Business Aviation Association/General Aviation Manufacturers Association media kickoff breakfast. NBAA Chairman Gen. Lloyd “Fig” Newton announced that Horne was the recipient of the 2019 David W. Ewald Platinum Wing Award for his lifetime achievement in journalism. 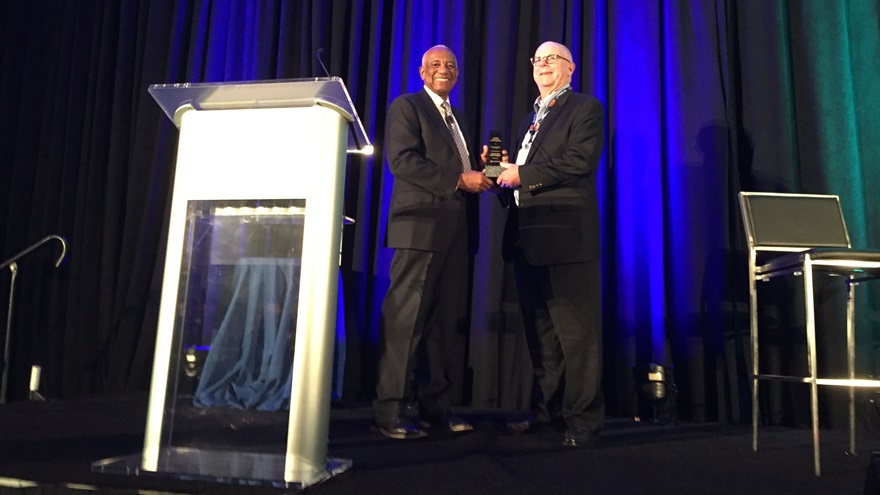 AOPA Pilot Editor at Large Tom Horne, right, received the 2019 David W. Ewald Platinum Wing Award for his lifetime achievement in journalism at the National Business Aviation Association/General Aviation Manufacturers Association media kickoff breakfast during the NBAA convention in Las Vegas. Photo by Tom Haines.
As Newton noted, the Platinum Wing Award—which is not presented annually—marks the contributions over a career in journalism that have made the business aviation industry a community and is named for the late David Ewald, who helped create Business & Commercial Aviation magazine and co-founded Flight Training magazine. Previous recipients include David Collogan, Bill Garvey, and Paul Lowe. 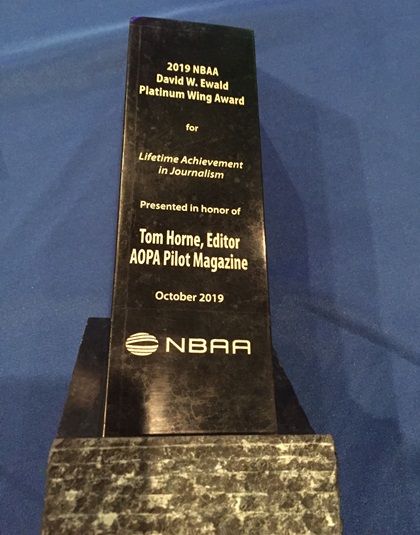 Horne has been writing for AOPA publications for 40 years and for the last decade has been the editor of the Turbine Edition of AOPA Pilot magazine, which focuses on the owner-flown turbine market. “Tom has championed safety in business aviation—including for single-pilot turbine flying—developing articles based on the latest studies and expert analysis,” Newton said. Horne is also an aviation weather expert. He has written a book on the subject, Flying America’s Weather, and hundreds of WxWatch articles in the magazine.

Also at the breakfast, James Wynbrandt was honored with NBAA’s 2019 Gold Wing award for an in-depth article about sustainable aviation fuel and efforts industrywide to promote the use of these new “green” fuels.

His article, published in Business Jet Traveler, not only explains the science and economics of sustainable aviation fuel in plain English, it also makes clear that it is a drop-in fuel—available today—and it is safe and approved for every engine that runs on Jet A. Wynbrandt did extensive research and made clear that the fuel is truly sustainable, reducing overall carbon life-cycle emissions by 50 to 80 percent, said Newton.

Editor in Chief
AOPA Editor in Chief Tom Haines joined AOPA in 1988. He owns and flies a Beechcraft A36 Bonanza. Since soloing at 16 and earning a private pilot certificate at 17, he has flown more than 100 models of general aviation airplanes.
Go to Thomas B Haines's Profile
Topics: National Business Aviation Association, Awards and Records