Just over a month after admitting to mistakes that caused the demise of the short takeoff and landing monster known as Draco, owner Mike Patey announced plans to resurrect the backcountry beast and "improve everything." 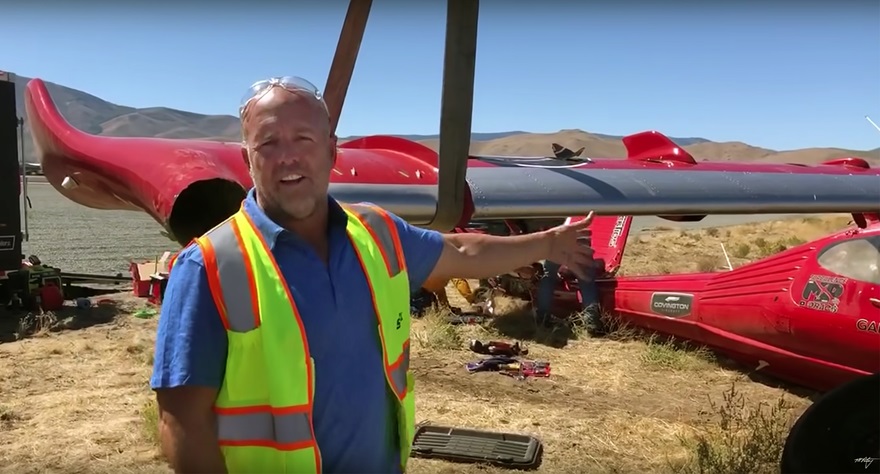 During an Oct. 23 YouTube video, 'Draco' owner Mike Patey vowed to "improve everything, from the wing to the power plant to the landing gear" for his next turboprop-powered short takeoff and landing aircraft. Photo courtesy of Mike Patey via YouTube.

He said, “We’re going to make it even better” than the original Draco, which captured attention inside and outside of the aviation community after the super STOL aircraft stormed onto the scene with a screaming turboprop engine and flashing LED lights during EAA AirVenture in 2018.

Patey, his wife, and a close friend survived an accident in the red high-wing turboprop as they were departing Reno/Stead Airport following the Stihl National Championship Air Races September 16. The weather in Reno, Nevada, that day had turned other pilots away.

"I should have waited," Patey told his online audience at the time. "I screwed up, made some bad choices, and as a result, I risked my family and friend. Draco's gone. That sucks. I hope you all learn from it."

Apparently, he has. Patey vowed to “improve everything, from the wing to the powerplant to the gear” during an online video he posted October 23.

He said the drawing board again begins with a PZL–104 Wilga, a Polish-made airplane designed with piston power in mind. Plans include larger wings with an additional wing spar and a lengthened chord, higher gross weight, increased range, and more fuel capacity. “Beyond that, we’re going to give it near 1,000 [shaft] horsepower,” a 40-percent increase over Draco’s 680-shp Pratt & Whitney PT6A-28 powerplant.

Patey explained that his lofty goals for the new Draco X included helicopter-like capability combined with fixed-wing turboprop performance. “I want to fly faster than a helicopter,” climb “to 28,000 feet” above most weather, fly “further than a helicopter,” land in a confined area of 50 feet by 100 feet, “and I want to be able to do that with four big guys” and "all their gear."

Online reaction to the news was swift and generally positive. “I can’t believe how emotional I am about an aircraft I’ve never seen in person and a pilot/creator I’ve never met. Great news!” posted one supporter to his YouTube channel. Others volunteered their time and resources to help rebuild the iconic aircraft.

“We’re about ready to step it up to a whole new level,” Patey vowed in the video.