Get the app Get the app
Get the latest news on coronavirus impacts on general aviation, including what AOPA is doing to protect GA, event cancellations, advice for pilots to protect themselves, and more. Read More
Already a member? Please login below for an enhanced experience. Not a member? Join today
News & Videos Five Questions: Susan Bell

She loves her pink ‘plane baby’

Susan Bell works at NASA’s Jet Propulsion Laboratory in Pasadena, California, where she spends a lot of time with the public talking about Earth science. She has put her piloting background to work flying a mission studying snowpack in California to improve water management. Her general aviation background is as varied as her career: Bell is a certificated flight instructor, has a commercial glider certificate, and competes in aerobatic competitions in her blue-and-pink Extra 300. She won the U.S. National Sportsman Aerobatic Championship in 2018. 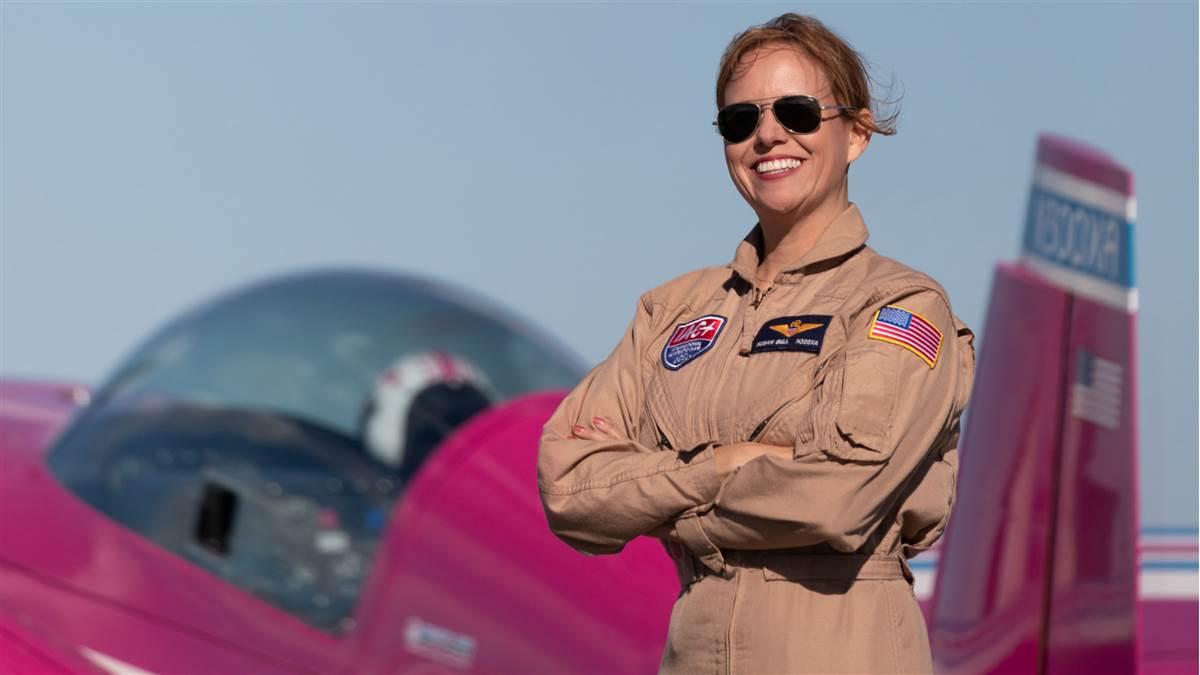 How did you get started in aviation? Growing up I wanted to be an astronaut and even went to Space Camp in junior high, but had no exposure to aviation. I ended up pursuing a career in the film and television industry, which in turn led to my current communications work for NASA’s Jet Propulsion Laboratory. I was already in my 30s when I visited NASA Dryden Flight Research Center, and there it dawned on me that most astronauts were also pilots. I completed my private pilot training in four short months with the Alameda Aero Club at Metropolitan Oakland International Airport.

Favorite aircraft? My Extra 300. After my initial year flying International Aerobatic Club regional contests, I knew I needed to get my own plane to progress. I went looking for a single-seat Pitts, but this beautiful pink, blue, and white 1990 mid-wing Extra found me. It was a lot of plane to learn how to fly, but I love my “plane baby.” A high-performance, aerobatic aircraft like an Extra 300 becomes an extension of the pilot and there’s nothing quite like rolling and spinning around the skies strapped into one.

Early challenges? I’d say my most challenging flight so far was my second flight at the U.S. National Aerobatic Championships in 2018 in Oshkosh, Wisconsin. It was my first trip to nationals, and, after the known [compulsory] flight, I was in second place out of 19 pilots in the Sportsman category. I needed to fly as perfect a free program as I could to come out on top, and it became a mental game to stay focused and not let my nerves affect my flying. Believing in yourself, that you’re prepared because you put in the work, is important—whether at a contest or on a checkride.

Favorite aviation-related activity? As you may have guessed, I love flying aerobatics! But I also enjoy doing outreach to other pilots interested in the sport, as well as encouraging girls and women to pursue aviation as a hobby or career. It is so empowering when you achieve your goal of becoming a pilot, then continue on to accomplish other ratings and certificates, and learn to fly different types of aircraft.

Advice for student pilots? Don’t let your fears hold you back. I was just as scared as you may be now when I practiced solo power-on stalls or landed in a stiff crosswind when learning to fly. The first time I pulled the stick back and stomped on full rudder to initiate a spin got my heart racing, too. Find an experienced instructor and a capable airplane and go conquer those fears. Never stop learning.