Get the app Get the app
Already a member? Please login below for an enhanced experience. Not a member? Join today
News & Media PAC mentality

Safely fly a go-around with power, attitude, and configuration

When is a go-around/rejected landing needed? Why do some pilots improperly execute a go-around? What is the appropriate sequence of steps to safely fly this maneuver? While conducting flight reviews I’ve found some pilots are unable to correctly answer these questions. 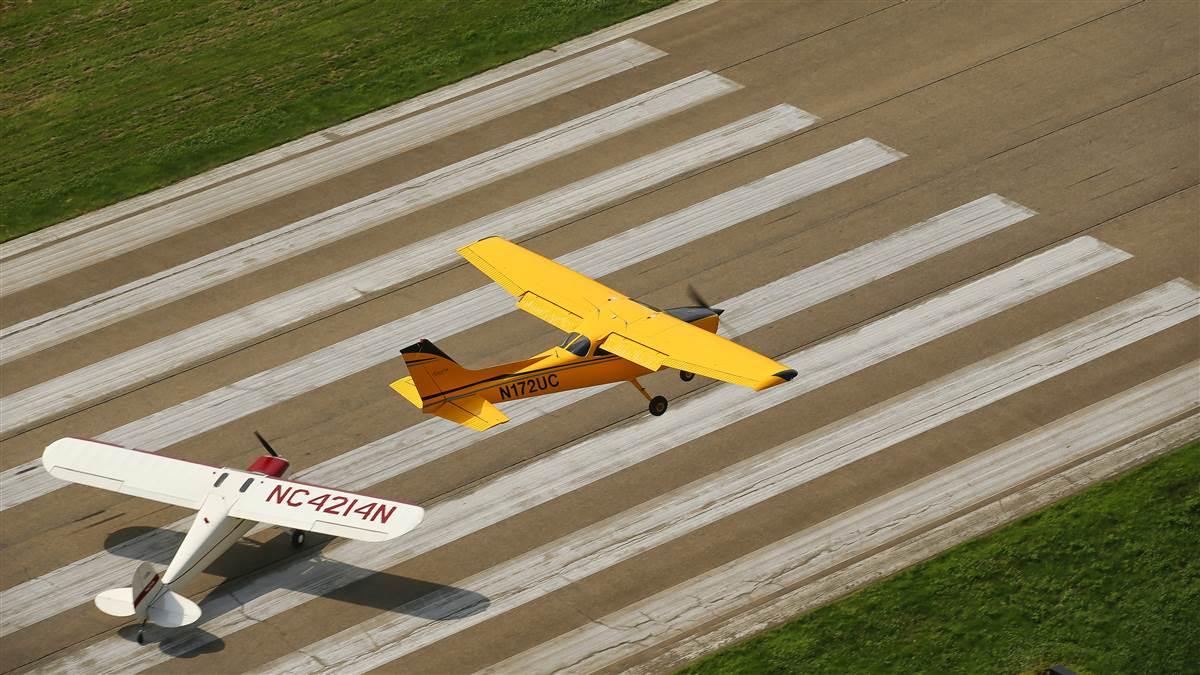 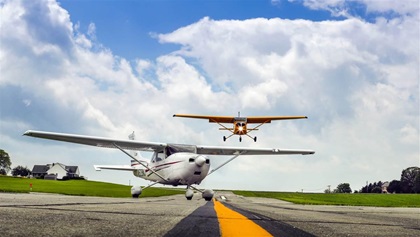 When in doubt, go around

Reasons to execute a go-around range from a hazard such as an aircraft on the runway to overshooting final approach (see “When In Doubt, Go Around,” sidebar). Pilots should adopt the mindset that a go-around/rejected landing is a normal maneuver and an alternative to nearly any approach and landing. Also, knowledge of energy management concepts is needed when flying this maneuver.

Rejected landings can be considered potentially dangerous only when delayed unduly and/or performed improperly. Delays in performing this maneuver appear to be the result of landing expectancy—for instance, a pilot perceives conditions on short final are not as threatening as they are and believes the approach and landing can be safely performed—and pilot ego or pride, such as the erroneous belief that going around for another landing is a display of failure and incompetence. As described in the Airplane Flying Handbook, to safely fly a go-around, perform three steps in the following order: power, attitude, and configuration. This correct sequence of steps may be remembered by the acronym PAC.

Immediate application of full takeoff power is top priority for performing a go-around/rejected landing. Power adds energy to the airplane to increase kinetic energy (airspeed) and potential energy (altitude). Some mistakenly believe they should apply partial power, for example 75 percent; this is not correct. The descending inertia of a landing airplane must be overcome before it descends to the ground. To do this, appropriate kinetic energy must be promptly restored and increased for the airplane to climb and turn safely away; this can best be accomplished by smoothly applying full power.

Because of increased elevator pitch-trim setting employed on final approach, application of full power can result in the airplane’s abruptly pitching up, increasing the angle of attack (AOA). In this situation the pilot may need to apply appropriate forward stick or yoke pressure to prevent kinetic energy (airspeed) from eroding precipitously and exceeding critical AOA and stalling, leading to an inflight loss of control stall-spin accident. Elevator trim needs to be reset as soon as possible following application of full power to keep from exceeding the critical AOA. In addition, a sudden nose-up attitude predisposes the airplane to yaw to the left because of asymmetric propeller loading (P-factor). If the airplane stalls and yaws, it will spin. Appropriate right rudder pressure must be applied immediately to counteract asymmetric propeller loading and torque (rotational force). Pitch attitude should initially be set to a near level to allow kinetic energy to increase from final approach airspeed (generally 1.3 times stalling speed in the landing configuration) to best rate of climb airspeed (VY). Subsequently, pitch attitude should be regulated to maintain VY and safely climb away. 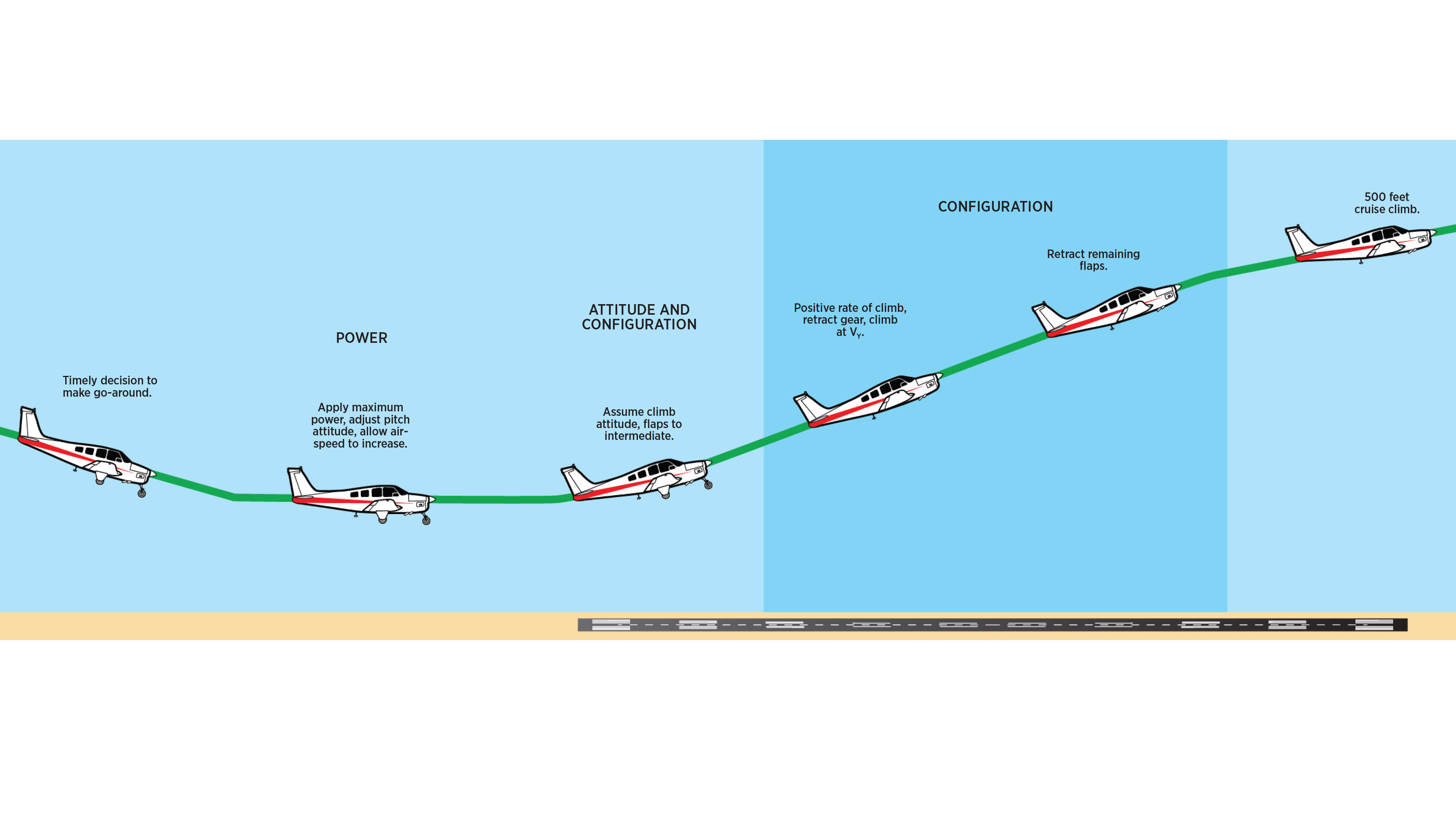 A mishandled go-around can prove fatal

Following a botched landing attempt, a Cirrus SR22 impacted terrain in Caldwell, New Jersey, in 2010, in clear weather and calm winds while attempting a go-around/rejected landing, resulting in three fatalities. Witnesses stated the airplane was flying too high (excessive potential energy) and too fast (excessive kinetic energy) on short final and touched down about halfway down the airport’s 4,552-foot runway. After a bounce was observed, the pilot aborted the landing and attempted to climb out with flaps fully extended; it is unclear if full power was applied. Subsequently, the airplane pitched up and entered a left-turn spin before abruptly descending in a steep, nose-low attitude and impacting the ground. The National Transportation Safety Board cited contributing factors to this fatal inflight loss of control accident were the pilot’s continuance of an unstabilized final approach and the improper use of flaps during the go-around/rejected landing. —MJB

A go-around/rejected landing must be understood as a possible maneuver of any flight, despite the fact that it’s not used for every landing. Pilots need to train the way they fly, and regardless of their certificate level, pilots should regularly train to correctly fly a go-around to remain sharp for what could happen.

Michael J. Banner, is a CFI and MEI, courtesy professor at the University of Florida in Gainesville, and check pilot and instructor pilot with the rank of major in the Civil Air Patrol. He has 5,500 hours flight time and owns a 7GCBC Citabria.