Get the app Get the app
AOPA will be closed on Friday, July 3, 2020, in observance of Independence Day.
Already a member? Please login below for an enhanced experience. Not a member? Join today
News & Videos Technology: Solo in the sim

Pattern A. Ugh. Designed to develop basic instrument flying skills, Patterns A and B are valuable exercises in timing turns, maintaining heading, and using the skills necessary for holds, procedure turns, and approaches. They’re also 14 minutes each of mind-numbing monotony. 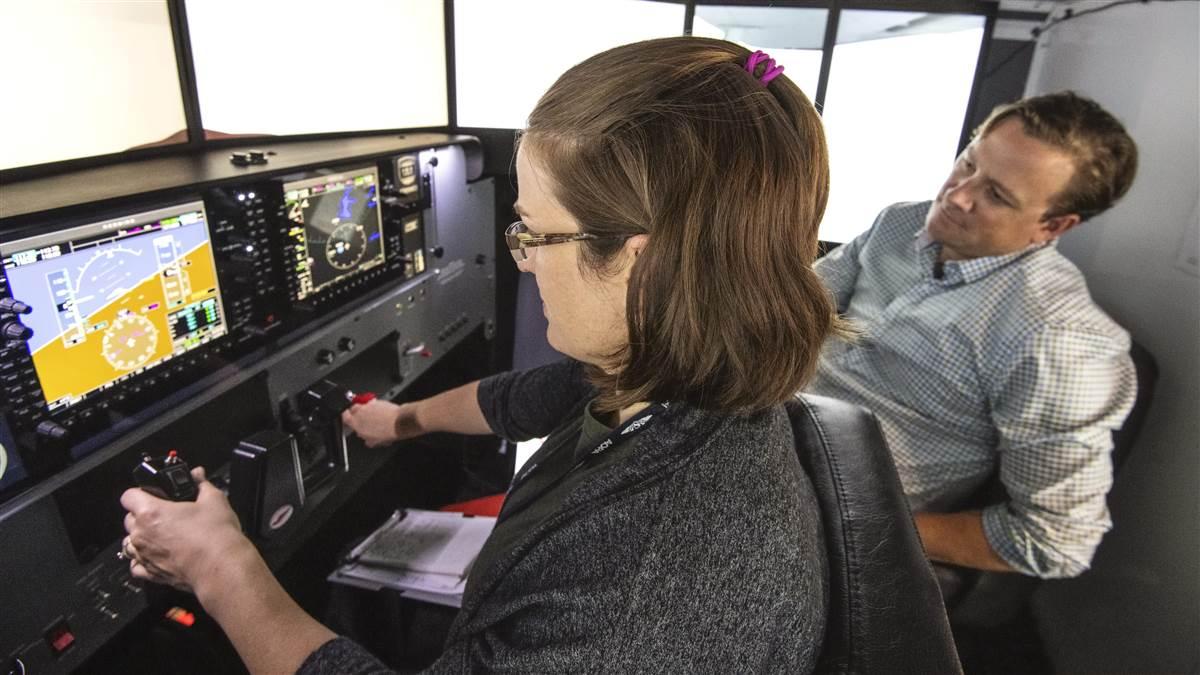 Not only did the Redbird team program more than 100 potential variations for each approach—including entry type, winds, instrument failures, and with or without coaching—but they had to develop a scoring scheme that feels right. For example, the airman certification standards specify that an instrument applicant must fly the final approach segment of an approach no more than plus 100 or minus zero feet. If a pilot sees a negative trend in altitude and corrects, but dips five feet below a minimum altitude for one second, a human examiner likely will consider it successful completion of the task. Feed the airman certification standards into a computer, however, and it sees red. So, Redbird programmed GIFT to consider trend data: If the pilot makes a minor deviation while in the process of correcting, he or she won’t be met with the dreaded “Outside ACS” on their scorecard. —SD

Instrument-rated pilots may now accomplish required recency experience in a flight simulator or aviation training device without an instructor’s presence, thanks to a batch of regulatory changes implemented in 2018 that allow broader use of technology to reduce the cost of flight training and maintaining proficiency. AOPA advocated for the changes, which are expected to save the general aviation community more than $110 million in five years.

Suffering through these exercises as an instrument student is bad enough; I can only imagine what it’s like for an instructor twiddling his thumbs in visual conditions while I get the rust off my straight-and-level skills. In that sense, Redbird Flight Simulations’ Guided Independent Flight Training (GIFT) instrument rating program, unveiled at EAA AirVenture on July 22, really is a gift—to burnt-out flight instructors, and to the instrument students paying them for their time.

Simulators are now well established as training tools, particularly in the procedural world of instrument flying. But the dynamic in the simulator is typically similar to that in the cockpit: student and instructor side by side, with the instructor observing and offering feedback, much of it rote. Watch your altitude. Check your airspeed. Right rudder. With its GIFT programs, Redbird delegates some of those instructor tasks to the software.

The IFR program follows the basic format established with the private pilot program, which launched in 2017: Students review the online video and written overview for each GIFT mission at home, go over it with the instructor, and then are set loose to fly it on their own while the instructor works with another student.

The IFR GIFT program works on any Redbird simulator with the latest Redbird Navigator software. Most sims currently require a Cessna 172 aircraft configuration, although Redbird Flight Simulations Vice President of Marketing Josh Harnagel said the company plans to expand the list of supported aircraft by the end of the year. A virtual instructor provides audio feedback—put down 30 degrees of flaps, or start your right turn now. After each flight, the program grades the pilot on elements such as altitude, airspeed, frequency tuning, and CDI deflection, measuring against the tolerances in the airman certification standards. The instructor soon will be able to track the pilot’s progress through an online portal, and, when her grades show she’s ready, they go out to the airplane and fly the maneuver.

The program is sold directly to consumers by participating flight schools for a suggested retail price of $249, and Redbird recommends schools charge a flat rate for unlimited simulator time while a pilot progresses toward a rating. That can save money in instructor fees and Hobbs time—but can an automaton really replace a living, breathing instructor? I climbed into a Redbird FMX advanced aviation training device with a beta version of the software in May to find out.

Harnagel, product owner for the GIFT programs and a CFI, started me off easy with a mission from the private pilot curriculum: a normal landing. As I flew through the gates in the sky that the software provides for guidance, I half expected the ding of Mario picking up coins—and that’s partially the point. Like a video game, GIFT has an objective, rules, and points. And, like a video game, it’s pretty easy to do pretty well, but progressively harder to make gains as you inch toward a perfect score. The same strategy that hooks gamers keeps flight students engaged.

But serious flight students aren’t playing games, of course. To guard against unfocused game play during unsupervised time in the simulator, the software ends the session if you get too far outside the bounds and, for instance, fly aileron rolls on the ILS.

"One of the key things that we want GIFT to enable instructors to be is better humans." —Josh HarnagelEven for disciplined students, time spent flying the simulator without feedback risks reinforcing bad habits, so the virtual instructor is a critical part of the program. I moved on to the dreaded Pattern A from the IFR program, and the voice coached me through turn after turn. Harnagel chimed in occasionally to help me navigate the Garmin G1000 interface since I hadn’t flown with one in years, and then he stepped out for the ILS to Runway 36 at Wittman Regional Airport in Oshkosh, Wisconsin. I was alone with the virtual CFI, delivering patient step-by-step instructions by rote so Harnagel didn’t have to.

“One of the key things that we want GIFT to enable instructors to be is better humans—essentially allow them to do things that humans do really well, and offload some of the things that humans don’t do very well,” Harnagel explained. “Things like rote memorization or objective scoring of specific maneuvers—we think human instructors are great and super important to teach students judgment, decision making, to help them overcome their personal fears and any issues they may have, but human instructors aren’t always the best at enforcing plus or minus 100 feet here, or plus or minus 10 knots there. And they’re not necessarily the best at delivering rote information consistently every time.”

Computers, however, are very good at delivering rote information. After my session, I reviewed the flight on the tablet in the sim. I nailed the CDI deflection, but my airspeed slowed throughout the approach, starting at a maximum of 93 KIAS and slowing to a minimum of 80 KIAS. A human instructor might have pointed out the trend, but the computer came with receipts: an objective, undeniable assessment of where I went wrong and by how much. Total score: 92.

In today’s connected world, devices from watches to thermostats grade us daily on our steps, our energy usage—even our sleep. Part of me resists one more device quantifying my performance, but here it actually makes sense. GIFT doesn’t replace an instructor, but it does the grunt work of instructing—and it does it better than a human can. (Not to mention it’s difficult to take feedback personally when it’s delivered by an algorithm.) If more time in the simulator means better time in the airplane, it’s a worthy trade.